If history has taught us anything, the answer to that is a resounding “NO”.

Is there anything worse than having front row seats to the big game, only  to find the star player benched with a torn meniscus? Or tickets to the hottest show in town, and that sad slip of paper flutters out of  your program, explaining that an understudy is filling in because the diva has polyps on her vocal chords?

Well, sure, there are lots of worse things. Ebola, for instance. But it’s Thursday, and I’m here and John isn’t, so here is your

Or perhaps you’re thinking “WHY, why is she here today?? I purposely skipped reading MH yesterday because they said she would be here on Wednesdays.”

And you were told that, you were…but you see, kids, to you, ‘Wednesday’ means the third day of the work week; the day your secretary wears her red skirt;  the night that Modern Family is on.  Maybe you’re even one of those miscreants who insists on calling it ‘hump’ day.

To me, ‘Wednesday’ is more of an idea; a dayish kind of time in the middle of the week.  It’s like how my daughter’s school tells me to pick her up at 3:15. To me, that means sometime after my nap but before my cocktail. And you know what? It always works out. Let’s just say I don’t believe in splitting hairs.

Netflix paid NBC 2 million dollars an episode for this show. I tried to watch it last night and gave it up after about 15 minutes to watch Muriel’s Wedding for the tenth time instead.

We wish we were watching Muriel’s Wedding, too. And we also wish John would come back.

It’s probably good. People seem to think so. It just seemed like one of those fast-paced, crime-type shows, where he’s all “I’m super smart and evil kind of like Hannibal Lecter” and she’s all “He doesn’t even know me yet he knows me so well, like a father figure which makes my attraction to him all the more confusing” types of shows,  and I couldn’t get into it. Plus her wig was very distracting.

No, not a metaphor about that punch-happy football player,  I’m talking about actual rice.

My mother, who is the best,  is under the weather. So yesterday I went to my folks’ house and made her some soup, of the healing, nourishing, chickeny variety.  Put the chicken in the pot, added onions and garlic and sent my dad to the store to get carrots and peppers and what have you, and as I’m standing at the counter, chopping and scooping and stirring, my mom, who is supposed to be convalescing in the big recliner,  comes shuffling up behind me and starts dumping something into the pot.

“Oh, it’s just some black rice. Your father and I got it at Trader Joe’s. I’ve never had it before. I thought we could try it instead of noodles,” she says, and shuffles back to sit down in her chair.

You know you’ve been a mother for a long time when even illness can’t keep you from messing with the soup. Or maybe she knows I’m JV in more ways than one.

The soup has now turned the color of sewage. The good news is, it smells awful. Like if feet had a baby with very strong cheese and mud.

I scoop out the chicken to remove the bones, and the meat is a terrible dark gray color. It looks about as appetizing as zombie flesh. 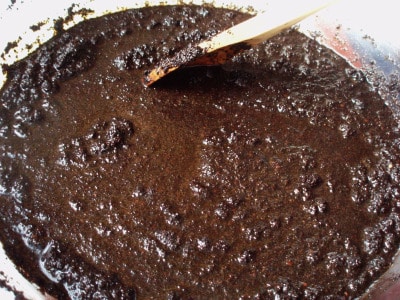 My dad comes in, peeks into the pot over his glasses and announces, “I’m not eating that.”

“It’s good,”  I say. I guess I thought I could fool him by saying that.

“Are you staying for dinner?” He asks me.

My mother is giggling wildly to herself. Some things are just worth it, I get that. And oftentimes a good laugh makes you feel better than a bowl of soup.

I wouldn’t eat me, either

Touchingly heartfelt, hilarious and  extremely crude. And the crude part, she was just quoting Howard Stern anyway. I think Joan would’ve approved. I say that like I knew her. Which I didn’t.

Speaking of funny ladies, I am very happy to tell you that the fantastic Tig Natarro is coming to my town, and I am going. She is someone who I actually fantasize about being friends with in real life.  I wish she’d return my calls.

I love you too, Katie!

I loved it. It was as terrific as the first one, possibly funnier  and like the first, had its moments of depth and thoughtfulness and subtext. That’s right, I said subtext. Do you want to punch me yet?

Also, this one is bright and tight and bursting with color and scenery, whereas the first one looked like maybe it was shot on someone’s phone.  And Steve Coogan’s hair is nice and short–compare:

And lastly, my friends, I round out my back-up five with

A few minutes ago, my household was thrown into a panic when I accidentally hit the ‘back’ button and everything I wrote here disappeared. Laundry baskets were kicked, blue words were expressed, a chocolate cream pie was sent airborne (that was immediately regretted and then said pie was eaten off the wall).

But all was well when I realized everything had been saved by the miracle gnomes of WordPress. My God, what a time we live in. But I also apparently bumped another button on my computer and was informed I had gone ‘incognito’.

What?? How fabulously mysterious. I don’t know what it means, but I really like the sound of it.

Seriously you guys, I just read that researchers have decided if your baby gets crabby when you leave the room, it means it’s going to have unhappy relationships as an adult. Whaaaaaaat?

Come on. How can they possibly know this? The only way to possibly know if this extremely alarming prediction is true would be to follow the crabby baby in question his or her entire life, watching and butting into his or he relationships, which would certainly give those relationships a higher chance of being terrible.

Change me or I’ll get divorced!

Woman on date: “Hey, uh, who is that dude in a lab coat whose been following us and listening in on us all night? It’s kind of freaking me out.”

Man she is on date with: “UGH is he here again?? GAAAAH! That BLEEEEEEP BLEEEEEPITY BLEEEEP has been following me my whole BLEEEEEEEEEP life! Where is he? I’ll kill him! Kill him I say!”

He flips the table over, sending spaghetti bolognese and wine everywhere and starts ripping the restaurant apart as the researcher in the lab coat makes his way out the back. Meanwhile, his date dials Uber.

6 thoughts on “I’m Not Sure What’s Happening”