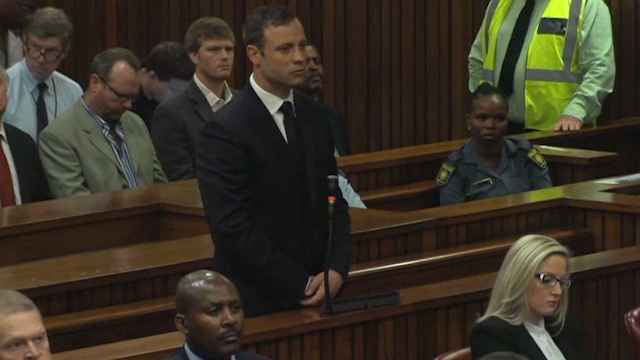 Will he serve time?

The accused, Oscar Pistorius, 27, is found guilty of culpable homicide, which means that he may receive anywhere between zero jail time and 15 years for killing his girlfriend, Reeva Steenkamp, on Valentine’s Day.

The judge, Thokozile Matilda Masipa, stated in her decison that Pistorious “has some African in him,” although to be fair, she was reading that decision. She also agreed to let Pistorius remain free on bail until the sentencing hearing begins on October 13. Pistorius has been out on bail during almost all of the trial.

As I’ve said before, I’ve always just wanted to ask Oscar, “Even if we believe you, do you not think that some amount of punishment for such reckless behavior is warranted? How much time would you give you?”

I think we all know the answer to that question, though.

Super major kudos to Deadspin for paying attention yesterday. Well, it certainly sounds as if someone got to Bill Polian between Appearance No. 1 and Appearance No. 2. “And another thing I’d like to say about ‘The Decision’…”

Meanwhile, Keith Olbermann, to his credit, will not abate his attacks on the credibility of the NFL and Roger Goodell. Watch how he goes for the Gene Rayburn mic prop at 4:25 of this video.

Yes, but is the fruit real?

As much as I hate-watched The Leftovers all summer, I did love the reveal on the season finale. Turns out the Guilty Remnant had one of the better Punk’d ideas of all time, re-creating all of the vanished from their town as mannequins and placing them where they’d been at the time of The Departure (sadly, Kevin Garvey’s motel paramour-or-less is not shown, which keeps this episode from receiving an A-plus).

Still, you knew something big was coming, and this lived up to expectations. Also, though I’m still not sure if Chris Zylka is a decent actor, he is really, really handsome (and as far as I can tell now has joint custody, along with his non-biological father’s girlfriend, of an Asian-African American baby. HBO’s got your Modern Family for you, ABC). And as for Holy Wayne, why did he stab himself to death in a men’s room in Mapleton? We’ll just have to wait and see next season, I guess.

*We have a winner… 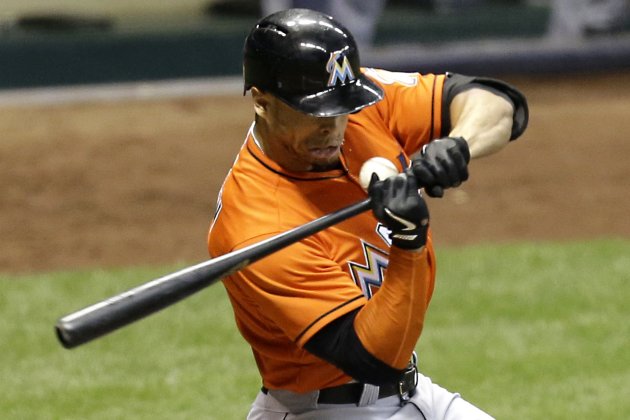 Major League Baseball goes all Men in Blazers as Giancarlo Stanton, the leading candidate for National League MVP honors –unless you’re voting for Clayton Kershaw– is struck in the cheek by a Mike Fiers pitch last night in Milwaukee. Stanton was also called for a strike on the play when he was struck, in case you’re looking for today’s literal example of “adding insult to injury.”

Stanton, who leads the N.L. in both home runs (37) and RBI (105), suffered facial fractures and is done for the season.

Chase Heady — “That’s Headley!”— of the Yankees was struck in the chin by a pitch as well.

So, yesterday Katie goes all “Me and Tig Natarro should be besties if there’s any justice in the world” and I’m feeling left out because I’ve never heard of Tig Natarro. So I did a little research. She IS very funny (oh, and minor thing, but it’s Tig Notaro). Anyway, I found this terrific monologue about Tig’s multiple run-ins with late 80’s/early 90’s pop diva Taylor Dayne. Worth your time. And here’s some solid stand-up from her.

Bill Clinton: “It depends on what the meaning of the word ‘is’ is.”

Maher has been on vacation since early August, or in other words, since before Ferguson, before the ISIS beheadings, before Ray Rice. He’ll air back-to-back live shows from Washington, D.C., tonight. There won’t be a dearth of available subject matter.