The NFL cannot be in too much trouble if it makes the cover of both The New Yorker and Time in articles based around how much trouble it is in. A couple of things about The New Yorker cover. First, as many people have pointed out, the po-po actually have a worse problem with domestic violence within the ranks than the professional football players do. Second, I think it would’ve been far more inflammatory if the cops were depicted shooting an African-American referee signaling a touchdown.

Time’s story is about a high school defensive back in Missouri who suffered a fatal traumatic brain injury making a tackle. Author Sean Gregory could have found similar stories all over the country — I remember the tragedy of Charles Youvella, who weighed just 115 pounds and stood 5’5″ and died during a 60-6 playoff loss last November. Youvella had scored the game’s only TD.

Football can be a very violent game. I can write highly obvious sentences, too. As long as there is testosterone, males will play games of varying violent degrees. I don’t think football is going anywhere. Does the violence in football directly correlate to the misdeeds of Ray Rice, Greg Hardy, Jonathan Dwyer and Adrian Peterson, et al? I really don’t think so. But that’s a little more complicated.

By the way, speaking of Time magazine covers and football, how about this?

Dondre Harris, 7-foot and 380 pounds. Somewhere Michael Lewis is snooping around about his back story.

I thought I’d engage in a little tone-deafness this morning –you’ve inspired me, Tallahassee– by following a piece about violence in football with a quirky note about a giant playing high school football in Virginia.

This is Dondre Harris. I don’t know much about Dondre except that he stands seven foot tall, weighs 380 pounds and is a senior defensive tackle at Essex High School in Virginia. Obviously, it’s not Harris’ fault that he is this size –let’s blame his parents and perhaps the local potable water supply. Still, can you imagine being the size of Charles Youvella and coming across Harris? There’s no real solution to this dilemma, but just remember that F=ma. Force equals mass times acceleration.

Harris still has not received any scholarship offers and I haven’t seen him play. But if there’s a George Whitfield of linemen, I bet he’d love to meet Dondre. 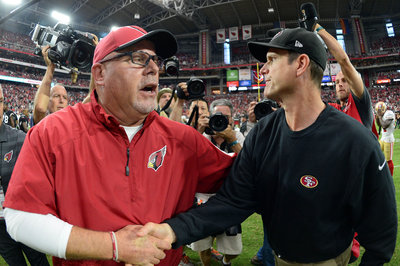 Is this Jim Harbaugh?

Or is this Jim Harbaugh?

I didn’t realize these were from different contests and years at first, as the coaches are wearing the identical garments. It was Harbaugh’s pen necklace that revealed the difference for me –that and his wildly different demeanor.

Hey, nobody likes to lose, Jim. But there really isn’t a more petulant child in all of the NFL than he.

4. Would You Miss Miss America?

Of course John Oliver and his writing staff have more time than, say, his old boss Jon Stewart does to develop harsh and hilarious rebukes to all that is wrong with the world and in particular the USA. Of course. Still, what a magnificent job he does every Sunday night firing arrows at corrupt or flawed institutions.

Two nights ago on “Last Week Tonight” Oliver pointed his tongue at Miss America and, in particular, its claim that it provides $45 million in scholarships to women each year. Lots of great moments here, from Donald Trump telling a female reporter that she wouldn’t have her job if she weren’t attractive, to a recent contestant actually being asked a question about ISIS and beheading and positively nailing it in 20 seconds –I hope she won– but my favorite moment comes at the end when Kathy Griffin tells him, “When I look at Giuseppe, I want to have sex with him. And when I look at  you, I want to have sex with Giuseppe.”

5. You Gonna Stick With That Story?

Last Thursday afternoon Jill Tarlov, 58, was attempting to cross West Drive in Central Park after having shopped for her daughter’s birthday present. Tarlov was in the crosswalk, though I don’t know if she had the right of way with the traffic light, and I don’t know whether or not she was talking on her phone.

Just then Jason Marshall, 31, came cycling down that grade –the area is just below the finish line of the New York City Marathon, and going in this direction cyclist are gathering up some downhill velocity– yelling, “Get out of the way!”

Tarlov did not get out of the way. And Marshall, say police, swerved to avoid a group of pedestrians but then struck Tarlov. I know, you’re wondering, so let me tell you: Marshall’s bike was only minimally damaged.

Tarlov died from her injuries. Doctors who examined her at New York Presbyterian Hospital said her injuries were consistent with those of someone who had been struck by a car. Through his attorney Marshall yesterday said that he was “deeply saddened” by Tarlov’s death –I suppose he is– and that it was “an unavoidable accident” but also that he was proceeding at “eight or nine miles per hour.”

I can see Marshall’s claim that, at eight or nine miles per hour, the fatal accident was unavoidable, because like you I saw the original Austin Powers movie.

The New York Post, never one to raise racially charged hackles, describes the white Tarlov as “a beloved Connecticut mom” and the black Marshall, who is a baritone sax player and lives in East Harlem, as “an out-of-control bicyclist.” So they’ve already made up their minds.

I imagine Marshall, a triathlete, is probably upset about Tarlov’s death –and the fact that police have confiscated his $4,000 bike as evidence, though he has not been charged with a crime as of yet –but it’s almost impossible to imagine anyone being struck by a bicycle going less than 10 m.p.h. even being knocked to the pavement, much less being killed. And it’s not going to help Marshall that he keeps an on-line log of his training and clocked himself going 35 mph on a morning ride earlier that day (speed limit in Central Park for cyclists is 25 mph).

Postsript: On Saturday, just one day later, I ran a loop of Central Park. There was a police car parked at one light up in the northern end of the park (other vehicles are prohibited from being in the park on weekends, though cyclists are supposed to obey the traffic signals). The light was red and about half a dozen cyclists were stopped next to the cop car. Then a cyclist rode through –he happened to be African-American–without stopping. The cop car never moved. The cyclists just looked at each other like, What was that all about?

And of course the entire point of this item was just a lame excuse to brag that I’d run a loop of Central Park. At my advanced age. But I am really slow. Really slow. Like, in the eight or nine miles per hour range these days. 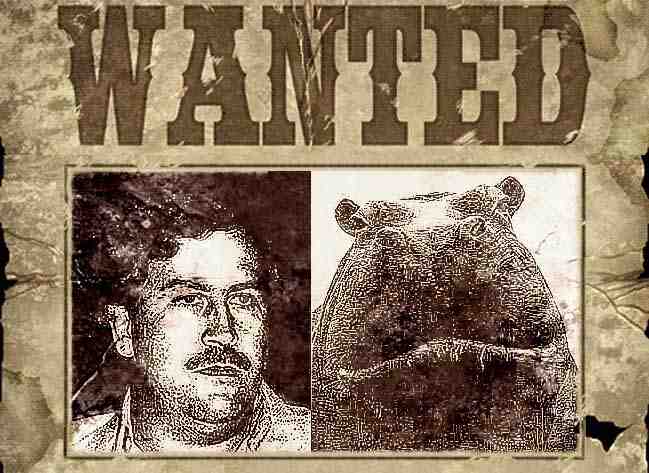 I’ll admit. I saw the title, read the blurb, and I stopped looking for other shows. Pablo Escobar left behind pet hippos that are now terrorizing local residents??? Was this in the script for Medellin???