The first pitch from Clay Buchholz was low and outside. Derek Jeter stared it through the strike zone, bending over as if to examine its course more intently. It looked like a ball, but the umpire signaled strike.

It was a meaningless early autumn game between two franchises unaccustomed to playing meaningless early autumn games. Particularly versus one another. The sky was cerulean blue, not a cloud to be seen. TBS was airing the game, even though at least five other Major League games had playoff implications on Sunday. Ernie Johnson had the call while another legend at the position, Cal Ripken, Jr., was his partner in the booth. Fenway Park on this day borrowed the moniker normally attributed to that other park opened in the ‘teens of a former century, “the friendly confines.” Not only was there a complete dearth of hostility, there was a climate of love.

The sky was abnormally brilliant on this afternoon. It felt a little like the day another Yankee shortstop made history here.

The second pitch was a ball. Ichiro Suzuki, who himself will end up in Cooperstown some day, too, stood on third base, having just tripled in a pair of runs to give the Yankees a 3-0 lead. Ichiro batted lead off and Jeter second on Saturday and Sunday, a tribute, it seemed, from manager Joe Girardi, to the two future Hall of Famers in these games.

The Fenway faithful, so conditioned to chant “Yankees suck!” at the sign of those interlocking NY ball caps, instead chanted “De-REK Je-TER!” Forty-six years ago on this day, in this ballpark, another Yankee with a single digit uniform retired: Mickey Mantle. The Mick was only 36 in 1968, but his body was broken. He batted .237 that season and played first base. Can you imagine how Twitter would have savaged him? Mantle had wanted to retire after 1967, but the Yankees lured him back with an offer of $100,000. Derek Jeter earned 120 times that in 2014.

Not unlike Mantle, Jeter’s status owes as much to his aura and legend as to the actual numbers. You think Jeter is overrated? The Mick had 1,000 fewer hits and a .298 batting average (Jeter finished at 3,465 hits and .310). Of course, Mantle hit for more power and, when healthy, was a fantastic center fielder. He had more talent than Jeter. But he squandered a lot more talent with a robust appetite for nightlife. Mantle was a swinger in every sense of the word.

The litany has long been Ruth, Gehrig, DiMaggio, Mantle. You can argue all you want that there were better Yankees than Jeter besides those four, but only his name will join theirs. Teammate Mariano Rivera was the greatest closer of all time, pure class and a deservedly beloved player (unlike Jeter, he actually gave reporters anecdotes). Some people will invoke Mo’s name, too, but more out of a sense of obligation to the numbers. Jeter’s name will come quicker. He is the fifth Yankee immortal.

The third pitch from Buchholz was sliced foul, a sharp liner into the seats beyond first base. Someone earned a nice souvenir. Now Jeter was behind 1-2 here in the fifth inning. He was 0 for 2 on the day.

How strange to witness a Yankee-Red Sox game from Fenway that did not feel like a heart attack, but rather a coronation. Game 4 of the ALCS, October 17, 2004. One day earlier the Yanks had won 19-8 in Fenway to take a 3-0 series lead. When I boarded a plane in Phoenix on Sunday evening the Yankees held a 2-0 lead in Game 4.

Four-plus hours later I landed at Newark and hoped to get word that the Bronx Bombers had ousted the Sawx. Instead, the game was still in progress in the 12th inning. David Ortiz ended it shortly thereafter. That series, and the 2001 World Series versus the Diamondbacks, which featured three clunker games and three classics (one of them auguring the Mr. November nickname as Jeter hit a walk-off home run in the first World Series game to be stretched into the 11th month), are the two that I’ll remember best from the Jeter era. Even though both ended in failure.

The fourth pitch was a fastball. Jeter smashed it directly into the dirt. The ball took an insanely high hop –a Baltimore chop as Baltimore’s most legendary infielder looked on from the TBS booth–and if you were watching, you just smiled.

Of course The Captain will get an infield base hit on his final day as a Major Leaguer. Only one man in the game’s history has more recorded infield hits than Jeter and that man was chugging from third to home on contact. The Red Sox third baseman, whose name I’d never heard before, attempted to bare hand it but failed to grasp it. Base hit. RBI.

Inside the dugout, manager Joe Girardi tried to get Jeter’s attention. He ran his hand across his neck a few times, gesturing to Jeter if he wanted to come out. He did. The crowd, already standing, roared louder. Jeter’s mother, wearing sunglasses, wiped away tears.  No. 2 smiled broadly as he jogged off the field, hugging teammates and doffing his cap. If the years have not been kind to his hairline, they have been to everything else. He looks and runs much the same as he did as a 22 year-old rookie. The smile is as effervescent; not at all jaded. To quote Billy Crystal’s fine ESPN tribute, “This is a ballplayer.” “Maybe all I know about Paul is that he was a fine fisherman,” Norman MacLean tells his father about his brother after his departure in A River Runs Through It.  “You know more than that,” the father replies. “He was beautiful.”

This is true. Derek Jeter loved being a Yankee the way Paul MacLean loved being a fly fisherman in Montana. He had the great good fortune of doing exactly what he’d always wanted to do in life and even better, he never once took it for granted.

Those of us who have lived in New York City, who have followed his career, all of us are older this morning. And not just by a day.

(By the way, one of my very favoritest writers of them all, fellow Valley of the Sun high school grad JR Moehringer, penned a magnificent elegy to Jeter on ESPN.com. Give yourself a little time to read it…and subconsciously, I guess that’s where I pilfered this hed)

Kimetto shatters the existing world record in the marathon by 26 seconds, wonders if they’ll refund his entry fee

See, Berlin used to have a wall. And marathoners are known to hit a wall. But yesterday at the Berlin Marathon Kenya’s Dennis Kimetto crashed through a wall by becoming the first human to go under 2:03 in a marathon. Kimetto’s world-record time of 2:02:57. He broke the world record, set in this same race last year, by 26 seconds. It may be time to start thinking that someone will go below 2:00 this century. Which is insane.

Kimetto also earned a free T-shirt and got to choose whatever bagel he wanted at the post-race refreshments table.

3. Football In One Easy Sentence 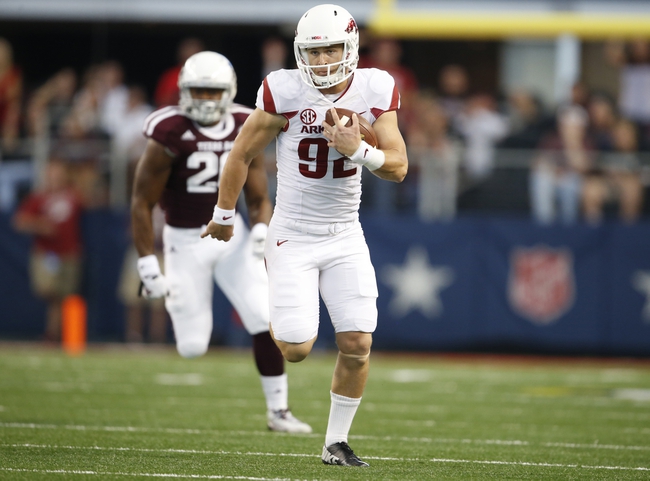 What in the Sam Irwin-Hill is this? Arkansas’ Aussie punter takes a fake 51 yards in for a TD

p.s. This was the most successful fake punt of the month by a school with Arkansas in its name, but not the most creative.

I missed it, but Saturday Night Live launched its 40th season on (well, you can guess the day) and the breakout star was a kid who is literally only half the show’s age. None of SNL’s male rookies of a year ago made an impact, but Pete Davidson only 20, showed up with an extra carton of swagger in his lunch box. It was his first show, but the kid won the audience over right away.

Hey, Pete Davidson just looks funny. And he is funny. And he enjoys being funny. It’s amazing how few cast members on SNL have gotten this over the years.

Not registered at Dollar General

As loyal reader An Inconvenient Ruth noted, George Clooney, 53, got married this weekend “to a barrister, not a barista,” Amal Alamuddin. Though it was even money up until he said, “I do.”

Medium Happy was invited to the nuptials, but had to send its regrets with a request to “Invite us to the next one.”

Hopefully, George is not a “silly man” who “loves trains” and never finds himself in a scene like this. Particularly because the party of the second part is already a lawyer.  That’s from Intolerable Cruelty, a tiny gem of a Coen Brothers movie from 2003 (and, by the way, why was Richard Gilmore stepping out on Emily?)