“I love advertising because I love lying…”

Remember when everyone simply assumed that Larry David was the mean one of the duo and that Jerry Seinfeld was so unfailingly nice (“How could anybody not like you?”). Well, maybe Jerry was always just as “mean,” and maybe what mean really means is honest. Which does not always sit well with people, especially when the arrows of candor are pointed at them.

So here’s Seinfeld accepting a Clio award on October 1 and then absolutely eviscerating the chosen profession of his audience. The only other place you’ll find commentary both this candid and caustic right now is on Last Week Tonight. I’m glad for Jerry that he is enjoying semi-retirement; but we need his voice.

A sample of his speech: “I think spending your life trying to dupe innocent people out of hard-won earnings to buy useless, low-quality, misrepresented items and services is an excellent use of your energy.”

And they cheered. Classic!

2. The Kid Stays In the Picture Props to Ellar Coltrane, who spent more time start-to-finish working on a film (Boyhood) than Tom Cruise did for Eyes Wide Shut. The film’s second half is so much better than its first half, and Ethan Hawke, whom you go into the film expecting to be the typical deadbeat dad, may be the most likable and just plain decent character. He explodes all your preconceptions.

As you know, the film was shot over 12 years, at about two weeks per year. The filmmaker, native  Texan Richard Linklater, never overtly informs the audience about time passages, so it’s fun to watch how Coltrane’s Mason ages, via changes in hair style and a rapid growth spurt.

Coltane and Hawke: The film’s best scenes occur when it’s just the two of them.

The final scene takes place in Big Bend National Park, and I loved it because you have to think, as my friend Chris Corbellini noted in his MH review, that Linklater began the project all those years ago with this final scene in mind. One reason it struck a chord with me is that perhaps my favorite movie –definitely my favorite sleeper film–is Fandango, which is also an entirely-in-Texas film whose climactic scene also takes place in Big Bend. The only difference is that in Boyhood, the characters are in their first day at college, while in Fandango they’ve just graduated.

But, the themes are nearly identical. I know that Linklater is roughly my age and that he is a lover of all things film and Texas, so this correlation cannot be coincidence. Can it? 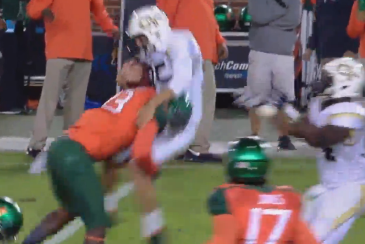 America, for your own safety, would you please stop trying to fake-punt versus Miami? Thank you…

I wrote like, what, 2,000 words this morning on the previous weekend in college football. So as soon as it’s posted on Newsweek.com I will link to it here. Thanks. In the mean time, enjoy this clip that will exorcise the ghosts of Joel Williams and Derek Brown, former Irish tight ends who were not as successful at the end of games in that very same corner.

I know what you’re thinking: Where’s his left hand?

TMZ had reportedly obtained ($$$$) audio of actor Stephen Collins confessing to his estranged wife, actress Faye Grant, that he molested and exposed himself to at least three young girls.

I will confess that I didn’t watch Seventh Heaven without wondering whether, at the time, Jessica Biel was 18. Oh, like you’re going to judge me. I always thought it would’ve been cool if the Camdens had relocated to Starrs Hollow. I think Jess and Mary Camden would’ve made a rockin’ couple.

The critics appear to be agog over The Flash, the new CW series about the world’s fastest man, according to D.C. Comics. The Flash was my favorite superhero as a boy because I didn’t want to root for the big favorites and I appreciate promptness, which it would seem The Flash would have down.

Anyway, please watch it. Our man Barry Allen/The Flash, the man with the lightning bolt on his suit, is played by Grant Gustin, who used to be on Glee as Sebastian. And one of his mentors, Harrison Wells, is played by our friend Tom Cavanagh, who is too good of an actor to have been away from the screen for this long. Tom suffers from Austin Murphyism, a dreaded condition in which one never ages and remains eternally fit. It’s dreadful. 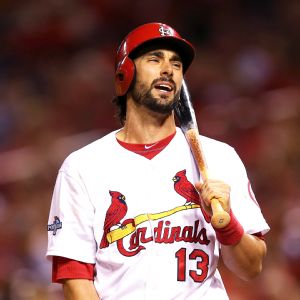 The most celebrated Carpenter since Karen (you thought I was going to go with Joseph?)

Are the Cardinals really going to usher out the Dodgers, and quite unceremoniously, for the second consecutive year? Yasiel Puig, who tripled and scored LA’s only run last night but who has also struck out seven times in the past two games, has been benched. Clayton Kershaw, who for the first time in 68 starts failed to hold a lead when staked to four runs (the Dodgers led 6-1 entering the 6th inning in Game 1), will start on three days’ rest. And St. Louis’ Matt Carpenter, the All-Scrappy Player poster boy player of the 2014 postseason thus far, has homered in three consecutive games.

Nothing in the Dodgers’ makeup the past two seasons suggests they’ll rise to the occasion today. If you remember last year’s NLCS between the two, the Cards ambushed Kershaw for seven runs in four innings, his worst outing of the season, in the Game 6 clincher in St. Louis. This smells similar.

And yet in Kershaw the Dodgers have the best (regular season) starter since Bob Gibson or Sandy Koufax on the mound for them.  He just happens to be 0-3 with a 7.23 ERA lifetime as a starter in the NLDS.