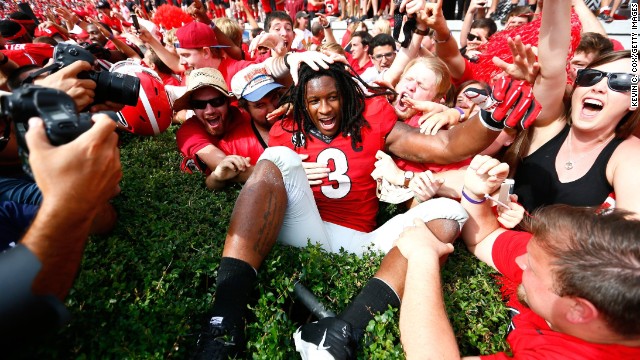 Clearly, there’s no interest in Gurley as a marketable commodity at the college level

It’s not about vilifying a college athlete whose value to his school, to CBS and ESPN, to Mike Slive and the SEC, and to Nike, is worth millions if not ten times that for taking a little money under the table for his autograph. Really, it isn’t.

It’s about someone who, by donning the uniform and in particular donning the captain’s “C” is making it clear that he wants to participate in this game. And, like any game, it has rules. And you don’t get to a la carte the rules.

So Todd Gurley, our preseason and midseason favorite for The Grange Award, will now sit out the Missouri game if not more. The good news is, there’s no character clause for the Grange. The bad news is, I’ve got to hear athletes’ rights-without-conditions pundits wax profound the next few days. That’s fine, I’m sure they’re even more sick of listening to me.

I do have one more item to add, though: Did you ever notice that as soon as a privilege is extended to someone, it isn’t long before they consider it an inalienable right? I found it amusing this morning when Phillip Daniels, father of Frozen Fiver DaVaris Daniels, weighed in on players’ rights by tweeting: “Not saying college athletes need to be paid like the professional athletes but give them something or at least let them use their brand!” 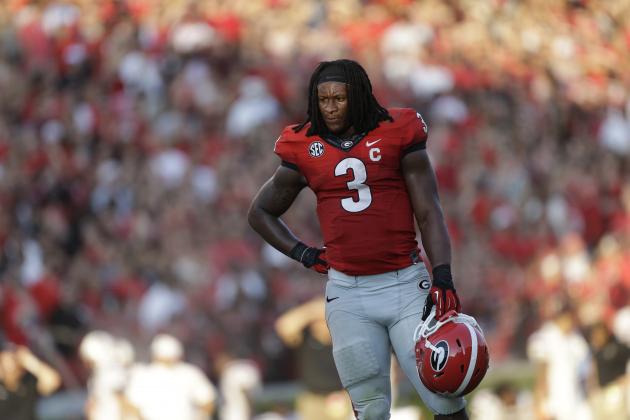 So what will I do with a free weekend in Athens?

You can make that argument. You can also argue that Notre Dame is saving Phillip Daniels $200,000 by offering his son the opportunity to receive an education at a Top 20 academic institution. And maybe, just maybe, Mr. Daniels could see it within himself to give his son a few dollars’ spending money seeing as how much money his son, in conjunction with Notre Dame, is saving him.

Aye, but there’s the rub. Big-time football players have been getting full-ride scholarships for so long that many of them don’t even consider it a privilege. Or a huge financial windfall. Maybe they or their parents don’t even value what that degree means. I don’t know. I’m just the guy who will be the pain in the ass (shocker) reminding people to walk it back when they say college athletes deserve to get paid. The Utes went 12-0 in 2008 and were denied a shot at the national championship. It turns out a “playoff” would have screwed them just the same.

For years I heard how unfair the BCS was and it was often cited, by paid college football pundits who were clearly in favor of a playoff (because not a few of them are also hopelessly in love with March Madness and feel that college football would be better off imitating that model), that schools such as Utah in 2004 (11-0) or Boise State in 2006 (12-0) or TCU in 2010 (12-0), etc., were being unfairly marginalized by the BCS.

How, the pundits wondered, could you purport to have a fair system of determining a champion if you exclude an undefeated team from the championship game? To which I always replied, “You’re right. No unbeaten should be excluded and in such years, and only in such years, when we have that situation, there should be a four-team playoff.”

Well, guess what happened. A four-team playoff came about –not because of anything I said, but rather because John Skipper and Mike Slive and Larry Scott and a few very other POWERFUL men associated with college football’s windfall saw the value in adding two extra meaningful games in January. Voila!

And so the next step was to sell it to the audience as, “We hear your plea.”

And then yesterday, in Dallas, a few of the more respected names in college football punditry and reportage gathered and, per the Playoff Selection Committee, were tasked to choose a playoff four from the 2008 season. And so these men and woman (ESPN’s Heather Dinich) gathered and chose a final four: Florida, Oklahoma, Texas (which earlier in the season beat Oklahoma) and USC.

Four fantastic, worthy teams. Each of which had one defeat before bowl season. The 2008 season was one of the best in recent memory (Michael Crabtree’s TD catch, anyone?) and you can make a valid argument that those were the four best teams.

But what about Utah? The Utes were 12-0. They got slighted, then were given a lovely parting gift of playing Alabama in the Sugar Bowl, and promptly rolled Tide.

But yesterday’s Mock Selection Committee, composed entirely of media who would not be predisposed to lean toward the Power Five (while the actual Selection Committee will be), still chose to exclude Utah. So, I mean, what’s the point? Other than having a playoff for playoff’s sake.

And so here sits 5-0 Marshall, and I hope the Thundering Herd know that winning the next seven or eight games in a row still won’t get them to the final four. But they can enjoy reading all the wonderful and enlightening pieces that were written explaining to us what a tough job the Selection Committee will have.

Instead of spending six hours on this, the Mock Selection Committee would’ve been better served sharpening knives and learning how to split hairs. Because that’s what this is going to come down to, anyway. There’s no objective means to separate four from five. All we do know for sure is that the oligarchy will be preserved, and none of the writers who attended yesterday’s session, at least to my knowledge, have shared that truth with us.

By the way, have you noticed how much more ornery I am lately? I have. I have, like, at least 36% more orn than I normally do. I’m not sure why. Perhaps I should consult a physician if this orn last for more than four hours.

Even Willy Wonka is trolling Journey? How about “Stone In Love” or “Still They Ride” or “Girl Can’t Help It?”

So the Rock ‘n Roll Hall of Fame, a.k.a. Jann Wenner’s personal totem of inflated self-importance, released a list of 15 acts that were nominated for induction into the Hall for 2015. Some of those acts are worthy (Lou Reed without a doubt; same for Kraftwerk and The Spinners), but none of those acts are Journey, a band that committed the heinous crime of never being cool while recording a number of infectiously popular hits.

Rock-and-roll is supposed to be a refuge for the freaks and geeks, the outcasts (and Outkast) and even the losers (get lucky sometimes). But the folks at Rolling Stone, i.e. Wenner, have long seemed to have a stick up their asses if any band seemed not to be authentic enough for their tastes.

Also not nominated….again. Damone is still trying to unload a pair of tickets to Friday’s concert

There are Journey songs that I loathe (“Separate Ways”) come to mind. But you can’t just totally treat a band that wrote “Don’t Stop Believin'” and “Stone In Love” (this may be my favorite video…Can I nominate these dudes, Jann?) as if they are the 2008 Utah football team, can you? Pardon me while I ask the Rock and Roll Hall of Fame Mock Selection Committee. You board the L train in Williamsburg at the Bedford stop bound for Manhattan or at First Avenue in Manhattan headed in the opposite direction. Either way, there’s a decent amount of time between stops as your train literally travels beneath the East River. Which makes you a rapt audience.

Three to four to even five young men, usually black, spring from nowhere and in a cheery voice announce, “Showtime! Showtime! Showtime!” One of them produces a boom box and clicks it on. And the next thing you know, the rails of the car become a jungle gym.

For what it’s worth, I attempted the grab-the-top bars-and-flip maneuver successfully last night. There may have been alcohol involved.

Chris Rock used to say that every father’s duty was to keep his daughter “off the pole.” He never said anything about sons.