In keeping with our “October is Ebola Awareness Month” theme, I will now share with you the story of my first make-out party, which rightly and scarily coincides with our  “Halloween Stories, Every Wednesday This Month” theme. Zeichenpress.com wants you to turn that frown upside down!

It was 1978. I was in fourth grade and had made friends with a girl in the fifth grade, which was pretty much like winning the lottery.

She was a new student to my tiny Catholic school–she came over from the public school down the street.

I had to walk past their playground every day to get to mine. The taunting! My God, the taunting.

OK, that’s not  true, I knew the words and used them liberally, thanks to a little something in our kitchen called the ‘Stupid/Shut-up Jar.’

My mom converted an empty peanut-butter jar into a depository in which we had to pay a quarter every time we called each other stupid or told each other to shut-up, her absolute pet-peeve. We took that thing and ran with it, scrounging everywhere we could for loose change to buy ourselves some swears.

So, fine, we were potty-mouths, but still. Those public school kids wore Toughskins, for God’s sake. 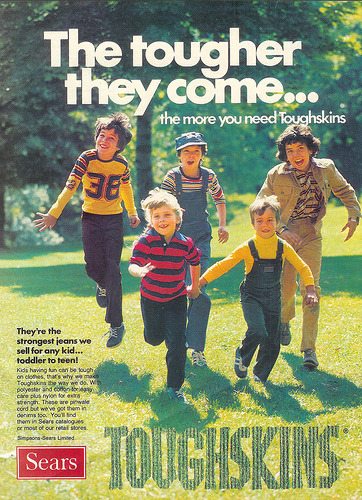 What you don’t see is who they’re chasing

I know what you’re probably thinking: “What does this have to do with Ebola or Halloween? And don’t you have like 900 older siblings? Didn’t they protect you at all? Are you ever going to write about sports??”

It has to do with Ebola in a roundabout way because it’s momentarily keeping your mind off your looming, hideous demise (but can we agree, blessedly quick? If I were the Ebola PR person, that’s the tack I’d take–It’s horrible, but quick).  The Halloween aspect will become apparent, and no, no sports. I thought I’d made myself clear about that.

As for my siblings…

In theory me, two of my brothers and their neighborhood friend/basically adopted brother were supposed to walk to school together, but more often than not I got distracted by something (the irresistible urge to hop upon the stone balustrade of the neighbor’s patio and belt out a few show-tunes comes to mind–how I longed to be a Von Trapp–as does the need to see how many hand-lengths it was across the weird gravestone-looking hitching post planted in the boulevard, every single day) and they needed to move on without me, lest they be marked tardy. I had sooooo many tardies…so very many.

My point is, my slight-to-moderate OCD tendencies made me a “difficult” walking-to-school companion, not to mention a deliciously meaty, black-watch plaid-wrapped chew toy for the junkyard dogs on that public-school playground. Thank God they were penned in by a tall chain-link fence.

No wait, that isn’t my point. Back to my fifth grade friend– she was the coolest, and she invited me to her Halloween party.

She met me at her door dressed in pigtails (the ‘high-atop the head’ kind, the kind that say “I am an anime prostitute”), short-shorts and a bib, holding a blanket and sucking a pacifier.

You’re confused, right? Tell me about it. I was a ghost; white sheet, white face paint, black ghoulish eyes. You know, because it was a children’s Halloween party.  We walked into her living room, lit only by glow-sticks and a mirror ball. No parents were in sight; her teenaged sister was leading the festivities. I saw shadowy figures. Are those…boys? Oh dear God, there are boys in here.

But that, m’friends, was just the tip of the iceberg. Another girl,  dolled up as a comely Pocahontas and who I recognized as one of the snarling jackals from the playground, threw me a glow-stick and informed me I was to dance with the boy who held it’s match, behind me.

I turned to face a red-faced kid dressed in his baseball uniform with a look on his face that said very clearly that he was not interested in dancing with me. I think he might’ve even groused “I have to dance with that?” but I’m not sure, since the flood of shame and mortification rushing in my ears may have drowned it out.

“Kiss, you guys!” The nurse hollered, and with that she turned to her dance partner and they embarked on some grade-A muckling. Baseball boy turned on his heel and walked away. I turned to my friend and said I didn’t feel good.

You want me to do what, with who??

My mom came and got me about ten minutes later, and I do believe that if she is reading this right now, it is the first time she has ever heard the true story of that night.

I never did subscribe to the “sexy Halloween costume” thing,  not even later when it was slightly less disturbing. When I was about twenty, my girlfriend and I dressed as a scantily-clad Peter Pan and Yul Brynner, respectively. Guess which one I was?

It was a mash-up Yul, too–I had the bald wig/braid combo from The Ten Commandments and the silk pajamas and pointy shoes from The King and I. Surprisingly, it got me zero action.

I bet you’d like to buy me a drink.

Kit Kats. Hands down. Anyone who disagrees with me is dead wrong. I love most of the mini-chocolate bar offerings, but Kit Kats are the perfect combination of crispy, creamy and just unsatisfying enough to ensure you eat 10,000 of them.

Worst is by far, candy corn. Candy corn is awful. It’s even worse than the homemade peanut-butter-and-coffee-grounds granola balls wrapped in cellophane the local hippie gives out. It tastes like if ear wax and sugar had a baby.  The only thing more offensive than the way it tastes is the way it looks. Off-puttingly bright, cartoon candy.

The good news is, you won’t poop for a week!

There’s been some blow-back at her appointment;  some folks say she’s not a good choice for the job because, um…well, it seems that…mmm…she’s not quite… credible.

She’s hit back by saying “‘I know I’m not a model but you have to see what’s inside, not the packaging,” which, in my opinion, would also make her a poor choice for minister of snappy comebacks.

Here’s the thing though, Mags, it is about the packaging, if we’re talking about health. The packaging we all carry our beautiful, flawed, fried-chicken craving  souls around in, and how we take care of it.

Now, if she’d been appointed “Minister of Beauty” or “Minister of Being a Smart Doctor”(she’s an M.D.) and people were remarking on her size, I’d say lay off.

Maybe the plan is, she does a health-kick type thing and asks the country (which has a 47% obesity rate) to join her in her efforts.  That would be cool, like “If I can do it, you can too!”

3. This Halloween-centric Ad I Found On Craigslist

I got a invited to a weird halloween party and need some help. The party has some rules:

1) Men have to wear women’s costumes and vice versa

2) You have to have someone of the opposite sex who isn’t attending pick out the costume. Very little input from me is allowed.

This isn’t normally my thing but I have heard the party is a ton of fun so I am looking for a woman to help pick out a costume.

We’d meet at one of those costume superstores. You’d pick out some costumes for me to try on.  We’d see how they look and you’d pick one.

If you are interested in weird, fun jobs, let me know.

Tell me how to contact you and what times you might be available as well as what you would charge for 1-2 hours.

Kudos to you for resisting the urge to come right out and write “If you’re interested in being murdered and found in a dirty public bathroom wearing a Winnie-the-Pooh costume, please respond.”

Good Luck with your project!

You guys, this is so weird…I just changed my name to Amal Clooney, too.

It was twenty years ago yesterday that Pulp Fiction hit the big screen. I must be the only person on the planet who does not like this movie.

I don’t get it. I tried to sit through it again to see if I could see what everyone else sees, and I didn’t get it again.

Cool people get it, Katie

Until next week, compadres.. 13 thoughts on “IT’S HAPPENING, AND A LITTLE TOO QUICKLY FOR MY TASTE”