Strike a Posey: Buster and the Brobdingnagians could win a third World Series title in half a decade, though they scare no one during the regular season

By the way, in three of those five seasons the Giants or Cards entered the postseason with the fourth-best record among Senior Circuit teams. Remember in late September, it was the Giants who were the last team to qualify for the playoffs in the N.L. while the Kansas City Royals trailed by four runs entering the 8th inning of the wild card game.

Exactly how much do those 162 games mean? The Giants and Royals are a combined 16-2 in the postseason.

And yes, Ishakawa’s pennant-clinching home run brought back memories (at least memories of seeing the footage) of Bobby Thomson’s 1951 blast in the Polo Grounds (even though the Giants were reportedly stealing signs, though, so what? Come up with better signs!). Two of my uncles were at that game (one was a great uncle; the other was a Great uncle). 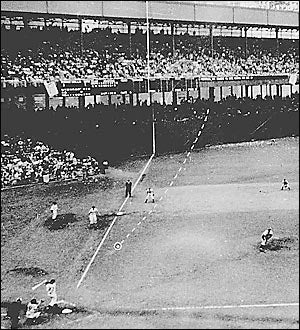 It’s true: Thomson’s blast launched the American Revolution. (Check out how that left field wall fades out toward center)

Ah, yes, the Polo Grounds. Which 90 years ago tomorrow hosted the Notre Dame-Army game that provided us with Grantland Rice’s lede, which today most editors would’ve cut because it did not provide the final score.

So, the past couple of years, Arizona State has scheduled “blackout games” (unlike Roger Goodell’s) in which the Sun Devils wear black and the school’s students have been encouraged to dress like Vidal Sassoon hair stylists. And, of course, because it’s ASU, some students have taken it too far and worn black face to the games. This has been taking place since at least 2011, as you can see above.

So, in a move designed to curb the behavior but also unintentionally bringing unwanted recognition to the school (can’t we just click our heels and repeat “Pat Tillman” three times and it’ll all go away), ASU has publicly warned fans to not wear black face paint to football games (the Sun Devils had a “blackout game” versus UCLA on Thursday night, Sept. 25, which then morphed into a “blowout game” when the Bruins put a 62-27 hurtin’ on them).

“Did you hear me!?! Take that face paint–ohhh….never mind.”

Because, you know, Arizona wouldn’t want to suddenly garner a reputation as a less than racially enlightened state. These fans in face paint could give the state aunwanted negative publicity.

3. A Panoply of Penelope

Cruz, from Spain, turned 40 this year, so this will be her sexy decade.

So Esquire named Penelope Cruz as its “Sexiest Woman Alive” and I’ll admit that the above photo is a compelling argument. Meanwhile, let’s not forget the world’s other noteworthy Penelopes:

Penelope Pitstop: Baby, you can drive my car.

Penelope Pitstop, who had a thing for fast cars and cartoonish love interests…

“I was named ‘Sexiest Woman Alive or Dead’ so…”

Penelope from SNL, the queen of one-upmanship…

I must confess: Half the reason I did this was because I know Greg Auman will spend the next five minutes attempting to think of other Penelopes. It’s up to 2,000 signed items attributed to Jameis Winston, many of them authenticated one right after the other –meaning they were most likely turned in by one person –and yet Jimbo Fisher and Florida State don’t want to know a thing about a potential NCAA violation until after the 2014 season.

Yesterday Christine Brennan of USA Today referred to the school as “Jameis State”, and she’s correct. As I told Jack Arute and Gino Torretta on Tuesday –I may have run into them at the men’s room at Chipotle– what we have here is a 30-pound tail wagging a one-pound dog.”

As a college football fan and as a Notre Dame alum, I want Jameis to play. I want the Irish to win or lose taking FSU’s best shot, and I want FSU to live down to the standards we all know it has set for itself: as a school and a community that puts winning above integrity. Don’t go changin’ on us now…. 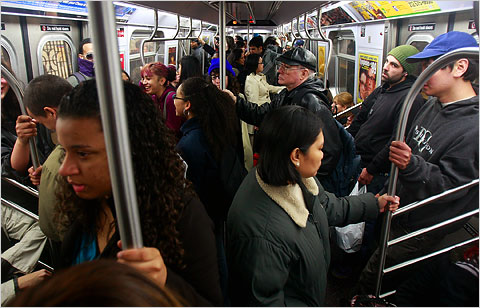 A crowded subway car in Manhattan, after 10 p.m.

In a corner seat that would normally seat two people, an amply-sized man is taking up the entire seat and speaking very loudly to no one in particular. No one seems to be paying much attention.

One of the white people stares up at an ad near the top of the car.

“See, they won’t say anything! Oh, no. White people would rather die than be seen as rude.”

At this point, a young, fit man who is neither black nor Caucasian approaches the portly man. The young man is wearing black leather boots that run all the way up to his knees.

“Sir, why don’t you be quiet? You’re being rude. People are just trying to go home.”

“OHHH! I’m being rude? I’M being rude! Listen, you white people don’t have no cause to–”

At this point, our young Native American turns to the white man who is seated. “Sir, I’m sorry, most New Yorkers are not like this.”

At this point the black man points to the white man and says, “Look at him! That’s not even his own hair!”

And that was by far the most offensive thing directed at me.

At this point I felt it necessary to tell him that 1) Indeed, it is my hair (I may have invited him to muss it up, which wasn’t wise) and that 2) so far he was the only one on the train who had said anything racist.

“My people have a right to kill you,” he said.

At which point another black man in this corner of the subway car loudly declared, “How about them Cowboys?”

FSU’s Rashad Greene is an easy dude to like, and not just because he learned how to catch passes by watching Ethan Hawke in ‘Boyhood’

Alas, your loyal correspondent may not even be able to watch the game. He’ll be in a place that may not even have American network television (not sure yet). So please watch for me and if you don’t see any snarky tweets, you’ll know why. Enjoy.