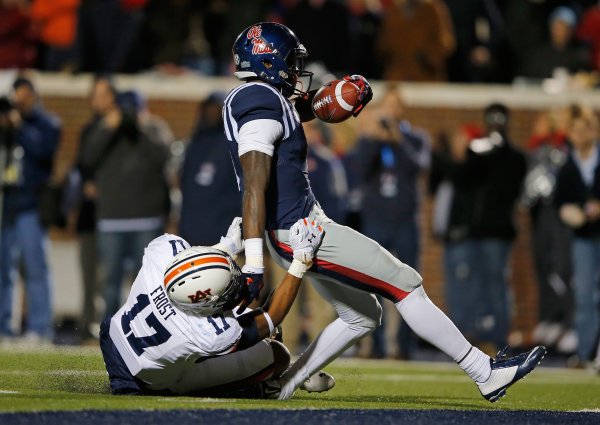 Because we are not overly intelligent, or sophisticated, we in the media (print AND television) tend to over-dramatized offensive plays that win games or championships. In Auburn’s case alone, we are still raving about last season’s 4th-down Hail Mary pass that beat Georgia and the Kick-Six that aggravated Nick Saban’s numerous ulcers.

And those were both dramatic, bordering-on-miraculous plays. But then, so was Auburn linebacker Kris Frost’s tackle of Mississippi’s Laquon Treadwell (48 catches, 5 TDs on season) last Saturday night in Oxford. In what may have been the most thrilling game of the season (or at least the most thrilling since Notre Dame visited Tallahassee), the No. 3 Rebels trailed the No. 4 Tigers 35-31 with 90 seconds left when Treadwell, who had already scored on a quick out pass, caught another from Bo Wallace near the 20. As Treadwell scooted toward what looked to be the go-ahead touchdown, Frost caught him from behind and pulled on Treadwell’s hips, just inches from the goal line.

Frost’s tackle, unfortunately, led to a a fracture of the Ole Miss’ star receiver’s left leg, which probably is what caused Treadwell to lose his grip on the ball just inches shy of paydirt, the lead, possible victory and a shot a the F-Cubed (Football Final Four). Although the refs initially ruled a TD (and this was nowhere near as egregious as Nick Chubb’s initial non-fumble in the WLOCP), it was overturned.

Here’s Frost’s play, in case you have yet to see it…

Gus Malzahn to SEC West: U can’t touch this…

What does SEC-city native Tom Petty say: “Oh, God, it’s painful/When something is so close/And still so far out of reach.”

Obviously, sorry to hear about the sophomore Treadwell’s injury (T&P, etc.). But when you consider the play that Frost made, and how it altered the trajectory of both team’s seasons, it deserves to lead off our day…

Thought No. 1: In no sport is “making a play” a bigger deal than football.

1) Florida holder Michael McNeely, a five-eight walk-on who was recently accepted to the University of Florida Medical School, scores on a (down field-holding aided) fake field goal in the first quarter. At the time the Gators trailed 7-0. That play altered the entire mood of the game –I love how McNeely lost a cleat after scoring and a cheerleader tossed it back to him–and my friend Dan Wolken tweeted something from the Ole Miss press box about how that play could swing the game in UF’s direction.

Dan was correct. Florida went up 31-7 before Georgia even remembered that it was supposedly the better team. About making plays, I’d add that three plays earlier the Gator holder snapped the ball over the head of QB Treon Harris. Georgia freshman DB Dominick Sanders had a clear shot at Harris 20 yards behind the line of scrimmage, but as DBs attempting QBs are won’t to do, went for the knockout when all he needed was the sure tackle. Instead of 2nd-and-32 or so, Gators had 2nd-and-22. Did it make a difference? We’ll never know. 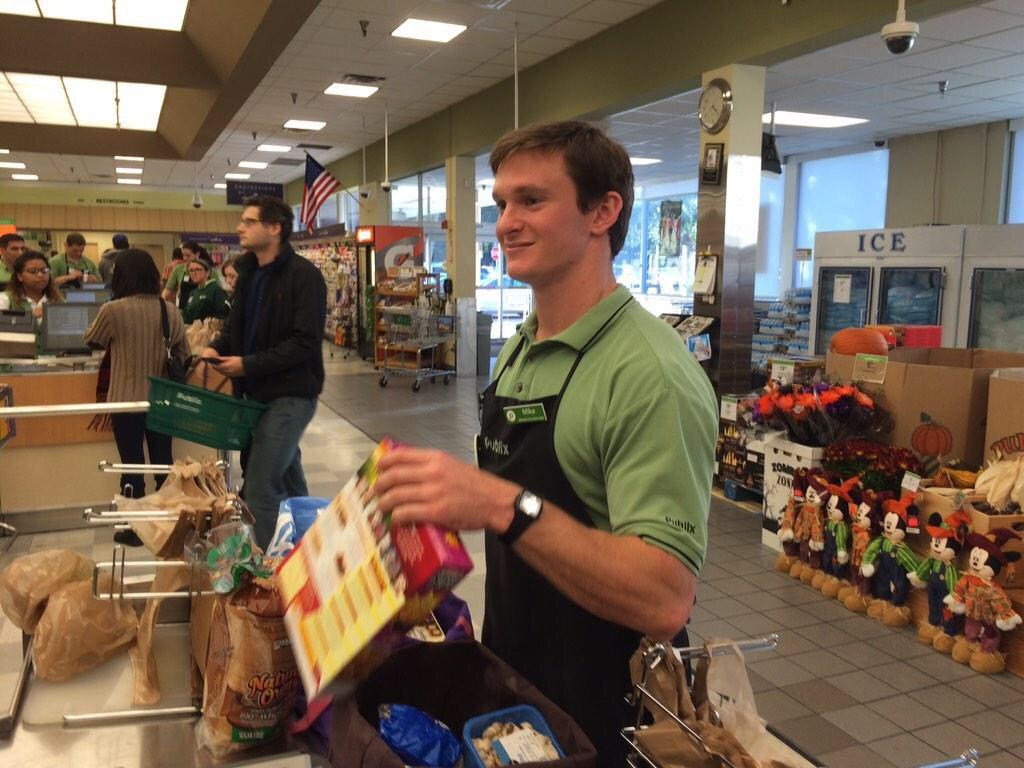 As a non-scholarship athlete, McNeely can work (at a Publix); somehow he still has time to do well enough academically to be accepted to med school; high standards…what a concept!

Gators, by the way, ran the ball 60 times and passed six. Navy threw more on Saturday versus Notre Dame. And yet Georgia did not abandon its base defense until late. Credit for this loss rests squarely on Mark Richt. And why Todd Gurley, in the wake of the Marcus Lattimore news, would return to play for a Bulldog team that isn’t going to the F-Cubed (Football Final Four), is beyond me.

p.s. McNeely works at a Publix. Clip-and-save for when the Gators play the Seminoles.

P.S. No. 2: Has a single play ever done more to potentially alter the trajectory of a coach’s career? I’m sure the answer to that is “yes,” but nothing comes to mind at the moment for me.

Okay, I had more thoughts but I have to get on with my day. Maybe more tomorrow…

It was a week that began with the Royals on FOX and ended with Prince on Saturday Night Live. The Purple One performed an SNL-record eight-minute long medley of tunes.

Much, MUCH more worth mentioning about the show was host Chris Rock’s monologue. Because you can’t watch it without having an opinion about it.

1) I LOVE Chris Rock. LOVE him. Because he’s fearless and honest. So you need to know that going in…

2) Content aside, this wasn’t as polished as he usually is. It felt a little like he needed to rehearse this another day or two.

3) Those first two points are minor. The major takeaway is that Rock chose to discuss highly touchy subjects as the bases for humor: The Boston Marathon bombings, the Freedom Tower and 9/11, the over-commercialization of Christmas, and gun control. You may as well be trying to score off Madison Bumgarner.

4) The Boston Marathon jokes fell flat –we all knew where he was going–but the Freedom Tower stuff, to this New Yorker, was hilarious, because it’s what everyone who lives here is thinking: “The Freedom Tower? They might as well call it the ‘Never Going In There Tower’ cuz I am never going in there. There is NO circumstance that will ever get me in that building. Are you kidding me? Does this building duck?…In the SAME spot? They put another skyscraper in the same spot? What kind of arrogant Floyd Mayweather crap is this?… Hey, I got robbed on the corner of 48th and Eighth about 20 years ago…I’ve never been back.”

Perfect. And it’s what every New Yorker I know is thinking. As a hundred or so Conde Nast employees prepare to head into their first day of work at the Freedom Tower today, I bet they have all shared this video among each other.

5) The Over-Commercialization of Christmas point can never be overstated: We celebrate the birth of the least material man in Western history with the most over-commercialized day/season of the year. Not in the face, says Jesus. Again, perfect. He probably could’ve gone deeper and funnier on this, but it’s all true. And I’ll use this bit to rationalize another year of me under-performing as a Yuletide shopper.

6) The gun bit. Again, from where I stand, hilarious and true. Common sense, with the 2nd Amendment nuts, is not in play. You’re not a nut if you believe in the 2nd Amendment. You’re a nut if you fail to appreciate that in 1787 the framers probably had no idea that there’d be guns that could fire 4,000 rounds per minute. Anyway, it was a great closing line, “From now on, the only time you’ll ever hear me mention a disease is if I have it.”

UPDATE: My never-met-in-person friend Joanna S. notes that the Boston Marathon and Freedom Tower jokes may all have just been a set-up for the larger joke, which is, We’ll commercialize anything in America, because that’s the nature of America: making money. “The $9.11 Red Lobster special.”

4) The Metastasis of Tom Rinaldi I honestly don’t know Tom Rinaldi. Have never met him. But, to me, he’s doing to cancer what malls have done to Christmas.

Cancer is bad. Got it. I think we all knew that.

This week Rinaldi produced not one but two Bart’s People-style features on college athletes dealing with cancer. The first was on Auburn’s spectacular wideout Sammie Coates, who has befriended a leukemia patient. The second was on Mount St. Joseph women’s hoopster Lauren Hill, who has inoperable brain cancer but was able to play in one college game before she must deal with a truly awful fate.

Standing alone, every story Rinaldi has done is worthwhile. But when all you ever seem to do are cancer stories, it begins to feel like pandering. Like you’re trying to manipulate us with the go-to tearjerker. It’s like I’m imagining Rinaldi sitting in a room and wondering if Brittany Maynard ever played a college sport.

You could, at this stage, create an entire web site of Tom Rinaldi cancer-centric features. It’s past the point of parody.

Let’s hear from the jack-o-lantern…

I’m a Bill Maher fan, not because I necessarily agree with his views, because I believe that he really believes in finding the truth and arguing the issues. He’s not perfect –if he were, we’d have an over-commercialized holiday in his name–but I think that most of the time he just wants to find the truth.

Anyway, this was from last Friday night. Here’s Maher talking about his proposed commencement speech at Cal-Berkeley in December and the online petition to prevent him from speaking. And here’s attractive panelist Rula Jabreal (“She’s quite a Muslim”) disagreeing with him. What I enjoy about this most is the saintly patience Maher displays as she continues to drone on (bad use of verb, perhaps) even though he has repeatedly, and politely, told her that they have to move on. This may be because Maher is such a terrific host –but if I’m being honest, it’s probably because she’s hot and Maher loves the hot panelists.

Tell me if you disagree, but what’s funny to me is Rula doesn’t listen to what anyone says. She speaks over everyone. She’s completely implacable. She’s reinforcing the worst views of radical Islam. Maher: “In your world, either I say exactly what you want or I’m a bigot.” While much of this 2006 James Bond remake starring Daniel Craig felt like self-parody to me –either that or the first-ever Norman Chad-free telecast of the World Series of Poker–it is still terrific and cruel. Craig may be the best Bond since Sean Connery. Amazing, since he really did not stand out in Munich a few years earlier.