“Orrange who?” “Orrange you glad I buried this trey?”

Amber Orrange, Cardinal. That’s a colorful name, no? Last night the Stanford senior found herself ridiculously wide open with less than two seconds remaining in regulation and Stanford down three. Her teammate, double-teamed, found her, and Orrange buried the trey to force overtime.

Stanford had trailed by 10 late in the second half. In OT the Cardinal trailed by 5 but recovered to win, 88-86. Too many defensive lapses by the Huskies, who just never could put the Cardinal away, though they had plenty of chances.

So what? So, Stanford ends UConn’s 47-game winning streak. A few years back on this same Maples Pavilion court, the Cardinal ended the Huskies’ record 90-game win streak. Tree-mendous.

Listen, I’m willing to believe that brain-eating zombies have infiltrated Georgia (and I’m not even talking about the show) or that Carol and Daryl never worked at an inn in Vermont run by Bob Newhart, but when you put those two characters in full Thelma & Louise mode in a van that is precipitously hanging over an overpass, and then send them over with nary a scrape, well, can I please return to Arthur Fonzarelli on water skis?

We’re asked to believe that a white van does a perfect 360 front flip and that the two characters–strong as they may be–walk away only with scratches? C’mon. In fact, as this terrific story illustrates–with actual video evidence– the van landed upside down, which would have made C&D zombie gorp.

On the other hand, Walking Dead has now beaten Al Michaels (Seated Dead) and Cris Collinsworth three weeks in a row now in the 18-49 age group. So maybe next week we’ll have a Butch & Sundance-style leap off a cliff…

3. The Return of the Holderness Family

We like the Holderness family of North Carolina. Handsome dad Penn, beautiful mom Kim, matching daughter and son. They’re like the family Mad Men pitches were built around. Anyway, last year they went viral with “Christmas Jammies,” so why are any of us surprised that they’ve returned for a Thanksgiving song that parodies the biggest pop hit (sorry, Taylor) of the past two months?

And how could we leave you without adding “Baby Got Class?” 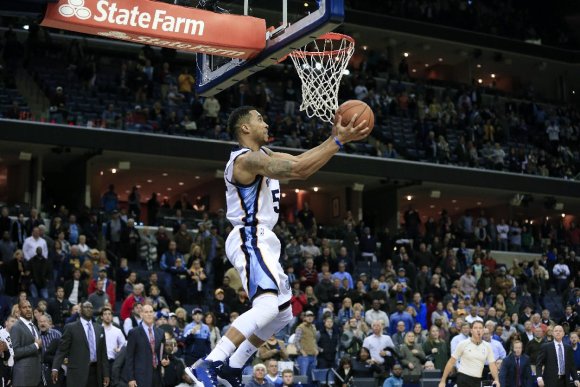 Courtney Lee’s alley oop with 0.04 left is being disputed.

It’s not that bizarre to see a basketball team based in Memphis open the season 10-1. It’s just odd to see one do so that is not coached by John Calipari or Josh Pastner. The Grizzlies moved to a league-best 10-1 by trouncing one of the other top teams in this nascent season, Houston, 119-93. This is what happens when you keep a solid nucleus (Marc Gasol, Z-Bo and Mike Conley) around for a few years and none of them are named Carmelo.

Of course, Memphis could wind up going back to 9-2 if Sacramento’s appeal of their win last week is upheld. But if I’m Sacramento, I squandered a 27-point lead. It should never even have come to that.

In last night’s win, seven Grizzlies scored in double figures but none had 20. As a coach, I want that every night. Much healthier or a team than Kobe’ing.

Granny will not be playing for the remainder of the season, either

So Roger Goodell suspends former NFL MVP Adrian Peterson for the remainder of the season without pay (Do you hear that, Peter King? WithOUT pay) telling him that he has shown “no remorse” for the switch-beating of his son.

I’m no huge fan of RG (RG IV?), but here’s why in a Twitterverse he cannot win. If he does exactly what he did, the tweeps accuse him of a double standard as it reverts back to Ray Rice. But if Goodell does anything less, then the tweeps remind all how comically inept and insensitive the NFL is on domestic violence. Some classic films are like eating vegetables (Citizen Kane, anyone?). But not Casablanca. The gang at Rick’s Cafe are as entertaining, witty and sardonic as any you’ll find. The dialogue is fantastic, the plot is tense and tight, and the characters unforgettable. With the exception of one flashback, the entire story takes place over the course of two (or is it one?) nights. This is pure ultimate nachos. And when you remember that this film was released at the advent of World War II, it’s even more bold. Great love story, great thriller. You must remember this…

One thought on “IT’S ALL HARPOONING!”