Did the Selection Committee get it right? It all depends how you look at the picture:

–Ohio State, whom this writer predicted WOULD make the four-team playoff back on September 8, two days after it lost to Virginia Tech, is one of the four best teams when it feels like. I sincerely believe that, and 59-0 versus Wisconsin makes that point (shh, we’ll just forget those narrow home wins versus Indiana and Michigan last month). However…

–TCU has been very impressive all season long, perhaps even more so; was No. 3 in the SelCom rankings after last week and won by 52 on Saturday; and its only loss was due to a 4th-quarter hiccup in Waco that was abetted by one missed PI and one called PI (both of which were extremely questionable)…

–and Baylor beat TCU, which makes it the only team of the three with a W over a Top 6 opponent as well as it being the only one of the three whose loss came on the road (and to a better team, West Virginia, than the Va. Tech team that defeated Ohio State). So, yes, it’s exactly like an Escher print (and exactly unlike that Drake song). You start at the top but when you get to the bottom you’re back at the top. Disorienting.

I can’t fault the Selection Committee. Two schools were going to get hosed either way. Better to piss off one faction (Big 12) than two: a Big 12 school who’d have a legit gripe PLUS the B1G. Meanwhile, no one came off worse than the Big 12 by touting a “One True Champion” slogan all season long and then naming co-champions. Kids, please let this be a lesson to you: just because someone has a better title, better home and higher income than you do doesn’t mean they possess more common sense. In fact, they may be hindered by their politically-based decisions. Horrible move, Bob Bowlsby. Baylor beat TCU head to head, so “crown their ass.”

Best quote of the weekend comes from Baylor QB Bryce Petty on whether Baylor deserved to be in the four: “That’s above my pay grade. The only thing I’m not paid to do is play.”

p.s. If you REALLY want to know what I think, scroll through my tweets the last two days. Too many nuggets of thought to reproduce here. Thanks.

(SPOILER ALERT: If you haven’t seen this episode of The Newsroom and plan on doing so, eye-muff this item)

“You’re older than you think. Don’t learn that the hard way.” Solid advice.

1) How Aaron Sorkin and his writing staff completely fooled me with The Sixth Sense treatment for Will. I should’ve seen that coming. Did you? If you didn’t, as I didn’t, it makes you want to watch the entire episode again to pay closer attention to the character’s lines (and I should’ve realized they never touch and we never learn the other inmate’s name. Well done).

2) Sloan Sabbith’s takedown of the Gawker-ology of the world. I’m sure the very blogs that Sorkin excoriated will find a way to turn this screed on him, but she’s right/Sorkin’s right. I happened to be in the HBO audience the night in 2008 when Buzz Bissinger pulled out a can of whupass on Will Leitch and I recall so many people who are in my audience/sports realm thinking that Bissinger was the crank. I never did. He was spot-on. As Buzz told Will, “I gotta be honest with you, I think you’re full of shit…”

(By the way, I like that Sloan is no longer awkward this season. Best character jump in the series. She’s been the best part of Season 3, and it isn’t close.)

What time are the Falcons and the Packers on tonight, she wonders?

I always found it interesting that Will had already planned a parachute jump from Deadspin before that show aired, that he pretty much left Deadspin that week for New York mag and that now he himself works on the “respectable” side. I loved when Sloan told the blogger guy to “Name X,” name the income amount at which it becomes acceptable that celebrities no longer have a right to privacy. Great scene.

3) I’ll miss Charlie Skinner (I loved him; he reminds me of Weisman, one of the best people I ever met in TV sports) but there were plenty of hints this was coming. He’d been steadily allowing Lukas Pruitt to raise his blood pressure the previous two episodes, and then he’d decided to play ball with Lukas in order for everyone to save their jobs. As he blared in his final minutes, “IS THIS A MUTINY?” “No,” replied MacKenzie, “it’s an intervention.”

He got it, finally. And then it was all over.

4) How bizarre that Don’s visit to Princeton and the rape accuser airs the same week of the Jameis hearing and the Rolling Stone/Virginia coed fiasco. Wow, this is going to cost Jann Wenner LOTS of $$$$.

Anyway, a few East Coast Elite media critics, such as Emily Nussbaum (does not work with her hands…well, except when she’s typing) of The New Yorker, fell over themselves attacking last night’s show because they didn’t like what Aaron Sorkin had Don saying in the Princeton dorm room. Because, in their opinions, the show was no longer about art but it had to become a PSA on rape.

Honest question: Isn’t it possible that no one is lying? Don’t you think the writers intentionally introduced the idea of a college student doing tequila, mollies, coke and mushrooms (AJ, are you reading this?!?) to demonstrate that this was NOT, despite she told Don, the easiest rape arrest of all time? It’s not that the dude isn’t sketchy or that she isn’t, as she sits in her room, credible. It’s this: Who knows what her mental state was at the time of the incident? Does she?

To propose that question doesn’t make rape any less heinous or serious. It’s simply to make the point that Don understands this isn’t as simple as she thinks it is. And that this will make great TV but horrible jurisprudence.

This item is a leftover from last week, but the in-arena blimp at Portland’s  Moda Center (really? The Moda Center?!? How are we supposed to keep up?Thank God the Romans just always called it the Colosseum) crashed into the seats during last Thursday night’s game between the Indiana Pacers and the Portland Trail Blazers. The Blazers won, I think… 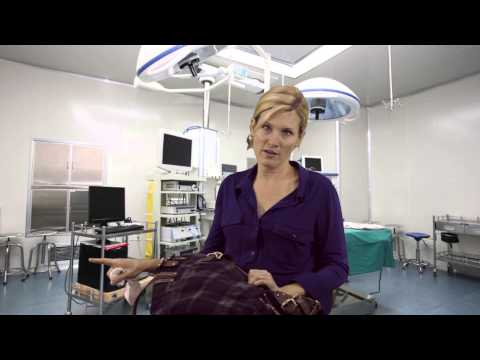 I have no idea what Katie is doing here, but my guess is that the patient is now wearing a toe tag.

If, like me, you’ve been missing the fabulously talented Katie McCollow on this site every Wednesday, well, I wish I had better news. Apparently, Katie is a TV star now (that dame is TOO talented) and she’s promoting All Whites Egg Whites through non-lethal means. See if you can spot which person she is in the ad (hint: she’s not stepping on a scale). Also, if you happen to see an ad for Burnsville Dodge, (“We are the KING of RAM!”)that voice may be familiar. Go, Katie, go!

At the Midwest FurFest Convention in Chicago, attendees were forced out of their hotel overnight due to a gas leak, which authorities say was intentional. Which is hilarious, since hundreds of costumed humans were then forced out into the street. I don’t know if this makes more or less sense than watching an anaconda eat a man on TV (Was he unaware that anacondas usually suffocate prey before killing it?), but I did enjoy catching Morning Joe early this morning as the host explained to Mika what Furry is all about…

An Affair To Remember

For God’s sake, Deb, look BOTH ways before crossing 34th Street. Any rube knows that.

Stop everything! The paragon of all RomComs, the one every other RomCom aspires to be. I can do without the third act, to be honest, but I do believe that the opening scene in which Deborah Kerr first meets Cary Grant is the best example of flirtatious banter onscreen I’ve ever come across. At least catch that.