Macur writes: “Anyone who has supported the program the past couple of years should feel dirty by now.”

The New York Times publishes a scathing story/commentary by Juliet Macur on Florida State chasing glory down a rabbit hole. Did someone tell Macur that the Seminoles just gave head coach Jimbo Fisher an eight-year extension?

Meanwhile, Sports Illustrated plays “One of These Things Is Not Like The Other” with its four regional College Football Playoff covers….

First, there was Ferguson. Then Eric Garner. Then two police in Brooklyn are shot execution-style. Then protesters close down 5th Avenue on a pretty vital shopping day. Now a man allegedly points a gun at a cop in Berkeley (the town adjacent to Ferguson) and is fatally shot by the officer. Thank God we have Rush Limbaugh and Al Sharpton to make sense of it all for us. Laker legend Kobe Bryant has missed more shots (380) than anyone in the NBA this season, but last night he missed his first game. Coach Byron Scott sat him to give the 19-year vet some rest.

Of course the LOLakers went out and easily dispatched of the league’s best team, the Golden State Warriors Come Out and Play-Ay! L.A. led by 22 after three quarters and had seven players in double figures, with 28 assists.

It’s Bill Simmons’ Ewing Theory come to life (again). The Ewing Theory, by the way, does not translate to other sports. But in a game where teamwork and passing is emphasized on offense, it manifests itself often.

By the way, even former Laker Vlade Divac outscored Kobe last night, sinking a half-court shot for charity to earn someone $90,000. Of course, Kobe earned nearly three times more than that last night ($286,585) while sitting.

4. Art Imitates Life Down Under

At some point someone will just smile and hand someone else a vegemite sandwich.

Australia, the country that recently brought us eight children murdered in one home (and the mother of seven of them, via five different fathers, is the prime suspect), also is providing the best horror film of the year. Or so we’ve heard. It’s called The Babadook and it revolves around a mom, her seven year-old son, a scary children’s book, and the husband/father who was killed while driving the mother to the hospital to deliver said son. Guilt, resentment, frustration, madness. Rotten Tomatoes gives it a 98%.* Only Boyhood received a higher rating.

It might’ve received a 99% if they’d given Yvonne Strahovski a minor role.

As Deadspin aptly put it, “86 players not named Odell Beckham, Jr., made the Pro Bowl.” The rosters for the annual game that no one wants to play in were released yesterday and the New York Giant rookie, who made the Catch of the Year and, oh, by the  way, had 79 catches, 11 TDs and more than 1,100 yards. Surely, he’ll make the Rookie/Sophomores Game.

You know who may have a more legitimate gripe? Golden Tate, Warrior, who finished fourth in the NFL in catches with 96. Haters will counter that this is a perk of lining up opposite Megatron. They’re right, but you still gotta catch the ball. 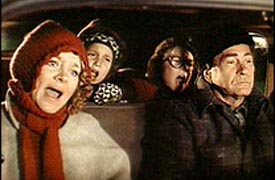 I never knew this. The film’s director, Bob Clark, also made Porky’s and Porky’s 2: The Next Day. I think we could all see the potential there, no? Underrated aspect of this brilliant, charming 1983 film: Darren McGavin’s performance. The same decade gave us this and The Princess Bride. What have you done for kids lately (that isn’t animated), Hollywood?