*The judges will NOT accept “Doogie WOWser!”

The opening number, which was also Anna Kendrick’s best on-stage musical moment since the Bellas’ finale at the ICCAs; “the best and the whitest;” the line about each Oscar nominee receiving a gift bag worth $160,000 in items, including “an armored car for when the revolution begins;” “the most well-adjusted former child star here tonight;” the tight-whitey callback to Birdman; the Travolta jab (and the way in which Menzel and Travolta handled it) and the line about Benedict Cumberbatch; “it takes a lot of balls to wear a dress like that”; the Annie joke; “Edward Snowden could not be here, for some treason.”

Not only did Neil Patrick Harris own the Oscars, but he dared to make an opening monologue joke in which he pointed to opposite sides of the audience and referenced Oprah and survived (was that a subtle nod and/or tribute to David Letterman?)

My lone quibble is that when he introduced a certain singer, he did not say, “John Legen—wait for it–d.”

NPH more than owned last night’s telecast; he saved it from more bloated self-importance than usual. “Glory” might or might not have been the best song, but how is it not about to win when you reconstruct the Edmund Pettus Bridge onstage (loved Common’s acceptance speech, though); and both Best Actor (ALS) and Best Actress (Alzheimer’s) only validated Robert Downey, Jr.’s “Never go full retard” advice. We got scolded about fair wages for women (I wonder if Ellen got paid the same to host last year as NPH did this year), about racism, about gay rights, about how “we need to talk about suicide out loud” and even about corrupt Mexican governments….

Anyway, even if most of the nominated films were tributes to pretentiousness, it was a terrific telecast. Well done, Barney. 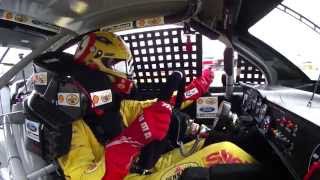 I ordered the No. 5 with a fruit cup instead of fries

Middletown, Conn., native Joey Logano becomes the first man born in 1990 or later to win the Daytona 500. Logano is also the first man whose surname ends in a pronounceable vowel to win the race since its 1959 debut. The race, like Logano’s name, also ends in a pronounceable vowel. Three previous winners have had silent “-e’s” at the end of their names, but those are not as cool. Michael’s mom stays in the picture

Olympic swimmer Michael Phelps, he of the 18 gold medals, two silvers and two bronzes, gets engaged to Nicole Johnson, she of the 2010 Miss California sash. Not to be confused with monster truck driver Nicole Johnson, who at 41 is 12 years older than the decorated couple but is no slouch herself.

The “other” Nicole Johnson

Phelps, 29, is the most decorated Olympian of all time and has opted to train for the 2016 Olympics in Brazil, during which he may wonder why he chose to remain single.

Who is Jameis Winston?

Is the 2013 Heisman Trophy winner a better choice at quarterback than Marcus Mariota, his successor in that trophy case, or is he the latest incarnation of JaMarcus Russell (or was that Johnny Manziel)?

Winston is a highly accurate thrower and a terrific decision-maker…when focused. Scouts should watch both halves of last October’s Notre Dame-FSU game in order to witness Bad Jameis/Super Jameis (I am doubtful that 2013 Pitt Jameis still exists).

My main problem with Jameis is related to his 4.99 run at the NFL Combine, and that is this: He already has the physique and the mobility of Fred Sanford. He’s prematurely old, from a healthy body standpoint. Whereas Mariota looks like a young leopard out there. Does it matter? We’ll see.

QBs selected among the first five overall picks since Russell was taken No. 1 overall by the Oakland Raiders in 2007:

Brit Mo Farah broke the seven year-old record for the indoor 2-mile, breaking the tape at the Birmingham (England) Grand Prix in 8:03:40. The previous world record, by Kenenisa Bekele, had been 8:04:35. I’m right there with them…well, if that were the world record for one mile.

Farah, 31, is originally from Mogadishu, Somalia, but his father is a native-born London citizen. He is the current Olympic champion in both the 5,000 and 10,000 meters, so if he enters your local 5-K, best you can hope for is second place.

Having lived out west and in New York City, Woody Allen’s Best Picture, a tour de force of a screenplay, so hits home. I live near the corner where Alvy Singer says his final goodbye to Annie (63rd & 9th Ave/Columbus). So many classic lines and moments: “I can walk to the curb from here,” and “I forgot my mantra” and “I’m due back on planet Earth.” If you’ve never seen this and want to bask in a writer who has completely discovered his muse, watch this movie. There’s not a phony moment in it.