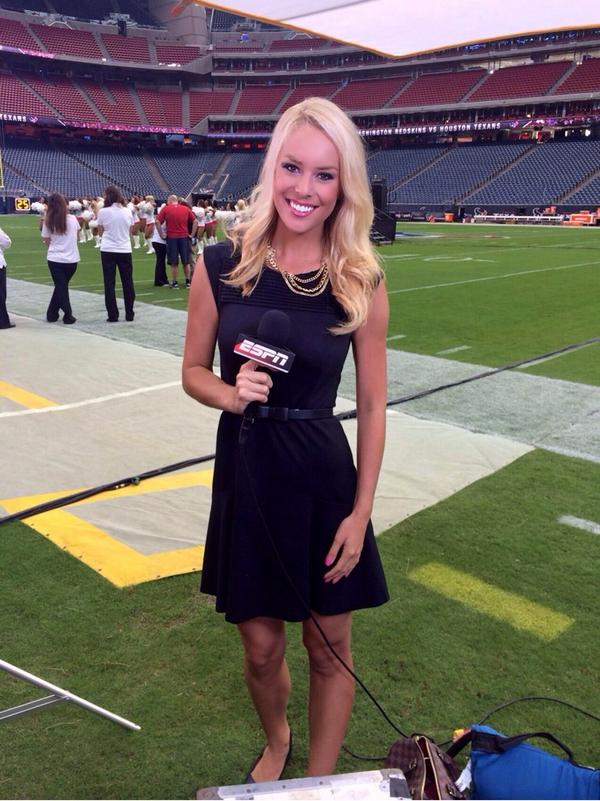 “Laura Rutledge, come on down! You’re the next contestant on ‘The Sideline is Right’ “

1. When the Britt Hits the Fan

As I tweeted earlier, it’s kind of ironic that Britt McHenry was interviewing hockey players,  many of who never attended college and are missing their front teeth, this week.

So I’m going to assume that McHenry won’t be putting this on her demo reel?

Some folks tweeted that she in no way deserves to be fired, that you can’t can someone just because they say awful things. Maybe not, but she’s not Ken from Accounting. McHenry is a television personality. Part of her job is having the audience like her. And now the audience has seen that behind that pretty face was an ugly person. At least in that moment.

A one-week suspension isn’t long enough. It would be better for her if they suspended her for a month. Hell, Ballghazi went away. Why not this?

Granted, it’s a long season and if Anthony Davis misses this shot, who knows what unfolds afterward in a different fashion for both teams? Still, the Pelicans beat the Thunder out for the 8th spot in the West despite having the same record (45-37), meaning they won the tiebreaker. So what happens if Davis doesn’t hit this crazy buzzer-beater?

And, yes, the score was tied at the time. So they’d have gone to overtime. Davis on the night: 41 points, 10 boards.*

*Read comment below by our friend Okerland for a great Paul Harvey nugget on this….

…love rookie Kris Bryant. In fact, all scouts do. Today the Cubbies called up the rookie phenom slugger from Las Vegas.

Last season in the minors, Bryant his .325 with 43 home runs. This spring in the Cactus League, the six-foot-five, 23 year-old batted .425 with nine home runs. The Cubbies kept him in minor league ball the minimum 12 days, which means they’ll get to have hime an extra season before he may file for free agency. Don’t think Scott Boras will forget that.

Still, the drought is at 107 years. Money aside (if that’s possible), what player wouldn’t want to be a part of the history of bringing the North Side a World Series title?

Model Giselle Bundchen, the Olivia Munn of the AFC, makes her last strut up and down the catwalk yesterday at the Sao Paolo Fashion Show. Bundchen, 34, is a mother of two. Bundchen, who is Brazilian except that she’s really German, has been walking runways at fashion shows since age 14.

This is the world’s last male northern white rhino, now under 24 hour guard. Notice the one soldier stroking it as if to caress. There are a few female white rhinos. Let’s pray for a comeback.

If I had the money, I’d build ranches for endangered animals. All things wise and wonderful/All creatures great and small/All things bright and beautiful/The Lord God made them all.*

*Even if you’re an atheist, you get the gist.

The Turtles, a No. 1 Billboard hit, 1967. This song knocked the Beatles’ Penny Lane from No. 1, spent three weeks there, then got bumped by Frank and Nancy Sinatra. Those were the days, kids. Kawhi: I guess I’ll just have to DVR Veep

So Adam Silver puts the first game of the most intriguing first-round playoff series directly up against Mad Men and Veep/Last Week Tonight? This is NOT cool. Not cool. Gonna be quite a testy series.