Smart enough not to grow a mustache.

Allow me to take up the defense of Don Draper. When Johnny Mathis tells him, “You don’t have any character; you’re just handsome,” I thought, Well, he’s half-right. Don has his flaws –one very serious one– but time and again in this episode he’s doing the right thing. He’s actually very zen.

As my TV-viewing host and friend, Chris C (THANKS!). noted,  it was the Beautiful People episode of Mad Men. Lots of Don, Joan and Betty. Also, wondering if Matt Weiner will really kill off his son in Vietnam. We’ll likely never learn.

Great close last night. “Now we just have to find a place for you,” Don hears as the camera fades out and he stands in the hallway looking into his empty future.

Attended the International Championships of Collegiate A Cappella (ICCAs) at the Beacon Theater on Saturday. The winners, for the fourth time: the SoCal Vocals from USC –although a shout-out to Baylor’s VirtuOSO troop, whose rendition of Uptown Funk was the night’s biggest crowd-pleaser.

The SoCal Vocals shrewdly showcased a beautiful, vibrant brunette female vocalist whose name I believe is Nikki Segal. She had a terrific voice and an even more captivating stage presence. Bigger things ahead for this one. Everyone favorite (or least favorite) Wall Street pundit, the perpetually frenetic Jim Cramer, gets married (even though some of his buddies reportedly warned, “Don’t buy! Don’t buy!”). Cramer, 60, wed 49 year-old Lisa Detwiler, 49, of the Corcoran Group, a real-estate firm. It is the second marriage for both, so they’re diversifying. 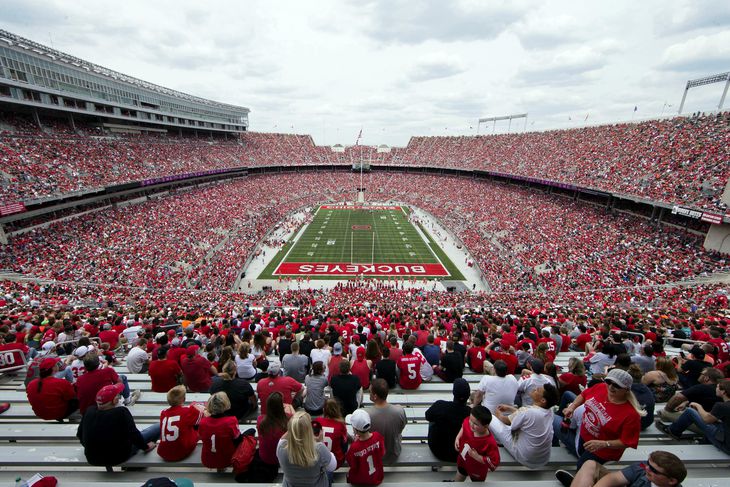 Nearly 100,000 braved idyllic April weather in Columbus on Saturday afternoon to watch defending national college football champion Ohio State face…Ohio State. The Scarlet & Gray Spring Game. Announced attendance inside Ohio Stadium, alias The ‘shoe: 99,391 at $5 per person (mostly). That’s a school record. And that was with Braxton Miller, Ezekiel Elliott and others not even suiting up.

There’s nothing the hell to do in Ohio.

A typical refugee vessel. There is no Lido deck. The all-night buffet is you.

An estimated 700 Libyan migrants drown in the Mediterranean when their ship capsizes. Not to be confused with the 12 Christians who were thrown overboard and drowned last week by their fellow fleeing Muslim passengers. We have a lot less to complain about than most of the world (not that it stops us from doing so).

Hands Across the Sea

There were more successful New Wave bands than Modern English, but there was no one who was both Newer and Wavier: their look, their sound, their band name and their big hit (Melt With You, the signature song of the era) all embodied the period. You may think of them as a one-hit wonder, but I always thought this tune, which feels a littl Thompson Twins-ish, deserved more love. A much-belated shout-out to the acoustic guitarist I came across in Jacksonville in 1995 playing this tune at a beach bar. I haven’t forgotten, dude.

Curry & Kerr. Is there a Currier? A Kerriest?