The Magna Carta turns 800 years old today. It’s not so important what card you get it for its birthday, it’s just real important that you sign it. If you are keeping score, Magna Carta Holy Grail turns 2 on July 4. 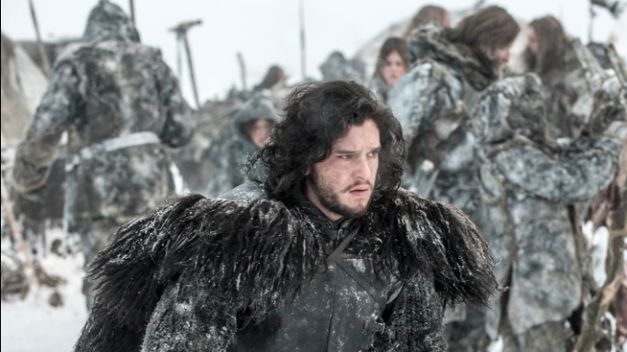 “I’m glad the end of the world’s working out well for somebody,” he told Samwell. Yes, but not for you, Jon Snow.

The judges will also accept “Et Tu, Olly?”, “Arya Kidding Me?” “Keeping Up With the Sands”, “That Dragon is Draggin’.”

Revenge, served colder than the average temperature of Hardhome, was the main dish on the Season 5 finale of Game of Thrones.

Arya avenged the death of Silvio (from Season 1).

The Sands avenged the death of Oberyn Martell.

Alliser, Olly, and other members of the Night’s Watch avenged all the slights, real or imagined, that they feel took place because of Lord Jon Snow. Meanwhile, a show that has long been known for being brutal to young women may have had its cruelest episode yet: Arya is inflicted with blindness; the Lannister daughter is fatally poisoned just as she is beginning to look as if she has a future in runway modeling; Sansa may have Butch & Sundance’d to her death off the walls of Winterfell — or maybe the snow, small “s”, broke her fall; Daenerys can’t get her dragon to start and is captured by the Dothraki; Stannis’ wife hangs herself; and Cersei — gasp! — has to endure a haircut without a glass of wine (honestly, that Walk of Shame would’ve been so much more glorious if she’d been toting a pair of stiletto’s and a Starbucks coffee. LeBron went for 40, 14 and 11, but even Drew Carey had a better supporting cast.

After three close games to begin the NBA Finals, the Cavs lose their second in a row by at least 13 points. The Warriors went small, which behooves them, and then so did the Cavs, who are not as well-hooved when they do so.

Timofey Mozgov has been Cleveland’s second-best player. He scored 28 in Game 4. He got 9 minutes of play and scored 0 points in Game 5. You take him out for J.R. Smith, but J.R. Smith plays every game as if it’s a Tuesday night in November in Milwaukee. He just never amps up his game.

I don’t know what Cleveland’s answer should be. I hear Michael Jordan is feeling frisky again. Sign MJ for Game 6?

These Ducks don’t waddle. Cheserek broke the tape but Oregon finished 1-2-3 in the 5,000 and won the team outdoor championship.

At a school that gave the track world both Steve Prefontaine and the Nike brand, Cheserek is neck and neck in terms of legacy.

An epic set by Grohl and the FF

I’m a big Dave Grohl fan even if I think Foo Fighters are no more than a solid B+ band. Anyway, who cares what you think, JW? On Saturday night the Fighters of Foo were playing a gig in Goteborg, Sweden when the former Nirvana drummer tripped and fell offstage and broke his leg.

No one could have handled it any better, though. Grohl spoke to the crowd, promised him that he’d return and that the band would finish the set (this is the man who promised, “I’ll stick around…I’ll stick around” after all) after he visited the hospital, and then did exactly that, playing from a chair.

“To the sounds of old T. Rex….” thank you, Roger Daltrey.

Last week’s love for an intelligent, lovingly made film (Love & Mercy) gets trounced in cold-blooded fashion by the oversized reptiles of Jurassic World. The sequel had a prehistoric opening weekend at the box office ($511.8 million globally, only $2.8 million shy of The Avengers).

Bryce Dallas Howard, whose dad used to go fishing with Sheriff Andy Taylor, is on to bigger creatures (and I don’t just mean Chris Pratt)

Opie Cunningham’s daughter did okay for herself on this gig.

Hate on Journey all you want — I did when I was in high school and the band was at its zenith — but they were a hit machine that created a bunch of “Turn it up” while driving in your car hits. This is one of them. The video is worth watching just for all of Steve Perry’s catastrophic hair and costume choices. A world-class voice in some serious need of fashion and dance move advice.