1. Night of the Iguodala

A man who did not start during the regular season, Andre Iguodala, scores 25 points in Golden State’s Game 6 clincher and somehow 7 of the 11 Finals MVP voters are moved to bequeath the award to him, never mind that LeBron James became the first dude ever to lead both teams in points, rebounds and assists in an NBA Finals. Stephen Curry, the league MVP who was outstanding throughout, including 37 points in Game 5, garnered zero votes.

And I’ll note that before Game 6 ESPN.com ran a story whose hed was “LeBron May Go Down as the Greatest Loser Ever.”

But the big story (supposedly) is that Golden State wins its first NBA championship in 40 years and so now they’re off to visit Trump Tower for the presidential congratulations.

More on this from our Maryland-based correspondent later, I’m sure….

2. Lady and The Trump 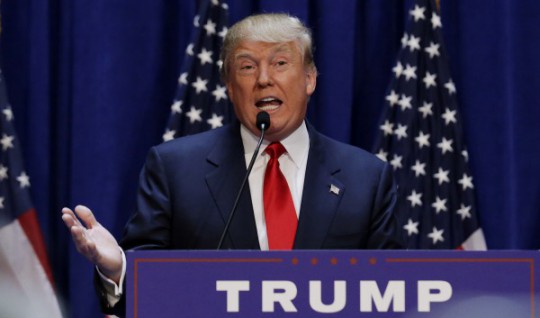 “When did we ever beat Japan… at anything?”

Well, I’ve got World War II and Apple computers, but go on….

The jokes are easy, but don’t laugh off Donald “I’m really rich” Trump, who declared his presidential candidacy yesterday, so quickly. Unlike his other 11 or so GOP candidates, the Donald has charisma. And he’s long been comfortable in front of a camera.

Sure, it’s funny to hear Trump say that he’ll be the best jobs president ever after having said, “You’re fired” more than anyone in the history of television. But he’s a combative, irrepressibly arrogant and candid breath of fresh air in the race. A blowhard, sure. But a breath of fresh air.

The big questions: Will he still be allowed to own the Miss USA pageant and would he re-decorate the exterior of the White House in all gold and glass?

I see Taran Killam playing Donald next fall. SNL’s writers got the greatest gift of all.

Hackman played for the Cardinals from 1999-2003. What more evidence do you need?

The FBI, the same organization that brought you Sepp Blatter’s head on a platter, now is investigating the St. Louis Cardinals for allegedly hacking the computers of the Houston Lastros. This is like sending spies to infiltrate the government of Andorra, but whatever….

The Cards currently have baseball’s best record (43-21) and have been to four World Series in the past 11 Octobers.

4. Howl at the Screen If Alan had his “one-man wolfpack” in The Hangover, well, the Angulo kids were a seven-man wolfpack in lower Manhattan. The Wolfpack is the TRUE story of an immigrant family, the Angulos, who home-schooled their six sons and one daughter and pretty much confined them full-time to their four-bedroom apartment. The children learned about life by watching movies and then reenacting them.

I agree, this is an amazing story: An immigrant family affording a four-bedroom apartment in Manhattan!?!

Anyway, the film won the Documentary Grand Jury Prize at Sundance and is now playing in cool cities where people spend nearly double the price of a monthly Netflix subscription to see a single film in a theater.

That’s 6’5″ Aussie Owen Wright, moments after scoring a perfect 20 on a wave at the Fiji Pro. It’s only the seventh time a perfect 20 score has ever been accomplished in the World Surf League. You can watch his ride here….

Before scoring the title theme for The Simpsons and most of friend Tim Burton’s films, Danny Elfman was the lead singer of a New Wave punk band named Oingo Boingo. This song was released in 1982 or ’83 in what was the height of the New Wave era.

You’ve just had four straight nights of NBA and/or NHL finals. Go outside and look at the stars. Or vote for a Kansas City Royal.