The International Mathematical Olympiad was staged last week — you probably watched in on NBC — and for the first time in 21 years, the USA won.  (Thanks a lot, Obama).

*Also note: no girls on the team.

Congratulations to Shyam Narayanan, David Stoner, Ryan Alweiss, Michael Kural, and the Liu tandem, Yang and Allen. Also, to coach Po-Shen Loh, who would have been a great name for a 70’s soul outfit. Your MIT acceptance letters are in the mail, gentleman. Now you may go back to hacking the server.

This will be the most popular topic of conversation at your local Cracker Barrel or Stuckey’s (Do they still have Stuckey’s?) this morning.

Blake Shelton and Miranda Lambert are getting a divorce. Those pained smooches at Country Music Awards shows were getting more and more uncomfortable to watch. And I’m not even talking about their manufactured affection. I’m talking about he’s 6’5″ and she’s 5’4″.

Sources tell MH that he’ll get Christina Aguilera in the settlement and she’ll get Adam Levine. 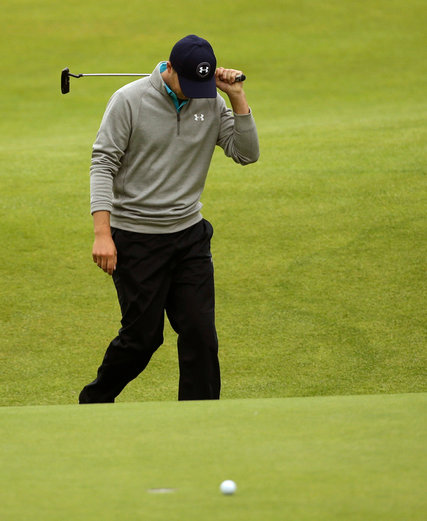 Ty Webb would have buried that putt, but he only measures himself against other golfers by height, so what would it matter?

Here’s what I noticed: Jordan Spieth had a quite sinkable putt, especially for a dude who has already won two majors this year, on 17. But he got a case of the yips and missed it.

One hole later is playing partner, Jason Day, had a more difficult putt. Day’s day was done, he knew that the best he could finish was third. So, with no pressure on him, Day sank the harder putt. That’s golf.

Some people think Spieth’s four-putt double bogey on the 8th hole yesterday cost him The Open and a shot at a grand slam. I say it was his Under Armour fleece. Who wears a fleece during a sporting event? You know who? NOT the Green Bay Packers!

Zach Johnson won the British Open. Nobody’s happy about it. We’ve all been there. You walk into a garage, not necessarily your own, and you spot a 20-pound bag of dry dog food. So, of course, you eat all of it. And it’s hot outside. And humid. So you need a nap. And then someone snaps an embarrassing photo of you and writes a story about it that goes viral (and why do they need to mention your color, i.e. “black bear?” Haven’t we gotten past that in America?) while someone else coins the term, “Florida Bear.”

It was a humbling experience for all of us,” championship game MVP Jonathan Simmons told NBATV of playing for Hammon. “I really love her, and I’ve only known her a couple days. She’s a real cool coach. She’s a player coach. That’s something we all like.”

Even when he is breaking barriers, Gregg Popovich cannot be stopped. Well done, SAS.

When I saw U2 on Sunday night at MSG, they played this 1981 release as their second song. “This is a song we don’t play enough,” Bono announced, and I agree. They don’t look like this any more, but they still sound like this (highly underrated: The Edge’s backing vocals). If you have a chance. go see U2. Even better than the real thing.