Happy 54th birthday to the President… although, how do we KNOW it’s his 54th birthday? Has anyone seen a birth certificate? That’s the third cycle of Beltre’s career, tied for the most in Major League history.

Is hitting for the cycle an anomaly or an indicator of greatness? Some of the greatest hitters in the game’s lore never hit for the cycle, among them Ty Cobb, Babe Ruth, Hank Aaron, Barry Bonds, Pete Rose and Derek Jeter.

And yet a disproportionate number of men who have hit for the cycle are Hall of Famers. Between 1911 and 1960, by my count, 48 of the 95 cycles were hit by future Hall of Famers. In one glorious stretch in 1937, the two men who hit cycles closest to one another were Lou Gehrig and Joe DiMaggio.

Anyway, Adrian Beltre of the Rangers went for his third career cycle last night in Arlington versus the Astros. He hit a 2-run triple in the first (getting the difficult hit out of the way first), a double in the second, a single in the third, and a 419-foot home run in the bottom of the fifth.

Beltre finished 4 for 5 with 3 RBI in Texas’ 12-9 win. He becomes the fourth player in Major League history to hit for three cycles in his career (John Reilly, Bob Meusel, Babe Herman), but the first to do so since 1933. Which is, ya’ know, 82 years ago. $15 million-plus per year for 13 years to wear one brand of shoes? How valuable will this contract be if the Rockets never advance to the NBA Finals?

*The judges will also accept “Happy Feet” and “My Adidas”

Reportedly, adidas is offering Houston Rocket guard James Harden $200 million over 13 years. Harden, 25, was the runner-up for the league MVP award last year (the players voted it to him, though). Harden’s chief talent is drawing fouls and growing facial hair.

Harden’s contract with the Rockets calls for him to make about $50 million over the next three seasons, so his adidas deal, if he signs it, would be in the same ballpark of $15-16 million per year. 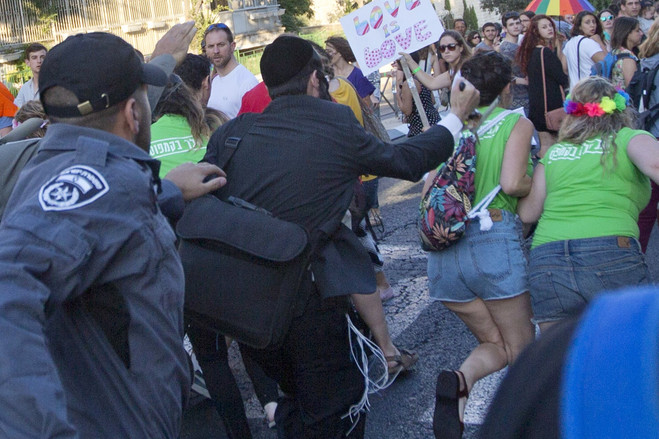 The moment of the fatal stabbing

Is it just me (or is it Twitter) or is everyone in the world a little angrier — and more violent toward one another — than usual? Above, a radical orthodox man stabs a 16 year-old girl taking part in a gay pride march in Jerusalem. She died from this wound a few days later.

I count four guns in this photo, if you include the one on his t-shirt.

Here, a man peacefully protesting the Confederate flag at Stone Mountain, Georgia, encounters a pro-Confederacy advocate armed with a pistol and a semiautomatic rifle. Two cops on hand, and neither has drawn their weapon yet in this photo.

Oh, and two men were shot in the parking lot outside the PNC Bank Center in New Jersey last night following a J. Cole rap show. According to a witness, they were speaking to a woman, making remarks about her body, and a third man stepped out of nowhere and shot them. Both are in critical condition (Am I a terrible person if I admit that I don’t really feel bad for these two?).

I think Mister Señor Love Daddy had it right 26 years ago when he advised, “Whoa. Y’all take a chill. You got to cool that shit off. And that’s the double-truth, Ruth.” 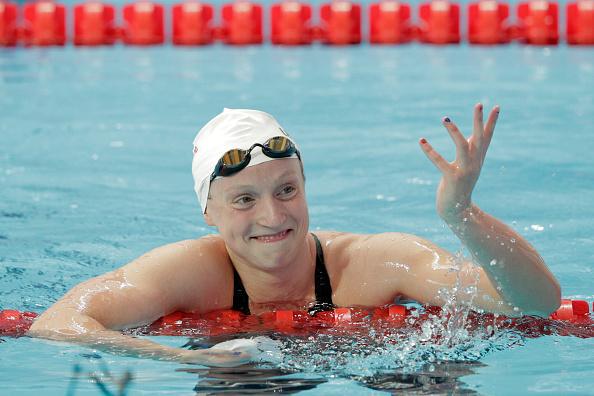 Besides the world records, Ledecky has perfected the “Water Bosa.”

Get ready for U.S. swimmer Katie Ledecky at next summer’s Olympics (thankfully, she will be swimming in a pool in Rio, not in the water outside). You’ll remember that as a 15 year-old at the London Games Ledecky won gold in the 800-m freestyle.

Yesterday at the World Swimming Championships in Kazan, Russia, Ledecky broke her own world record in the 1500-m freestyle. The six-footer, who will matriculate at Stanford next month (I think), now holds the world records in the 400-, 800- and 1500- meter freestyle. She’s got quite the Ironman career in front of her someday.

This photo has absolutely nothing to do with the story below. We learn a lot by reading The Big Lead.

Did you really think Jon Stewart was about to go gently into that good night? On the first night of his final week as host of The Daily Show, Stewart lit into his longtime nemeses, seeing their hypocrisy allegation and raising it. Here’s the video.

You may know Fountains of Wayne for “Stacy’s Mom,” but I love them for this earlier tune.  Just two nice boys who attended Williams College (I had to mention this before Dick Quinn wrote me a note to tell me that).