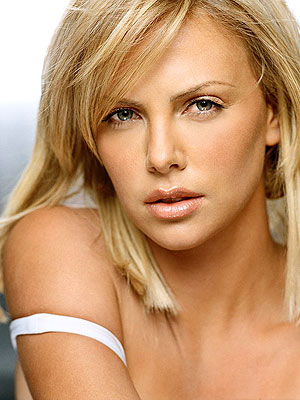 Charlize, angel: Happy 40th to the woman who had to pretend to be romantically interested in Tobey Maguire in The Cider House Rules. Now THAT is acting!

If you love Jons — and I happen to be partial to them, even if they don’t spell their names correctly — it has been a tough few months of loss:

Jon Hamm… Departed from our screens on a weekly basis with the end of Mad Men, although he’s far too funny, handsome and charming to be gone for long. In fact, Hamm was a guest last night on a Jimmy Kimmel Live repeat that aired simultaneously with The Daily Show finale. At one point the other guest, sexy Lizzy Kaplan of Masters of Sex, noted that she would be spending her birthday flashing a man in a gorilla suit and Hamm quipped, “Are they still casting?” 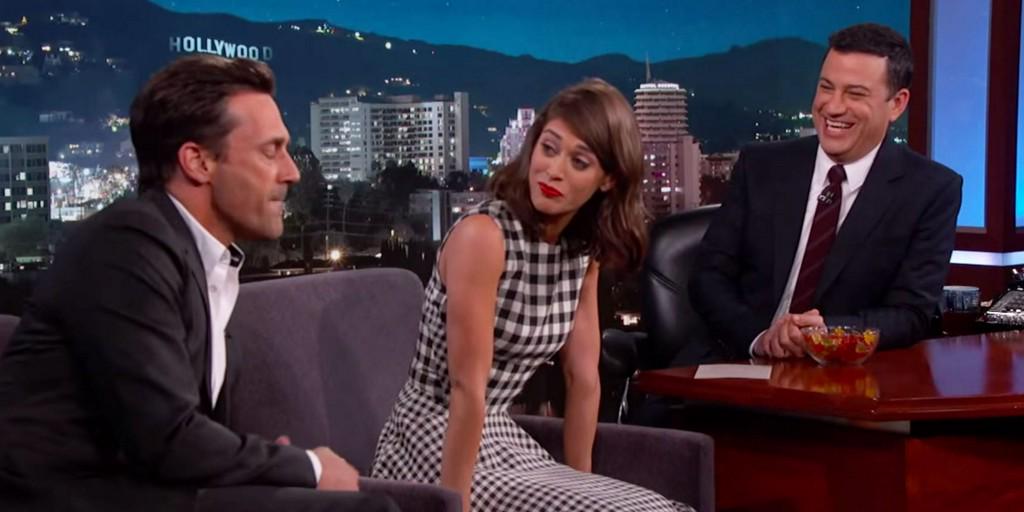 Jon Snow: Murdered in a mutiny by the Night’s Watch. He really did know nothing. Look at all those careers that The Daily Show helped launch

Jon Stewart: Signed off from The Daily Show last night (Sepinwall’s review), but not without an inspiring reunion of his former correspondents (Stephen Colbert, John Oliver, Ed Helms and Steve Carrell, to name just four); an homage to the tracking shot in Goodfellas with a cameo from the man who made it happen, Martin Scorcese; a final warning that “bullshit is everywhere”; and his Moment of Zen, Bruce Springsteen and the E Street Band playing Land of Hope and Dreams before a segue into the climax of Born to Run. For a child of Jersey raised in the Seventies, it doesn’t get any better than that.

2. Know Your Rights (from your Far Rights)

The first GOP debates (jayvee and varsity) were highly entertaining and I imagine Roger Ailes, Chief of Propaganda at Fox News,would love to develop these into a weekly series. My quick takes:

Ted Cruz: Still the man I most suspect of being a birthday party clown with all the attendant baggage.

Ben Carson: When I have Siamese twins, I’ll phone you…but not before then.

Marco Rubio: Impressive. As soon as he starts to shave, he may have a future. Kelly: As Trump and Rubio learned, this kitten has claws

Rand Paul: What is that thing atop your head?

Chris Christie: Moves on to the next round.

Jeb Bush: Those glasses and that pallor. Where’s your cardigan?

Mike Huckabee: Nice zinger that destroyed Trump AND Hillary in one shot. But you look too much like a mortician or someone a mortician is currently working on. Also, when you said, “The military exists to kill people and break things,” I mean, just, wow.

Donald Trump: Hey, the Rosie O’Donnell line made me laugh. But the longer he talks, the more you realize that he has no new ideas. He’s just shouting at the wind.

Megyn Kelly: As myself and my colleague Alex Nazaryan noted, the Fox honey, who has a law degree, is by far the most electable. 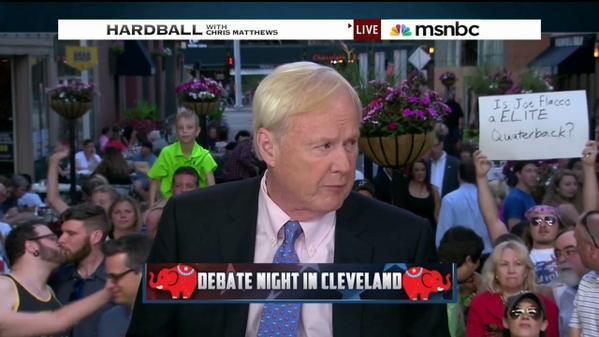 On this day, Lee Corso‘s 80th birthday, how can we not take note of this photo from MSNBC’s debate coverage? Does anything say “ ‘Murica!” better than a grammatically incorrect sign wondering about Joe Flacco’s talent level and a pair of men smooching?

This scene would’ve been perfect if Chris Matthews had donned an elephant headgear at the end of the pre-debate show. Also, that’s @PFTCommenter hoisting the sign.

(Soon to be “Former”) San Francisco 49er linebacker Aldon Smith is charged with DUI, hit-and-run driving and vandalism, and is booked into jail. Linebackers are supposed to run and hit, not vice versa.

Smith becomes the second former Mizzou DE first-round pick to get in serious trouble with the law in the past month over reckless driving (Sheldon Richardson of the Jets). For Smith, a former first-team All-Pro who is still only 25, this could be it in the NFL. This is his second DUI and fifth arrest in the past 3 1/2 years. Former Conn Smythe Trophy winner Patrick Kane of the Chicago Blackhawks is having a face-off with investigators in his hometown of Hamburg, N.Y., on suspicion of rape. Well, that’s not good. Kane has helped the Blackhawks to three Stanley Cups since being drafted in 2007.

The Monkees were a TV show that masqueraded as a band (really), but they were actually good musicians with a few really classic songs in their arsenal. This one, which peaked at No. 3 in 1967, was written by Carole King and Gerry Goffin and is inspired by the road on which King lived (Pleasant Valley Way) in West Orange, N.J.

Two playoff-bound teams and two Cy Young-caliber starters. Clayton Kershaw takes his 37 consecutive scoreless innings streak into PNC Ballpark to face Gerrit Cole, the major league wins leader with a 14-5 record. Besides, PNC is my favorite of the new ballparks.