“I long to hold you tight/So I can feel you/Sweet lady of the night/I shall reveal you”… Happy 70th to Van the Man!

1. How Can You Not SeeWhat Curt Schilling Meant?

Before we tackle that, a few things worth mentioning: 1) I don’t know if the “maths” included in Curt’s tweet were accurate or not. Let’s assume for the moment they were. I’m quite certain the numbers are not what upset Bristol. 2) It never, never, never ever helps to post a photo of Hitler in support of your argument. Ever. 3) When you have Sarah Palin come out in your defense, there’s a segment of the population that is immediately going to even further dismiss the point you were trying to make.

I’ll confess: In the moment, I too lambasted Schilling. I’m not particularly a fan. But then I decided to explore the logic behind his tweet. The thing, I believe, that everyone (including Norby) finds so offensive is the idea that he was comparing Adolf Hitler and the Nazis to Muslims.

Schilling was comparing the Nazi Party to ISIS, and he was comparing Germany, a nation that itself represents and exports mostly beneficial things (BMWs, giant pretzels and, of course, Diane Kruger), to Muslims.

I hate to tell the haters, but this analogy is accurate. Eerily so. Germany in the 1920s was a depressed state trying to recover from a debilitating war in the aftermath of which the Allied nations held it fully accountable. That, plus war reparations, made its populace resentful (and also unemployed and very hungry).

The Middle East countries in which ISIS operates most effectively are Syria and Iraq. Again, countries depressed by recent wars with a citizenry operating with a low self-esteem as to its place in the geopolitical lunch room.

How could these innocent boys cause such a, um, furor?

The Nazis started out small — the Hitler Jugen, or Hitler Youth, numbered less than 500 lads its first year — but it gained a deserved reputation for being violent and implacable, and it valued loyalty above all other traits. Sounds a little bit like a caliphate we’ve been reading about.

Hitler first heard about the Nazi Party, then joined it, then used his ridiculously persuasive and charismatic rhetorical talents to bring the party under his thumb to advance his goals, which were to create a master, or Aryan, race. Hitler had a goal of excising all people who did not fit this mold from the planet, and he used his SS squads to carry out this plan via mass executions involving gas chambers, ovens, hangings and shootings.

Hitler came to represent Germany because by the time Germany realized the extent of his madness, it was too late to stop him. He had violence and the youth of the country on his side, and he was operating through intimidation.

All ISIS lacks is a charismatic figurehead. But it’s operating from Hitler’s playbook. It is actively recruiting disaffected young people; it brooks no compromise in terms of what its goals are and it accepts no one who does not fully buy into ITS definition of Islam; it uses intimidating and barbaric violence to subdue anyone who would dare threaten its rise: beheading people, throwing homosexuals, while bound, off rooftops, and even cutting off the feet and/or hands of recruits who have dared attempt to escape.

…and ISIS death squads. You’re right, Norby. No resemblance at all.

It’s a different part of the world and its victims are, unlike the Jews, not well-represented by having relatives in the United States, but ISIS really is very much like the Nazi Party.

The essence of ESPN’s misunderstanding, and that of others, is to infer from what Schilling said that the religion of Islam is evil or bent on the destruction of good people by its inherent nature. That would be like saying that Germany is a nation that by its very nature is bent on war with its neighbors. But, of course, he was not saying that at all.

What he was saying is that an extremely radical and violent group, operating within the environs of a larger entity and purporting to speak for that larger entity, may just, if left unchecked. take over the will of that entity. In fact, if Schilling had compared ISIS to a malignant tumor that is on the verge of metastasizing, he would have been no less accurate and probably would not have been suspended.

But here’s the real danger of what transpired last week: fear and panic overtook intelligence. No, Schilling’s 1st Amendment rights were not trampled: no one put him in jail for what he said. But, it’s a very dangerous thing when people have no interest in exploring the verity of your message but are rather only concerned about how what you said makes them feel.

You blew it, Norby. Again.

“Leaving on a jet plane/Don’t know when they’ll be back again…” (the NLCS?)

After Jake Arrieta no-hit the Los Angeles Dodgers last night, manager Joe Maddon had them all don pajamas for the flight home to Chicago. This alone may earn Maddon Manager of the Year votes.

The Dodgers have now been no-hit twice in the past 10 days. As someone (or many) tweeted, This is what a $300,000,000 payroll buys these days. L.A. becomes the first team to be no-twice in the same month as the 1971 Cincinnati Reds –who would go on to win a pair of World Series in the next half-decade — and the first to be no-hit in that short a span of time since 1923.

Then again, there was a play in the third inning that was ruled an error (against Starlin Castro) that may just as easily have been ruled a hit. Even Arrieta thought the hard one-hopper hit by Kike Hernandez, misplayed by Castro, was a hit. You decide.

Still, Arrieta,  was masterful, with 12 Ks, including striking out the side in the 9th. He finishes August with a 6-0 record and a 0.43 ERA, which is positively Dodger-ace like. 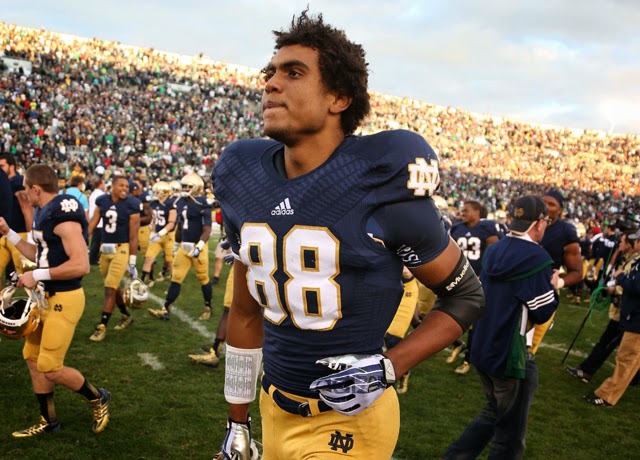 Take a look at this photo and ask yourself what, or who, is missing? That’s Notre Dame wideouts Torii Hunter, Jr., Will Fuller, Amir Carlisle and Chris Brown. Fuller, No. 7, had 15 touchdowns last season. The other three combined to score five TDs, or the exact same number that junior wide out Corey Robinson had all by himself.

And, if that last touchdown in Tallahassee would have counted, you’d have to give Robinson six. So where is he? Why did Notre Dame exclude him from the picture? Is it a by-product of the Four Horsemen strategy, in which you can never have more than four players in a publicity still? If so, how do you explain the shot above?

I’m sure there’s a reasonable explanation. We’ll wait to hear from the ND sports info dept.

Darren Rovell chided anyone who would assume that racism is even the least bit involved as to why Maria Sharapova, who yesterday withdrew from the U.S. Open with an acute case of Serena-itis, earns more in endorsements than the world’s greatest female tennis player of perhaps all time.

And then Bomani Jones took him to school...as he is wont to do.

This is not the first Rovell vs. Bomani battle, but I do believe it’s the first since Rovell re-joined ESPN.

The summer and fall of 2004 provided a slew of great rock band pop hits: “Float On,” “Take Me Out” and this one by The Killers, in which lead singer Brandon Flowers suspects his gal is cheating on him with Julia Roberts’ brother. Of course.

The tune topped out at No. 10 on the Billboard chart. It’s also the first song that this Las Vegas-based band ever wrote. And still the best. 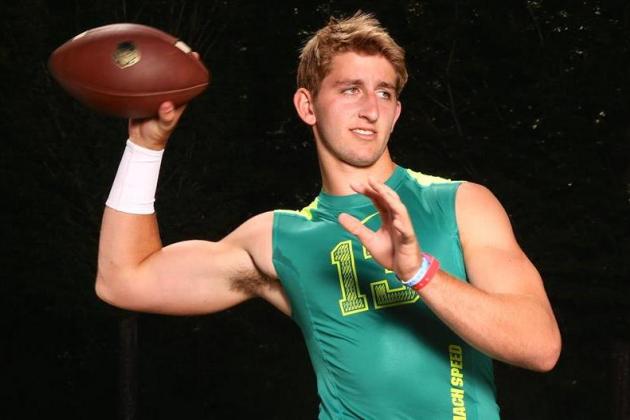 To get you in the mood. Host Rob Stone with Joel Klatt, Matt Leinart, Dave Wannstedt and Bruuuuuuuuuuuuce Feldman!