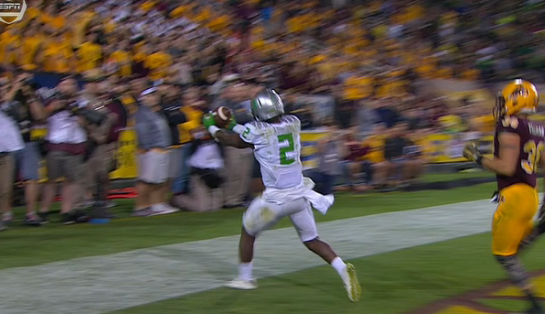 The Pac-12 hottest new nightclub is “Tempe’s Tillman Tempest!” It has everything! A kickoff run back for a TD, Tess & Jess (but not David: a punishment for last week’s fine northern California whine?), the world’s shortest Hail Mary pass (to force overtime), three overtimes, the most points scored in one contest this season (61-55, or 116), a funny joke from Twitter about this being the longest uninterrupted stretch of time that Oregon has ever worn the same uniform, a team of “Tillman,” a guy named Stanford scoring two touchdowns for Oregon, Bercovici playing well but failing to come though on the Bercoveni, Bercovidi, Bercovici thing, a falling tight end trick play for a TD… 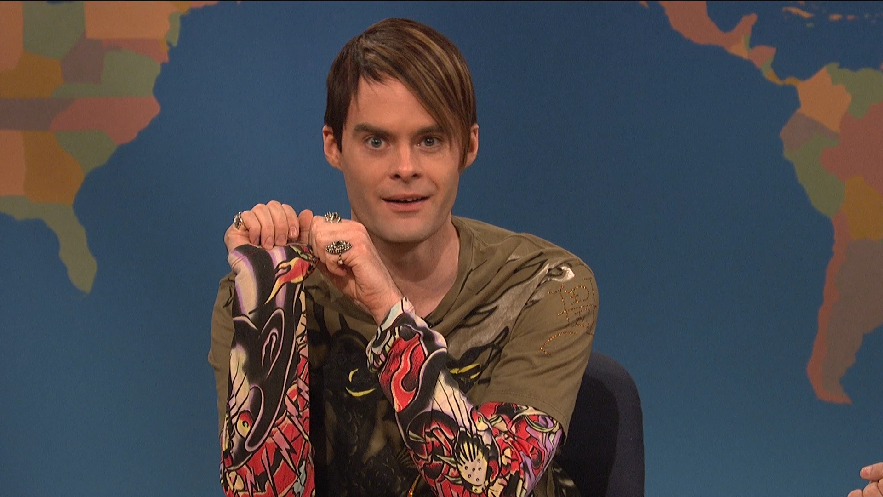 …an overturned INT by the Ducks (that did not seem to have INDISPUTABLE evidence) and the above game-winning TD by the Ducks that was NOT overturned (even though it sure looked to us that the the toe went into the white area) and reminded those of us who are old enough of that episode of the Brady Bunch where Greg took a photo of the receiver’s foot landing out of bounds (or was it inbounds) that I will contend to my death bed was the beginning of “under further review” (deep breath), and, oh, in the Valley of the Sun, a game-ending INT on a slant-in pass from 2 yards out, a salute to Valley native Darrell Bevell (who called a similar play in SB49), made by a dude named Arrion Springs, who sounds like a wonderful place for a four-day weekend. The Mets (LGM!) are installing VIP seats for Game 3 on either side of home plate that seem obnoxious even for New York. It’s “Meet the Mets!”, not “Smell the Mets!” If you’re wondering how pricey these seats are, they’re not even up for sale. They’re going to members of MLB, the Mets and VIPs. I think we’re all hoping for a screaming liner that runs foul, no?

If he had attempted to do this, I doubt Sporting KC’s Saad Abdul-Salaam would have been able to perform this foot feat in fewer than 20 tries: Have your shot hit one post, then ricochet off the other, and never cross the line for a goal. That it happened during the penalty kicks phase of a knockout round game in the MLS playoffs at Portland only makes it more painful.

Kansas City fans will eventually get over this. Perhaps as soon as this evening.

(The judges will also accept “I Heart Huckabee’s Rant”)

*Rule No. 643: Never miss an opportunity to drop in an F-Troop reference.

Before this kerfuffle, um, floats away, I think we need to address the runaway blimp. Better yet, we need to address how Mike Huckabee was so deftly able to turn it into a metaphor for government during Wednesday’s night’s debate only hours after this became a national story. My primary question: Why were John Oliver‘s writers moonlighting for the Huckabee campaign? I’m sorry, this rant was simply too good for it to have been conjured on the fly.

“It’s a perfect example of government,” the former Arkansas governor said. “What we had was something that government made. Basically a bag of gas that cuts loose, destroys everything in its path, leaves thousands of people powerless. But they couldn’t get rid of it because we had too much money invested in it. So we had to keep it.”

The early Nineties were the last throes of MTV’s musical relevance — not coincidentally, it was also when the first season of Real World aired — and Soul Asylum were one of the last bands to really break big on the network. While “Runaway Train” was the big single from 1992’s Grave Dancer’s Union album, this one always seemed to have more more meat on the bone. And if you like that one, this one is even more unappreciated.

Owl be seeing you, Jahad Thomas

First of all, I’m referring to the College GameDay location as “Independents Hall’ tomorrow. Second, Temple of Doomed. The Owls are 1-41 all-time versus ranked teams and they’re playing a Fighting Irish team that is not only coming off a bye week but also off a week of fall break (no classes last week). Third, in their two previous road games this season the Irish needed a last-minure go route to Will Fuller to beat Virginia and then lost by 2 at Clemson, so I think Brian Kelly has their attention. I don’t think this will be close, actually.