The Man would have turned 39 today. 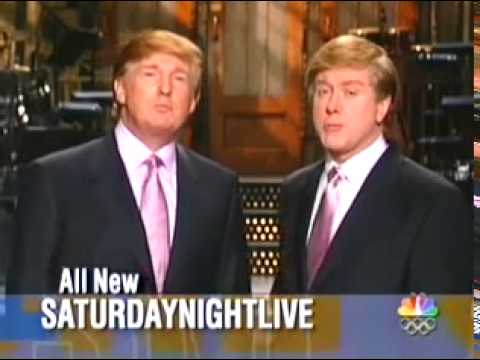 Anyway, Donald Trump is HOSTING SNL tomorrow and this has quite a few people upset. And I don’t get it. Most people who oppose a Trump presidency, if I were to go out on a short limb, define themselves as liberals, and as such are fierce protectors of the First Amendment. And that’s really all this is: a late-night comedy show is exercising its First Amendment rights.

If you want to argue that it’s unfair that Trump (Stephen Colbert last night opined that the new film Trumbo is about the love child of Trump and Dumbo) gets 90 minutes of air time that the other candidates do not, my rejoinder is A) He’s not the musical guest, too; it’s not really 90 minutes B) It’s 2015 and we’re going to have more than a dozen freaking debates; I think all of these candidates are receiving adequate air time, C) If seeing Trump on SNL is what persuades someone to vote for him, then maybe we deserve the government we’re getting and finally, D) if you TRULY wanted to protest Trump’s appearance, the best thing to do would be to simply ignore it — and not watch.

Oh, and you and I are SURE that this just got accidentally leaked (funny, by the way; and that is the only mandate SNL serves, or should serve).

From two nights ago, but every year Brad Paisley and Carrie Underwood rule as hosts of the Country Music Awards. How happy they must have made Disney CEO Bob Iger on Wednesday night, as the show aired on ABC and they were able in their monologue to slyly work in product placement for both Star Wars and The Muppets. Stick around for the wonderful dig at Blake Shelton, who took it like a champ (No Gwen? Too soon?)

3. Why Haven’t You Written a Think Piece on What the Demise of Grantland Says About Journalism Yet?

Grantland Rice on his iPhone. Granny actually played football at Vanderbilt and also served in World War I before writing heroic ledes

When I was in high school, our school newspaper (“The Round Up”) had an editor who would use as many Led Zeppelin songs titles as headlines as he could get away with. He didn’t do it because the titles made great heds, but rather because he was simply being self-indulgent. That dude, Keith Blanchard, later went on to become the Editor-in-Chief of Maxim. You can look it up.

I don’t know what that ditty says about anything… I really enjoyed Andy Greenwald’s Game of Thrones recaps and also anything that Mark Titus had to say about college hoops — he actually channeled the early Simmons’ combo of passion for a sport with a scoundrel’s sense of humor quite well. I did not read it much beyond that. So I’ll miss some of Grantland; I missed My So-Called Life, too, but it didn’t garner ratings.

As for Clay Travis’s advice, here’s what I’d say: Do NOT go into writing to make money. Go into writing because you want to express yourself and because you have that itch. If you’re trying to become wealthy or worse, famous, you’ll probably either wind up compromising your values or will have revealed yourself to have none at all. And if you had no values, why didn’t you just become a hedge-fund manager in the first place? You’d have dressed and eaten better earlier, you know.

Meanwhile, if you follow your heart, you may have a long, slow trudge to wealth and success, but eventually you’ll be able to sue your employer for age discrimination. So there’s that….

What is about Cookes and the Pacific? (I know, the other one had no “e”)

He was 59. Alec “Ace Cool” Cooke was known as a lone wolf among the Big Wave surfers, but he had lived in Hawaii since age 6, the scion of one of Hawaii’s five established sugar plantation families.

Last week he paddled out into Waimea Bay on Oahu’s North Shore to catch a set at twilight, and he has not been seen since. His board was recovered, though, minus the indentation of a shark bite. It’s sort of a legendary way to go if you’re a surfer. I mean, that’s how Bodhi went.

No Day But Today

There are better-known closers to end “Show Tunes Week” with, but first of all, we’ll do it again (do not despair), and second, I was lucky enough to see the original cast (almost all of whom are here in this film version) on Broadway, a group that included Taye Diggs, Jesse L. Martin, Anthony Rapp (yes, he was in Dazed and Confused, too), Adam Pascal and, of course, Adele Dazeem. I still get goose bumps listening to this.

It helps if you remember/know that the show’s creator, Jonathan Larson, died unexpectedly the night before the show’s off-Broadway premiere, which really hammered home that “Life is precious” theme he was going for.

There are people out there who bitch and moan about Verne and Gary, and I simply don’t understand those humans…at…all. The No. 1 CBS crew don’t get every last fact right, but they’re having F-U-N. And aren’t sports supposed to be fun (or did we all lose sight of that fact years ago)? Two fantastic games (with Notre Dame-Pitt as a noon brunch) with legit Heisman talents in Dalvin Cook and Leonard Fournette. Putdown of Clemson I saw from an FSU fan this week: “Clemson’s ‘tradition’s are getting in a bus, touching a rock, and running down a hill. I went to pre-K, too.”