A Medium Happy 30th to Aussie actress Teresa Palmer, who appears in Triple 9, which is being released today. How’s that for a way to celebrate?

There did happen to be two other men in the debate, but this is as wide as the CNN lens went

Wow, what an—Polish workers—incredible—Polish workers—debate from Houston, even if only 60% of the GOP candidates were invited. A few of the highlights:

“Can somebody attack me, please?” –Ben Carson gets off the line of the debate, if not of his entire campaign.

Carson flashing his hands as if this were the measurements portion of a GOP Combine, noting that a film was made about them. John Kasich basically telling radical Christian conservatives to get over themselves about baking wedding cakes for gay couples: “If you are in commerce, do commerce, and maybe pray for them later.”

Donald Trump: “Bigly.” (although he may have been saying “big league.”)

Marco Rubio: “Palestinians are not a real-estate deal.” Actually, Marco, that’s kind of what the entire discord is all about.

Ted Cruz, when told by Trump that he will not “allow people without health care to die in the streets,” wonders who will pay for it.

Carson: “The fruit salad of our lives.”

Anderson Cooper congratulates colleagues Wolf Blitzer and Dana Bash on the debate. Wasn’t that their job?

Terron hopes to play running back in the NFL.

At Indianapolis’s other combine, the National Scouting Combine, Terron Beckham bench-presses 225 pounds 44 times. No one has ever done that many reps at the NFL Combine who was not an interior lineman, and only five of them have exceeded that. Ever. Odell’s cousin, who is the same age as he (23), never got into a college game (he quit after half a season at a D-3 school near Baltimore, but some NFL team is going to at worst sign him as a free agent. Ridgeway is the lone Longhorn in Indy this weekend. Two nights ago, but Trevor Noah crushed Dr. Ben Carson on The Daily Show for saying that Barack Obama “did not grow up black.” Funny, funny stuff.

In a totally unrelated matter, Samantha Hoopes (above) is still wondering, “Wait, you put Ronda Rousey and that chunky gal on the cover and not me?!? WTF?”

Okay, question. Tokyo Sexwale: FIFA presidential candidate or illicit fetish euphemism from Better Call Saul? Answer: FIFA. Sexwale and Jerome Champagne (no, really) are both candidates in today’s FIFA presidential election in Zurich, although the favorite seems to be Sheik Salman Bin Ebrahim El Khalifa, whose first order of business if elected will be to say, “Please, everybody, call me ‘Sal.'”

Also, worth noting that the Albuquerque Isotopes announced that they will be wearing these BCS-themed jerseys for their August 6 home game. “You will atone!” 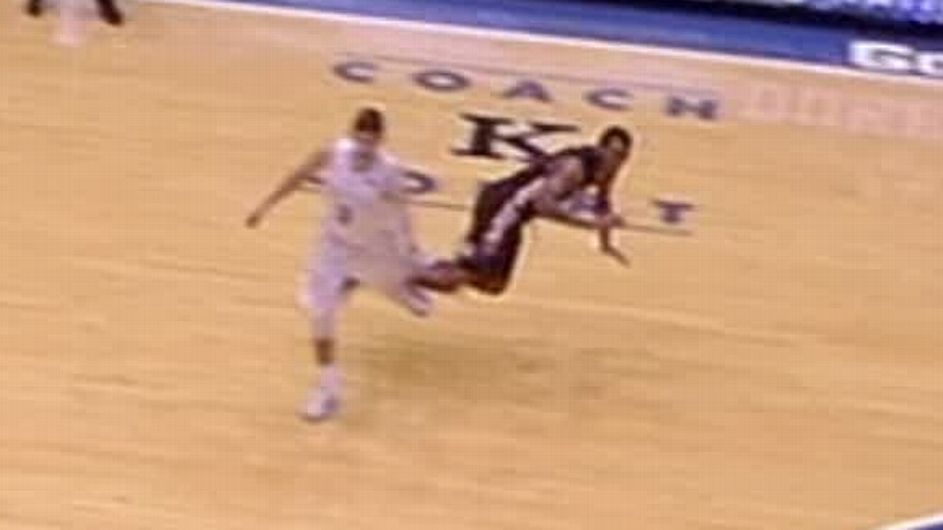 I guess we shouldn’t let the weekend begin without noting Grayson Allen’s punk work last night in Durham. I’ll hand it off to The Big Lead here to discuss. Will only add that this, to quote young Mr. Allen himself, is “(bleeping) bulls(bleep).”
Notice the criminal mind of Allen, acting as if he’s innocent and walking over to help the FSU player up as if it were an accident. And notice how the Seminole player gets up and does not accept Allen’s offer to assist him.

Today is Phoenix native and The Format alum Nate Reuss’s 34th birthday. Here’s one of his two breakout hits from 2012 with Fun. It peaked at No. 20. Love Nate Reuss, love that incredible voice of his. Chris Rock returns as host. Leo as supposedly a 1 to 50 favorite to win Best Actor (you bet $500 to win $10). “Spotlight” has a chance at Best Picture, but “Spawtlight” does not. And as I’ve said before, if the bungee-cord hanging guitarist from Mad Max: Fury Road is not incorporated somehow into the proceedings, then that’s a major, major fail.

Did that dude even have a name? And how soon until Velvet Revolver signs him?