I was on a train on the loveliest spring day on Thursday afternoon when one of my two favorite Minnesotans, Katie McCollow, sent the following text: “What the effing eff. Prince can’t be dead.”

That’s how I learned Prince had died. As bummed as I was by the news, I’m glad I heard it from a Minnesotan.

Katie and her husband Mike (my other favorite Minnesotan) were born in Minneapolis, were raised in Minneapolis, and will die in Minneapolis (for all the flirting they both do with the American southwest). And so I asked Katie, who’s the most talented writer I know who lives within 10 miles of Paisley Park—either her or her brother, Billy—to write a few words about Prince. Katie, being the decent Minnesotan she is, complied. Enjoy.

“The best thing Minnesota had is gone.”

“What about Bob Dylan?”

—The comments section of my daughter’s friend’s Facebook page

And that, my friends, is pretty much it in a nutshell.

Oh, I should warn you, this is another Prince piece, so if you’re sick of reading them, well, I don’t know what to say. I guess you could go read about whatever other dumb thing happened in the world over the last few days, but why you’d care about anything else right now is beyond me.

I’m a born and raised Minnesotan, specifically a Minneapolitan, and I know the whole world is weeping purple tears right now…but it’s different here. Our tears are purple and made of cream of mushroom soup, and Prince totally would’ve gotten that. 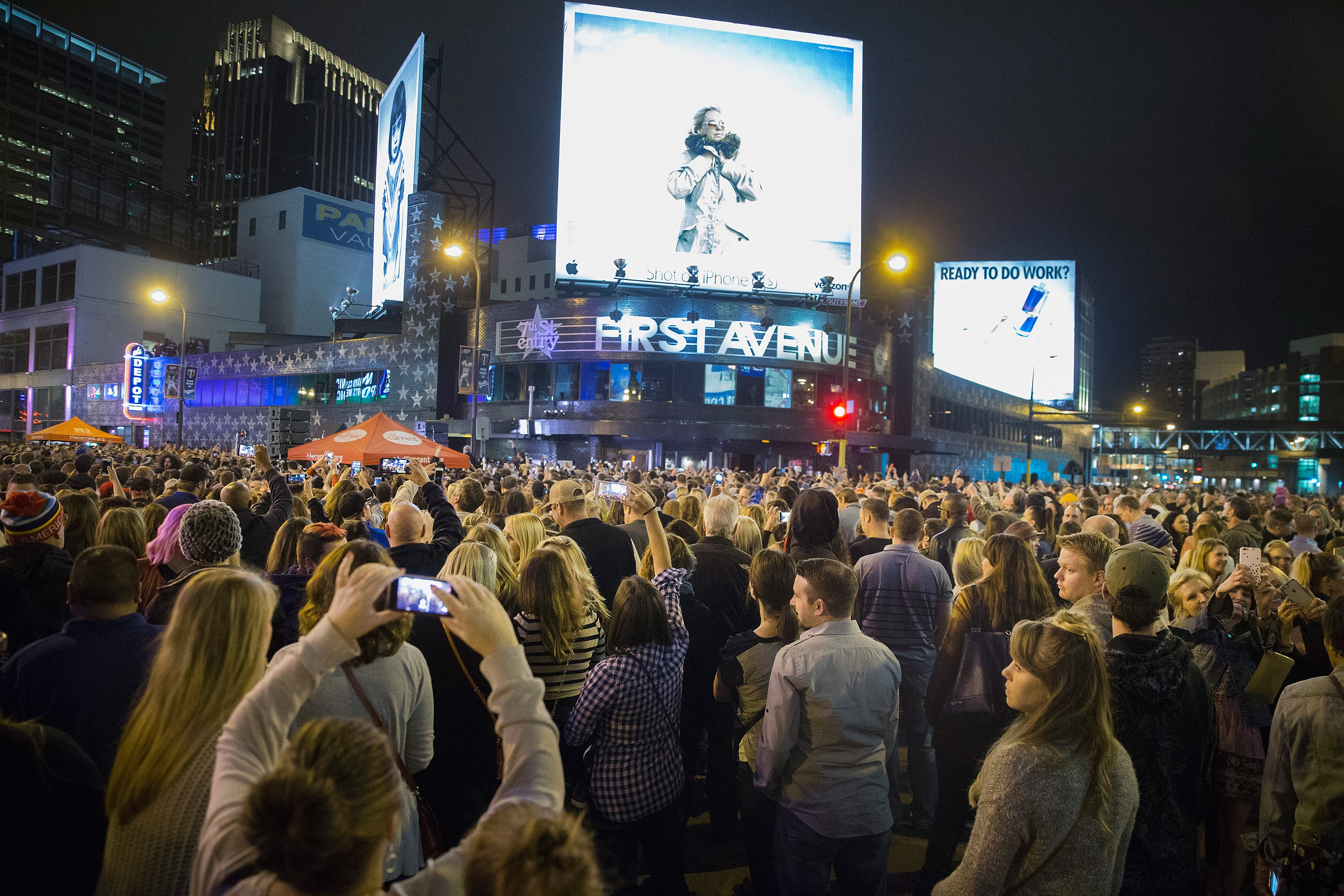 There’s nothing I can add to this topic, information-wise; you’ve probably already read and heard whatever sad details of his death are available. All I can offer is my own thoughts and feelings from here in Prince’s ground zero.

I go by Paisley Park all the time—it’s very close to one of my favorite places on Earth, The Minnesota Landscape Arboretum, which I’ve been told Prince loved, too. If you think your state has a good arboretum, I am very sorry to tell you this, it is completely lame next to ours.  Comparing your arboretum to ours is like comparing whatever local singer in your town who made it onto The Voice to Prince. Yes it is, so please just stop turning red and calm down. You probably have a football team that doesn’t shit the bed every playoff season, so it’s okay. (Hey! I wrote something about sports!!)

This is, like, the dumpster area at the Arboretum (a mile from Prince’s home)

Anyway, Paisley Park looks like a giant version of that game Don’t Break the Ice. It’s seriously ugly and weird from the outside, and it just sits there on the side of the highway and it seems like maybe you could pull in and get your oil changed. There are no giant gates, there’s no tree-lined driveway or anything that screams “THE COOLEST PERSON IN THE WORLD LIVES HERE,” which simply adds to the fact that Prince was the coolest person in the world.

Everyone here has a Prince story, or at least a six-degrees-of-Prince story—he was rather regularly spotted around town, not just at clubs, but at the movies, restaurants, shopping at the record store, doing all the same things the rest of us did. He lived across the street from my best friend for a time. He went to high school with my cousins.

There’s a picture floating around the Internet, taken last Saturday, of Prince out riding his bike. Because it was nice out, and when it’s nice out here in April, we do stuff like ride our bikes and plant flowers even though anyone with any sense knows you shouldn’t plant anything until Mother’s Day. I loved the tweet he sent out that same day, when he invited us all over for a dance party “2 GIVE THANX 4 THE GOOD WEATHER AND ALL 4 ALL THE LOVE AND SUPPORT”. When we get a good day in April, we rejoice.

I know this probably all sounds stupid, like that “Stars—they’re just like us!” section in US Weekly—Hey, Prince shopped at Walgreens! Neato–  he had to get his cold medicine and Gummi bears somewhere, right?

Except yeah, it was neat. It was flipping amazing, because he was PRINCE. Spotting him around town didn’t take away from the magical feeling that you’d spotted a unicorn. The fact that he was willing to invite his community over sometimes and be a super gracious host…You guys, c’mon. Do I even need to tell you how incredible that felt? The last time my nephew went to one of his impromptu home concerts, he was served pancakes at dawn. Prince fed my nephew pancakes.

His Purple Reign will never end

That’s why this hurts so much for us. Look, Minnesota is a great place, and we have a thriving arts community of which we are very proud. But he elevated that, first by becoming PRINCE, and then by staying. Right here. We were the nerdy girl who, yeah, had a lot going for us if anyone was willing to look past our glasses and ponytail and get to know us, and he was the unbelievably cool kid who not only took us to the prom and revved our little red corvette, he actually did call us the next day, in fact he fucking married us, and almost 40 years in, he was still bringing us breakfast.

He could’ve gone anywhere, and he would’ve been the biggest star wherever he was, but he stayed. His loyalty to us made our loyalty to him that much stronger.

The stops are pulled out everywhere—driving down the street, I can hear his music blasting from every car (The Very Best of Prince has finally kicked the Hamilton soundtrack out of my own CD player), we’re all in purple, the dance parties and Purple Rain screenings just keep coming…tonight there’s a screening planned at the Twins’ stadium downtown.

My son, a high school student, asked me Thursday night if he could go downtown, where the streets were blocked off outside First Avenue and thousands were gathered for an all-night dance party. I think he thought that I was going to say no. I told him he absolutely had to go, and I was glad he wanted to. He slept through his first few classes Friday morning, and so what?

I hate the circumstances, but I’m so glad my kids and their peers have the opportunity to truly understand the importance and the impact Prince had not just on the world, but specifically on our city and state. Because before Thursday, I’m sure it was more like a cool anecdote for them.

He was not like us, and by “us,” I mean those of us who grew up alongside Prince becoming PRINCE. I was in 6th grade when my friend Kristy introduced me to his music. We were shooting hoops in my backyard, and she asked me if I’d heard of him, which I had not. We listened to Controversy and stared at the album cover, and an alarm bell went off in my pants. You guys, my dad famously yanked Billy Joel’s The Stranger off our family’s turn table and snapped it in half when he heard the lyrics to “Only the Good Die Young”. If he’d known what Prince was whispering in our ears, he would’ve burned the house down. And Prince only lived a couple of miles away.

One of my first thoughts upon hearing he died was, “The Virgin Mary’s hall pass just showed up”.  I’m sorry if that offends you, but take it up with God, I didn’t invent Prince.

And when the movie Purple Rain came out, we saw it every Saturday night and rejoiced. The whole wide world was looking at our hometown hero, and all the accompanying scenic shots of the places we all hung out. To say we were proud is the understatement of every lifetime for eternity. And he just kept getting  bigger, and better, and still, he stayed.

Anyway, I’ll leave you with this, a quote from Carver County Sherriff Jim Olson: “To you, Prince Rogers Nelson was a celebrity. To us, he was a good neighbor.”

29 thoughts on “KATIE ON PRINCE”