Just once I’d like to hear the shark’s feelings on all of this. All that persecution and death through the years in Hollywood — does the species not have feelings? Where’s the love for the best supporting actor in horror – the bad-ass, shit-kicking shark?

What you will always see is a shark’s point of view. The b-movie master himself, Steve Spielberg, perhaps swiping the POV shot from The Creature From The Black Lagoon, made it famous in the opening minutes of the summer all-timer Jaws, with the death of poor, doomed Chrissie, the camera pulling close to the nubile woman’s legs.

And he does it again with the Kitner boy and his raft. That blockbuster is middle-aged now, 41 years old, but these moments are still unspeakably scary. When treading water in the ocean, we are not an apex predator — we’re flailing prey. And yeah, you better believe we see that POV shot in The Shallows, sometimes as a misdirection moment, and others, as a dinner party with a very hungry local.

The Shallows swipes elements from other movies as well—Blue Crush at the start, the original Alien at the finish, and the island survival flick Castaway in between. Taking another step back, the script is basically an aquamarine Halloween, with a hottie on the run from a killer and finding the strength to survive as the body count rises.  Replace Jason Voorhees with a great white and sprinkle in some lovely scenic shots, and you’ve pretty much nailed the story. It’s a copycat flick from start to blood-soaked finish, but it does look pretty in the spray and sun.

I raised the movie ½ star due to degree of difficulty for its lead, Blake Lively. Like a young Sigourney Weaver in Alien, Lively is dealing with/fleeing from a really nasty something with razor-sharp chompers, all the while wearing something skimpy and somehow not making it look gratuitous. This forces an actress to emote with her entire body and though special effects artists CGI’d her face on another young blonde during the hard-core surfing scenes (hello, Blue Crush), it really is Lively everywhere else and she holds nothing back. 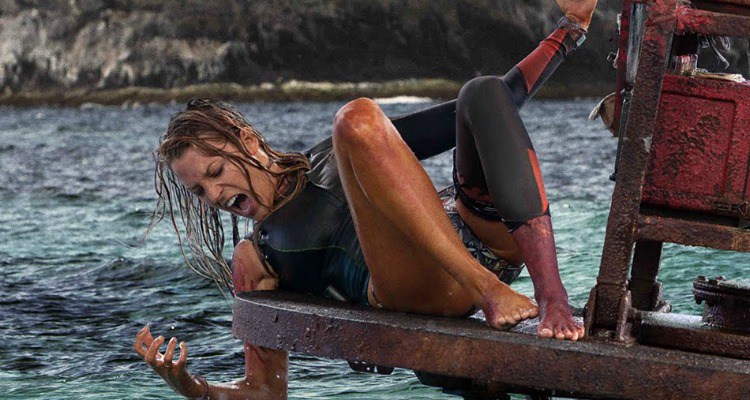 You can’t say Lively doesn’t test herself here as a performer. Whether shivering on jutting coral for a long stretch or fumbling desperately in the salt water for shells of a flare gun, she is the focus of almost every shot, every scene. Other deaths are captured from her vantage point (a close-up of her terrified face, for example) and she does a fine job keeping it interesting while stranded in one spot for most of the running time. And here’s the Captain Obvious confession: from the trailer I expected to appreciate her physical attributes (I did. It’s impossible to miss. You see her body from every angle), but I walked out of the film thinking there’s much more to Lively than a yoga-tight bod if she picks the  from here on out.

I suppose you’d like to know the plot now. I waited this long because it really isn’t all that necessary. Lively plays a medical school student named Nancy who is running away from feelings of helplessness about her recently-passed mother. Backstory? Check. Nancy soon finds a beach in Mexico that her mom once loved, and after a few well-edited surfing montages (there’s some nice sound design of a hip, montage-y song playing, then the sound dips out when Lively duck-dives underneath some massive waves.), well, she went out too far. Check II. It’s getting late. Check III. What’s a whale doing here? WTF? Check IV.

And then … oh shiiiiit!

I mentioned Castaway earlier because like the Tom Hanks character, who is established as an award-winning sailor quickly, it’s understood that the Lively character has the medical background to survive a bite or two from Mr. Wide Mouth. Like the Hanks character, she is inventive enough to handle the life or death circumstances she can’t quite swim away from.  There’s even a Wilson the Volleyball figure in The Shallows, played this time by an injured seagull, who Lively talks to in moments of desperation and humor.

That cute bird, I’m sure, is now reading scripts and fielding calls from rival agents while seated at a corner courtyard table at the Chateau Marmont.

And what about the big fish? Does Mr. Big Stuff deserve representation for his or her acting in The Shallows? I say yes. Another CGI-construct, this great white was sleeker, faster and hungrier than the rubberized figurine Spielberg stuck in the Atlantic off Martha’s Vineyard 41 years ago. Was it scarier? No, of course not. You can’t beat the king. That piece of not-quite-waterproof rubber deserves a lifetime Oscar. But it’s still frightening enough on a big screen to keep things tense. Spielberg and his big star

I won’t knock the totally implausible ending of The Shallows, because the ending of Jaws was just as ridiculous. And a movie review is no place to champion the real-life scientists who spend their professional lives quite rightly trying to debunk these films and show the public that great whites are actually awe-inspiring, mysterious and misunderstood.  I’m sure those big brains realize like the rest of us that if it bleeds, it leads in horror – a very lucrative business in the land of make believe out there in Southern California. That may never change.

What should change, I kid, is this: shark typecasting! They continue to be the most typecast characters in Hollywood. Where’s the part where these creatures use their jaws to kiss — not to chew on unlucky co-stars?

One thought on “The Film Room with Chris Corbellini”