A Medium Happy 38th to Josh Hartnett, whose movie career now exists on the side of a milk carton Ted Cruz: Red and white (or Hispanic), but not blue.

*Sure, the judges will also accept “Boos Cruz” or “TED Talks” or “What Did You Expect From The Guy Whose Dad Murdered JFK?”

Lyin’ Ted Cruz spoke at RNC Day 3 and defied the delegates in the crowd by saying, “Vote your conscience” as opposed to “Vote Donald Trump.” That drew boos and ire. Apparently those are mutually exclusive acts.

It’s as Cruz were Dylan and The Band plugging in and refusing to play their set acoustically. Plenty o’ pundits (including everyone’s favorite Trump-by-numbers sports personality, Clay Travis) said that Cruz committed treason against the GOP. Did he?

Or was this a shrewd plan? Many, many GOPers cannot stand that Trump and his minions have hijacked the party. Most have either remained silent (the Bush presidents) or mildly capitulated (Marco Rubio basically Skyped in his speech). But Cruz, who had more reasons than anyone who ran to loathe Trump, remained true to what he’d said for an entire year.

The fallout? If Trump wins, the worst that will happen to Cruz is that he’ll remain a big deal Texas pol. If Trump loses, and everyone in the GOP wakes up and realizes they’d been going off the rails on a crazy train, he can be the one candidate in 2020 who can claim, “I never abandoned the ideals of the GOP; I never bended the knee to Trump.” He’ll be the one candidate who stands out for that, while others will weakly claim to have done the same. But Cruz will be the only one who stood up at the RNC and did it. Another day at the RNC, another instance of Trump campaign manager Paul Manafort (who should know better; he has two degrees from Georgetown) blatantly lying.

Another day of tribalism over democracy by Trump supporters.

Another day of some GOP leader (last night it was Newt Gingrich) saying that we should “declare war on ISIS,” an entity that holds no land and would love nothing more than to have its identity bolstered by that formal declaration. It would be like inviting Ball State to play in the SEC: It provides them a high profile that they haven’t earned and would only help in ‘cruitin.’ You declare war on sovereign states; you don’t declare war on fringe movements. How’d that “War on Drugs” go?

No, of course Laura Ingraham did not make a “Sieg Heil” salute. Why would you think that? Everyone waves that way, with their palm directed to ground and arm locked and extended at a 45-degree angle. Just another lame stream media controversy.

Anyway, I’m not being hyperbolic here: The Trump movement inside the GOP is the ugliest, most nationalistic, tribalistic and racist movement from a presidential candidate I’ve ever seen in my lifetime. The most important thing you may ever do as a citizen of this country (unless you’ve served in the military) will be to not vote for Trump in November (I’m sure you’re shocked to hear me type those words).

3. What Part of “Hands Up” Do Cops Not Understand?*

The man laying on his back, hands raised in air, was shot by police. Obviously he was a threat.

The man with his hands in the air is 47 year-old Charles Kinsey, who is an employee of an assisted living facility. The dude sitting up is a 23 year-old autism patient who was holding a truck and was suicidal. This was in North Miami yesterday. The key difference between the two men, sorry to say, is that Kinsey’s black. Because even though he is holding what appears to be a non-strenuous Yoga pose (consult your local Lululemon clerk), cops still shot Kinsey.

Why isn’t this getting more attention? 1) He didn’t die. 2) Every cable news channel has tunnel vision on Cleveland this week.

4. “What do you think? Funniest guy? Funniest black guy?” 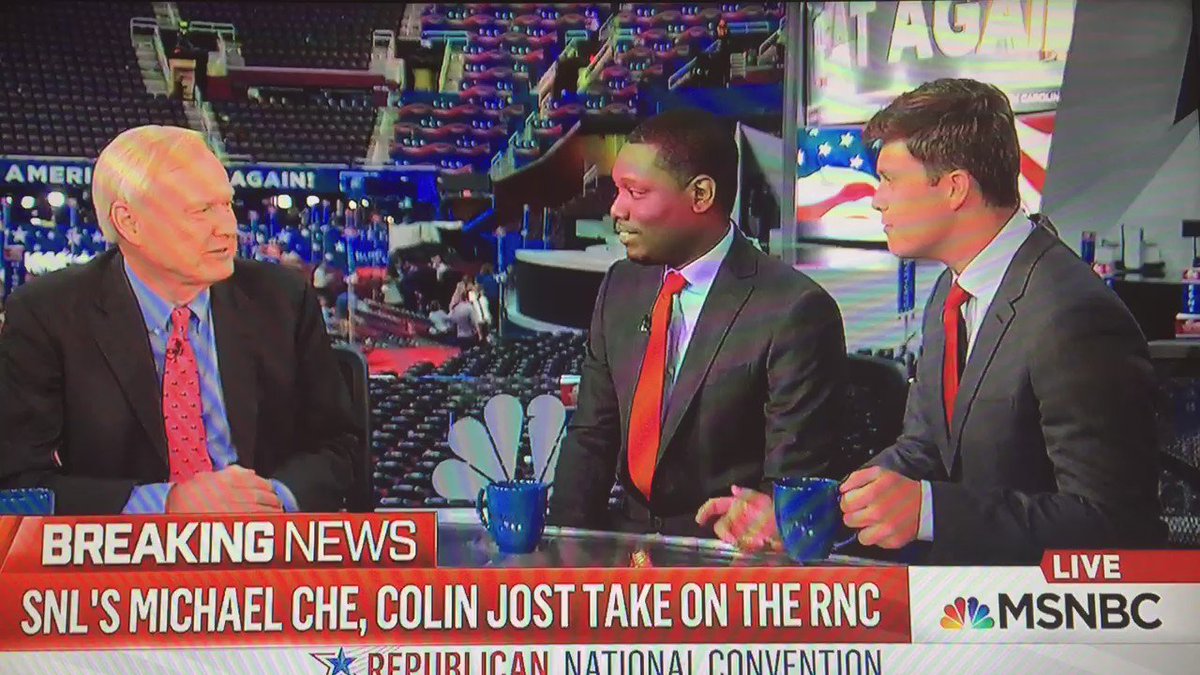 Matthews and Jost and the funniest black guy on the set

You were probably asleep. Late last night/early this a.m. on MSNBC, Colin Jost and Michael Che did a special RNC edition of  “Weekend Update.” Kate McKinnon also showed up as Ruth Bader Ginsburg.

Afterward, Che and Jost were on with host Chris Matthews, who came off as not being used to conversing with black people in casual, apolitical conversation. As if it were 1968, Matthews asks Che, “What do you think, funniest guy? Funniest black guy?” Watch how Jost just loses it.

Earlier, and I cannot find the video, Matthews actually looked at Che and said, “I have a theory about African-Americans…” to which Che replied, “I’m all ears.” Cant. Make. This. Stuff. Up.

Also, Che kept his cool throughout, though his eyes did roll once or twice.

5. FLOTUS Did Not Lip-Synch This

Like Seinfeld with POTUS last winter, the car never leaves the White House grounds. Also, you can see the Secret Service vehicle trailing them much of the time.

Where Do The Children Play

British singer/songwriter/legend Cat Stevens turns 69 today.This was the first track on Stevens’ classic 1970 album Tea For The Tillerman, which also includes “Father and Son,” “Miles From Nowhere,” “Wild World,” “On The Road To Findout,” and the title track, which was the theme that played at the end of every episode of Extras. This song also appeared in Harold and Maude. Stevens was absolutely prolific and had an incredible batting average (good songs/overall output) in the late Sixties/early Seventies. Darth Trump will speak this evening, as will his daughter Ivanka Trump (truly cool; once hung out with her in an after hours speakeasy in Alphabet City), PayPal founder Peter Thiel and pope-basher Jerry Falwell, Jr.Also recommend you catch Real Time with Bill Maher on YouTube at 11 p.m.