“What a drag it is getting old…” A Medium Happy 73rd to expecting dad Mick Jagger….

Michelle Obama‘s speech rocked the Wells Fargo Center in Philadelphia and demonstrated that under intense pressure and scrutiny for 7 1/2 years, she and her husband have never forfeited their grace, decency, fortitude, or love of country. Damn, girl. You’re simply the most supportive, toughest, smartest wife since Rod Tidwell’s wife, Marcee, in Jerry Maguire.

p.s. How many people can give a speech like that just one week after Carpool Karaoke’ing with James Corden and Missy “Misdemeanor” Elliott?

Less than 48 hours after the accident that claimed the lives of punters Mike Sadler and Sam Foltz, a columnist with the Baton Rouge Advocate pens a story about the crash’s lone survivor, LSU placekicker Colby Delahoussaye. He says the obligatory words about what a tragedy the crash was, but then later delves into the fact that “The team needs Delahoussaye desperately. It needs him to recover and be the consistent kicker he has been, because frankly LSU has no other proven choices on the eve of opening practice…”

The writer, Scott Rabalais, goes on to write, “LSU was a tragic car accident away from something going horribly wrong.”

I don’t think this pic is from last night, but love the image (Bernie wears khakis, of course he does)

The ovation that Bernie Sanders received before speaking last night, the final speaker on the first night of the DNC (unless Erin Moran or maybe Markie Mark were waiting in the wings) was such that I wondered if they were going to hoist his jersey to the rafters.

Bernie gave a rousing speech. Whether you agree or disagree with his policies, you have to admit that he’s passionate, that he’s genuine, and that he’s committed (or should be). A tweep with whom I often spar basically said, “Meh, he didn’t get his first job until he was 40, he’s a socialist and the town beatnik.” And I shot back, “You pretty much just described Jesus.”

And, unlike the GOP runner-up, Bernie did explicitly tell the delegates to vote for the presumptive nominee in his party.

Dems: “Come Together.” GOP: “Separate Ways.” The Beatles versus Journey.

Of course, the truth is that a lot of people supporting Trump aren’t buying the idea of togetherness, of diversity, of equality. And economically, Bernie notes that the top 1/10th of 1% control 85% of the nation’s wealth, and this still falls under “free market capitalism” to the hard-line GOP (while people earning the minimum wage can’t afford to do anything realistically more than rent and live alone). That’s not capitalism; that’s an oligarchy. The reason jobs are going away isn’t because workers at the bottom earn too much; it’s because the men at the top do (Gawd, I know I sound like a socialist here, but what rate of income disparity does one need before you finally see it?).

Basically, here’s the GOP game plan: Keep the richest 1% rich while preventing a replay of the French Revolution from the other 99%. How do you do that? Stoke fear and paranoia into their hearts, tell them their problems are being caused by people who don’t look or talk like them, and that “I alone” can save you from violence and terrorism. Play up the fact, massively, that 49 people were killed in Orlando and ignore the fact that 22 veterans a day commit suicide, victims of PTSD, victims of the horrors of a war we only fought to preserve big oil’s interests. *

*I’m John Walters, and I approved this message.

The second part of the GOP gameplan: Dispute facts with feelings. It’s indisputable that America is in far better shape now than it was eight years ago, after two terms of George Bush. So the GOP hardliners, such as Newt Gingrich, say, “But it feels worse, and that’s what matters to me.” John Oliver, per usual, brilliantly exposed this tactic on Sunday evening. Watch: 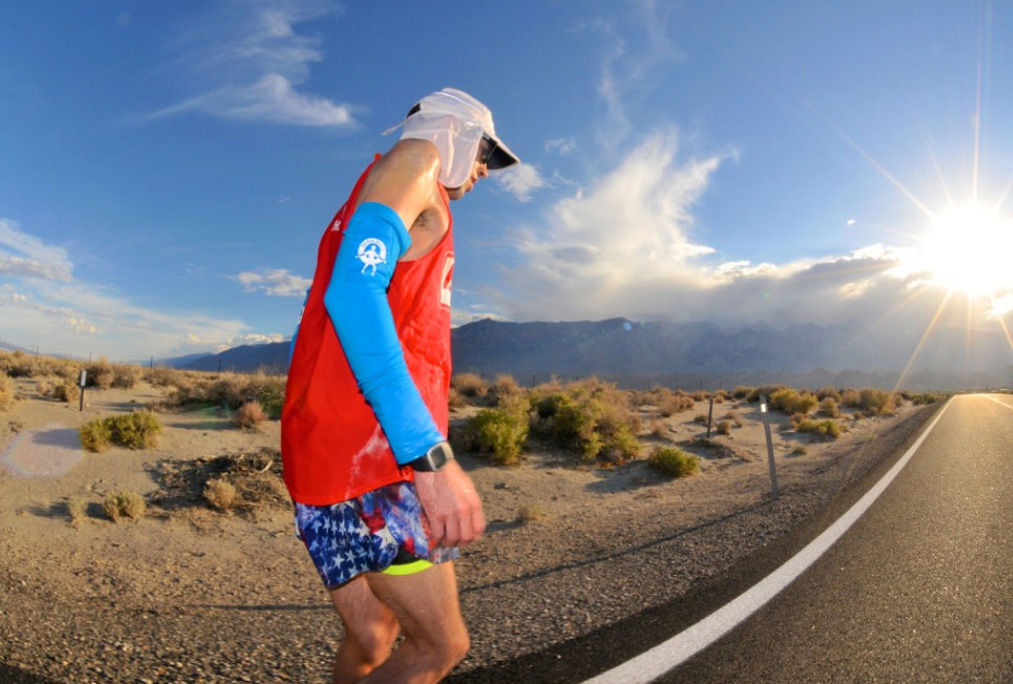 The results of last week’s Badwater Ultra 135, “the world’s toughest foot race,” from Furnace Creek, Calif.: 97 runners entered, 83 finished. Defending champ Pete Kostelnick of Lincoln, Neb., age 28, won in a time of 21:56, shaving more than an hour off the existing record in this, the 39th year of the race. That’s insane.

The top women’s finisher was Alyson Venti (not to be confused with Allison Tall or Allison Grande) of Miami, 34, who finished in 25:53, also a record.

The race begins at minus-280 feet of elevation, in Furnace Creek, Death Valley, and ends at the Mount Whitney Portal, elevation 8,300 feet. And it’s done in scorching hot temps that often exceed 115 degrees. It’s a masochist’s utopia.

I was in the green room at The Jimmy Kimmel Show in 2008 when Sarah Silverman surprised her then-boyfriend, the host, with “I’m ****ing Matt Damon.” And here all three were again eight years later on national TV last night.

Do You Believe In Love

A bar band from Marin County, Calif., Huey Lewis and the News burst onto the scene in the spring of 1982 with this irrepressibly uptempo love song. New wave ruled the roost and MTV at the time, but this irresistible boilerplate rocker and its handsome, weathered singer, overwhelmed those alt-nation goths in their raincoats and eyeliner. The song reached No. 7 on the Billboard charts, the entire album (Picture This) had radio-friendly hits, and the success helped the band land the soundtrack song for Back To The Future a couple years later.

Tonight’s speakers include former president and potential First Man (for the first time) Bill Clinton, followed by mothers of black men who died at the hands of police. I hope they mention how much more likely it was that their sons might have died by shark attack.