“The main thing about money, Bud, is that it makes you do things you don’t want to do.”

Naomi Bishop is a Wall Street success story, celebrated at a cocktail party for powerful women in New York City, where she admits confidently to the room “I like money.” She has few attachments: a neglected fish in her luxury apartment, and a sorta, no-strings-attached boyfriend. It’s all about the bucks. That’s the endgame.

Shouldn’t that be enough? Bishop, played by Breaking Bad’s Anna Gunn (who turns 48 today), would argue fuck yeah it should. At the start of the movie, Bishop is the center of the universe. The rest of the cast just orbit her like a life-giving star, absorbing her orders, holding a heavy bag for her to box with, and in the case of her protégé, Erin Manning, doing her bidding late into the night despite being denied a promotion past vice president.

The actress that plays Manning, Sarah Megan Thomas, married into the financial world, and as the co-writer/producer she clearly did her homework in that field, interviewing the real-life Bishops of Wall Street.  That research helped build a central character that probably spent her 20s in the Clinton ‘90s eating a lot of investment banker bullshit and spitting out money, beating the boys by a large margin while getting slightly ahead. Now, near the top of the food chain, Bishops’ day-to-day challenges feel authentic to us, as if we already knew this story all too well. The best of the money movies (Wall Street, The Big Short) make complex financial scenarios easy to understand, and so does this one. Bishop and Manning need to secure the big score.

But nothing is ever simple when a billion-dollar valuation is involved. Another start-up deal went wrong for Bishop recently, and she has been denied a global director job that she was clearly qualified for (“This is not your year,” her boss says, winning a gold medal for smugness). Plus the pissy, pretty-boy CEO of her most recent project, another tech start-up, is eyeballing Manning like a tasty treat.  And that sorta boyfriend? Currently under investigation by a prosecutor who’s also an old college buddy (Alysia Reiner, another co-writer/producer).

The film does a shrewd job of showing the lion-taming act women have to keep up in order succeed at the highest levels of the modern workplace. They can use their sexuality to get ahead, sure, but it can just as quickly be used against them. And while investment banking is a bottom line business, the women in this story must ask to be judged solely by that bottom line, and not the “perception” of their abilities and emotional states in the land of brandy and cigars and inside jokes. 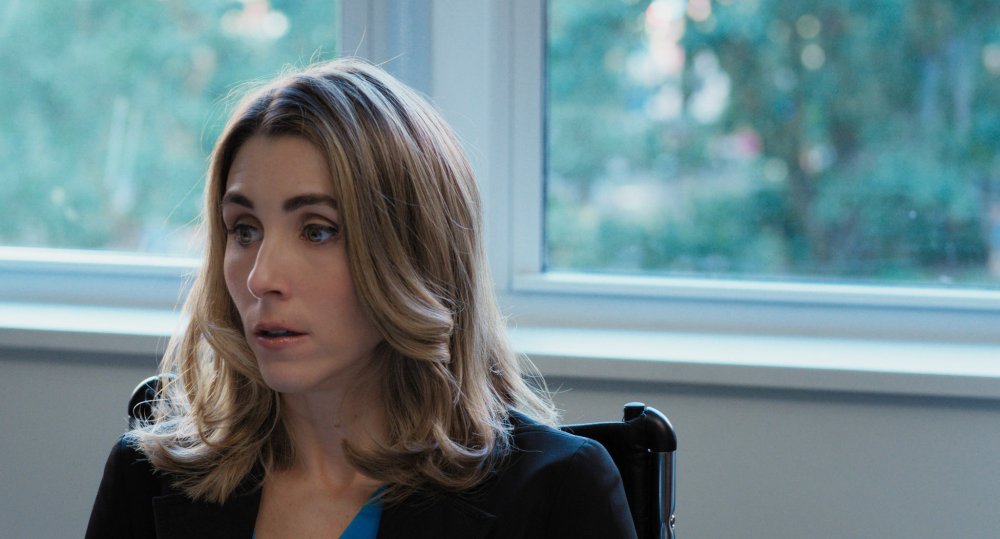 Yep, the film poses the question that keeps certain magazines on racks across America for the last 50 years … can women have it all?  Equity‘s answer, I felt, was yes, but in a tragic and most unexpected way. Just follow the money.

By the end of Act 2, right before the IPO, I began to wonder if the stakes on their own would have made Equity compelling if the Gunn character were a man – perhaps a world-beater like a 40-ish Michael Douglas, armed with a protégé of his own in the mold of a Miles Teller, who has a newly-pregnant sweetheart waiting late at night on the couch. The social media company that specializes in security is certainly timely (Snowden!), and the dance for any edge in a big money chess match is timeless. . The film was shot slickly too, panning across the necklines of beautiful creatures in sexy, dark lounges. I actually concluded, depressingly, that not only would a male-centric Equity get made, but the budget would’ve been bigger, to land a Douglas type, with a wide summer release.

But there was a glass ceiling here to be broken on several levels, and everyone gets bloodied from the shards of glass at the finish. Greed, for a lack of a better term, is gender-neutral. What a dick punch to the woman in charge.