A Medium Happy birthday to Cal Ripken, Jr., who has now been alive for 56 consecutive years

The epicenter of the quake was near the town of Norcia

A 6.2 magnitude earth quake rocked central Italy at around 3:36 a.m. local time. There are are at least three dozen dead. The Leaning Tower of Pisa? Still standing. You get it, right?

Is the Clinton Foundation dirty? I don’t know (okay, yeah, to a degree). A cursory investigation by Medium Happy’s crack investigative staff (my cat and I) found that 88% of the foundation’s money goes directly toward its charitable mission (source: Charity Watch) but when you’ve taken in $2 billion, that means that $240 million that did not go to charity. Which is kind of a lot of money.

The Foundation, which Bill Clinton launched in 1997—the same year that George Costanza launched the Human Fund with the tagline, “Money For People”—when he was in office, can certainly be seen as a quid pro quo for people of influence to have an express lane to the government’s top officials, such as our former Secretary of State. P.J. O’Rourke said it best months ago: “Hillary Clinton is the second-worst thing that could happen to America.”

3. How Come We Don’t Know The Colorado Rockies (And How Come They Kinda Stink?)

You wake up this morning to see that the Colorado Rockies (60-66) have the National League’s leading hitter (DJ LeMahieu, .344) and its leader in home runs and RBI (both Nolan Arenado, 33 and 107). And yet do you EVER hear their names on SportsCenter or just in general? Then there’s rookie Trevor “Toy” Story, who was leading the NL in home runs as a rookie before suffering a season-ending injury earlier this month.

Are the Rockies simply a “flyover team?” And is DJ LeMahieu the guy who brings his Mac laptop to parties with a killer EDM play list? Curiously enough, LeMahieu, a 6’4″ 2nd baseman who won a College World Series with LSU in 2009, was drafted by the Chicago Cubs and spent two years with them before being traded to Colorado.

We take this moment to remind you that the Colorado Rockies actually played in a World Series. I know: it sounds so strange to say, but it happened.

Matakevich moves from Philly to Pittsburgh

Former Temple linebacker Tyler Matakevich is undersized but he isn’t under-hearted (ooh, that’s good! I could be your friendly neighborhood sports columnist!). Matakevich was the most impressive defensive player (with the possible exception o a Clemson defensive lineman or two) I saw Notre Dame face last season (the Ohio State game doesn’t count; I don’t count games that kick off earlier than noon local time, especially on New Year’s Day) but because he is barely 6 feet tall and 230 pounds, he lasted until the 7th round of the NFL Draft, 246th overall.

Matakevich had four straight 100-tackle seasons at Temple and last season was the only player to lead his team in tackles every game. Plus, you never pass on linebackers with Slavic names (everyone knows that). The Steelers wisely selected him.

Now he’s being hailed as one of the best rookies in preseason. Watch some of his tackles (especially the first one, on a special teams play) here. He’s a keeper. He’s got that “Will somebody block that $#&@ guy!?!?” aspect to his game.

5. Where Have You Gone, Wink Martindale? 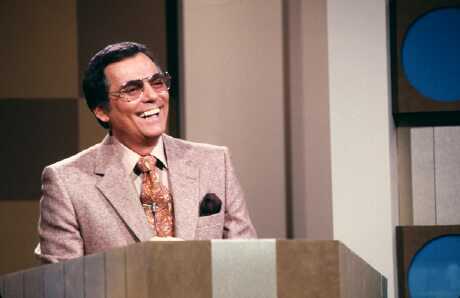 As host of the Hollwyood Squares, Peter Marshall had the act down cold (and he was the dad of Kansas City Royal first baseman Pete LaCock)

Last week in Deadspin Drew Magary had a typically hilarious and insightful piece about the Golden Age of Game Show Hosts and whether they are going extinct. He explained, and rightly so, that turning a comic into a game show host (Drew Carey, Steve Harvey) does not necessarily translate into good hosting.

The best game show hosts, the men of my youth, such as Peter Marshall, Wink Martindale, Bill Cullen, Gene Rayburn and Allen Ludden, knew how to banter with the celebs while making the contestants feel welcome. They were like Roger Sterling throwing a mid-afternoon cocktail party at the offices of Sterling, Cooper, Draper & Pryce.

Don’t Leave Me This Way

In 1977 disco balls hung from every ceiling,  and Thelma Houston‘s song was a smash. It hit No. 1 in April of that year. Houston (born Thelma Jackson; no relation to Whitney) disappeared from the charts as disco did, but…AAAAAAAAAAHHHHH, Baby!

No Country For Old Men

Call it. I remember taking my parents to see this movie on Christmas day when it came out. My dad was a tough audience, but even he liked it. This is Tommy Lee Jones’ best performance as a law man, and maybe his second-best (after Lonesome Dove) as a Texas-based character (he was a retired law man in that one). It won four Oscars, including Best Picture and Best Supporting Actor for Javier Bardem. Deserved every  one of ’em.