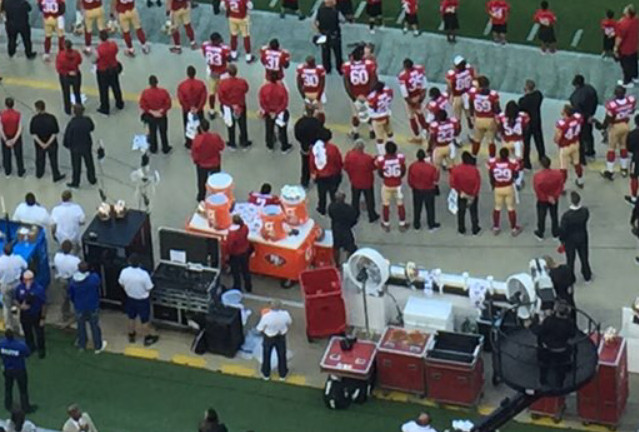 Kaepernick, flanked by Gatorade coolers, sits out the Star-Spangled Banner

“If You Don’t Stand For Something…”

The beauty of the First Amendment is that it allows for someone to express wholly unpopular, even outright unpatriotic, views. Which is what San Francisco 49er quarterback Colin Kaepernick has done all preseason—it’s just that last Friday was the first time in three games he was in uniform, so it’s the first time anyone appeared to notice that he was seated during the national anthem.

This is Hot Take gasoline. Perhaps the bigger question is how come we play the national anthem before sporting events (and not before films or theatrical performances). It’s funny  that this little Colintroversy is taking place just a few months before the Nov. 11 release of Billy Lynn’s Long Halftime Walk, a film that will have a lot to say about the conflation of the National Football League and patriotism.

2. Dak To The Future Tony Romo’s aching back is back. Romo, who has started the last nine Dallas Cowboy season openers at QB, suffered a transverse fracture in his back after taking a hit early in the Seattle exhibition game last week. So here comes Dak Prescott, the rookie out of Mississippi State, who is the NFL’s top-rated quarterback this preseason, having thrown for the most touchdowns (5) and the most yards (454) and having not thrown a single pick (curiously, Jimmy Garoppolo of New England is the No. 2-rated QB).

Speaking of New England, is a Bledsoe-Brady situation brewing in Big D? Prescott has some decent weapons at his disposal, such as potential Rookie of the Year running back Ezekiel Elliott, and Pro Bowlers Zack Martin (G), Dez Bryant (WR) and Jason Witten (TE). He’s stepping into a great situation, and the Cowboys don’t play a 2015 playoff team that won at least 10 games until Week 5 (Dallas was 4-12 last season).

3. The Other Gang of Eight 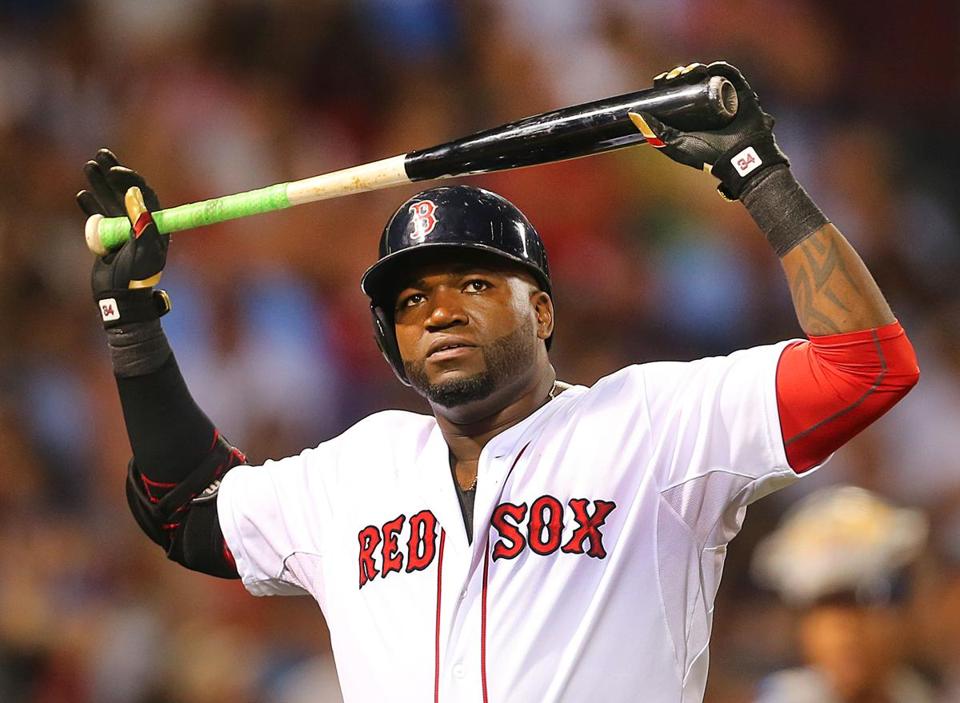 Big Papi is one of three Red Sox in the top five in hitting in the A.L. The mofongo can wait.

Someone will fade, someone will choke, and someone will play .667 ball in the month of September. We just don’t know who yet. The irony, at least for my Yankees, is that they didn’t need to trade both relievers Andrew Miller and Aroldis Chapman—or either of them—to field the team they have at the moment.

For the heck of it, I’ll pick Boston (best hitting team in A.L.) and K.C. (defending World Series champs, hottest team in August) to advance.

4. Does Gary Johnson Have A Shot?

Gary would become the third Johnson to be president, making it the most popular surname (goodbye, Adams, Bush, Cleveland and Roosevelt) in POTUS history

Former New Mexico governor Gary Johnson, a triathlete who is far fitter (and younger) than Hillary Clinton OR Donald Trump, appeared on Fox News on Sunday morning sounding like a serious presidential candidate. Johnson needs to be at a 15% minimum in five major polls to be allowed to participate in the upcoming presidential debates. Wouldn’t it be great to at least see a third person on that stage? 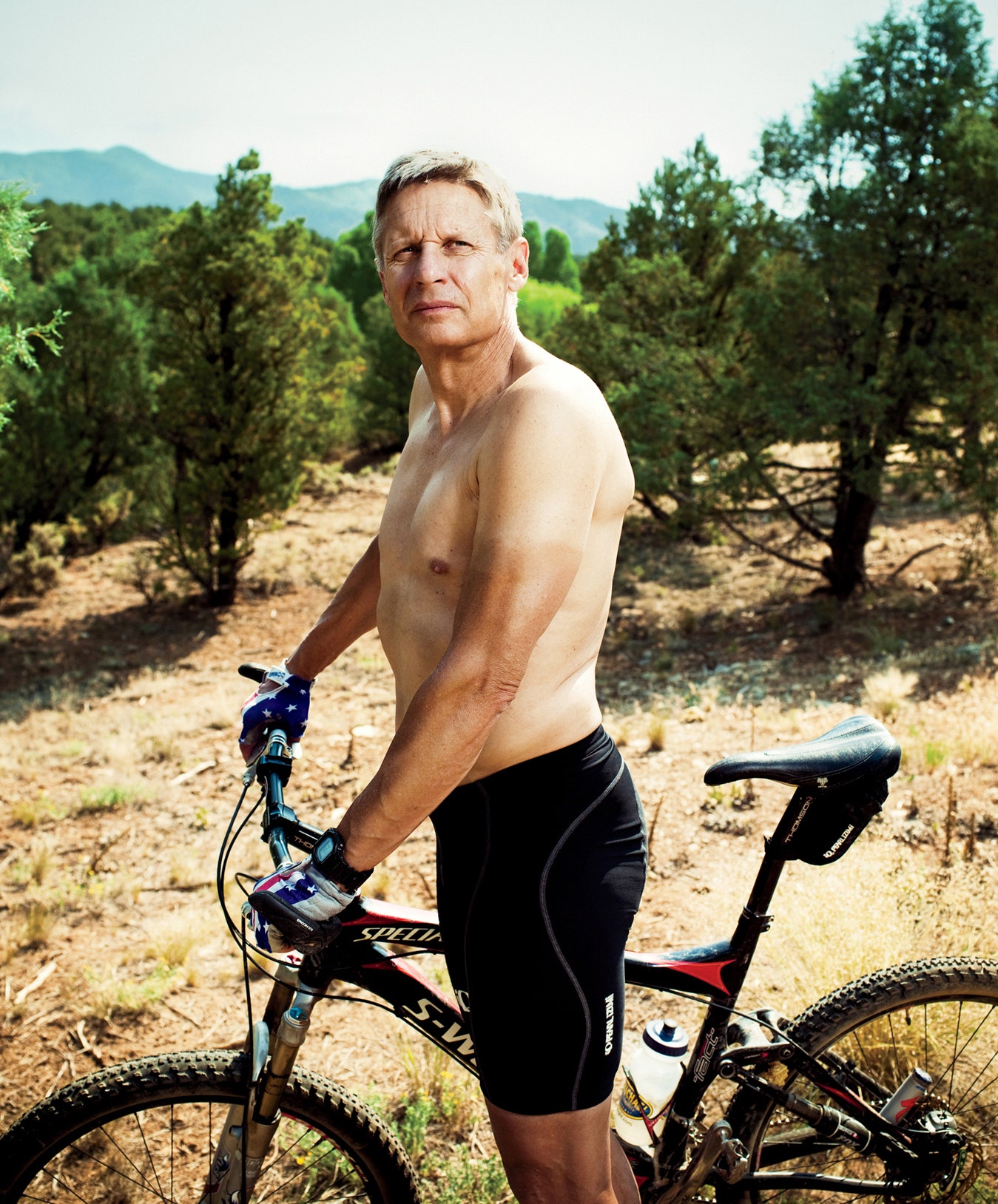 Johnson lives in Taos, N.M., in a home he built himself

Born on New Year’s Day, 19523, the 62 year-old Johnson has completed THREE Hawaii Ironmans and has reached every one of the Seven Summits (including Everest). Worth noting: the two previous Johnsons who took office did so as vice presidents who stepped in for assassinated presidents.

Earlier this year, when the Rams announced that they were moving from St. Louis to Los Angeles, I advocated for them to move instead to Montana and become the Billings Bighorns (I still believe it’s a great idea).

Well, Outside magazine just named Billings as the Top Place To Live in America in 2016. See?

Isn’t it ironic that the closing scene from The Night Of was a visual expression of the cardinal rule of Hollywood story-telling? Coincidence? We’ll have more on the finale tomorrow, but as a New Yorker I must ask why Raymond Halle was smart enough to not use EZ-Pass at the Queens Midtown Tunnel but too dumb to realize that if he’d taken the 59th Street Bridge, which has no toll, there’d be no video evidence of him leaving the city?

Does anything say mid-Eighties, post-New Wave synth pop quite like this summer ’87 hit from T’Pau? The vocalist is Carol Decker. The song reached No. 4 in 1987.

Actor Riz Ahmed (Naz from The Night Of) appears. I really hope they have him drive a taxi from West 87th and this time he learns where to legally make a left turn.