1. That dude in the cheesehead who taunts Aaron Rodgers at the end of the “Discount Double-check” ads? Turns out he’s a replacement ref. “Hey, Rodguhs! The replay official is not going to overturn it!”

2. Jon Gruden claims that Green Bay is 6,000 miles from Seattle (it’s about 1,934). Although if by “Green Bay” Gruden meant Hong Kong, then yeah, that sounds about right.

3. In the aftermath ESPN’s Linda Cohn refers to the NFL as the “best-run business in America”, then takes out her Blackberry to place a call for a new CD player on which to play her new CDs. (Apple, Linda?) Cohn also said that this play may turn out to be “the tip of the iceberg” in the replacement refs/NFL/union refs saga. Live TV ain’t easy.

That’s Shane Falco on your right, Clifford Franklin on your left.

4. The replay official, Howard Slavin, is a Los Angeles-based litigator (specializing in “Toxic Torts!”) who has been an NFL official since 1987. However, the manner in which the rules are written prohibited Slavin from overturning the call or even from flagging Golden Tate for P.I. Not that it was a big play or anything, just the single play that determined the outcome of the game. So, perhaps there’s a little room for common sense in the by-laws. What say you, counselor Slavin?

“You get so frustrated with incompetence that it leads to anger,” says ESPN’s Trent Dilfer in the immediate aftermath, as Cleveland Brown fans nod in agreement. Peter King tweets, “One of the great disgraces in NFL history“, which we presume is still somewhere below the Personal Seat License concept and the 1978 Tampa Bay Buccaneers. Green Bay Packer guard T.J. Lang was more succinct, tweeting simply, “Got (hosed) by the refs. Embarrassing. Thanks nfl.” You know what else is embarrassing, T.J.? Allowing your quarterback, the reigning NFL MVP, to be sacked eight times on national television.

The flag is with thee…

“It’s like putting a mustache on the Mona Lisa,” says Rick Reilly on the ESPN postgame set in reference to the replacement refs, a line that draws admiring nods from Dilfer, Steve Young and host Stuart Scott, who didn’t recognize it from this 2002 Reilly essay in SI.com or this 2009 column in ESPN the Magazine. You know, we get so frustrated with incompetence sometimes…

Seahawk coach Pete Carroll has now been on the winning end of both the Bush Push and the Fail Mary. Give Pete his due: When he writes a book entitled “Win Forever”, he ain’t kidding around. And blessed is the foot of Justin Tucker…

If only the Fail Mary were a lone miscarriage of justice for the NFL in prime time this weekend. Did Baltimore Raven kicker Justin Tucker’s last-second field goal clear the uprights on Sunday night? Have you seen it from this angle yet?

This was ESPN analyst John Clayton moments after the final verdict was announced. It’s difficult to blame him. It was a wacky play. Maybe there’s a larger issue here, though, besides the outcome of the contest — it’s the third week of the freakin’ season, after all. Did the refs get it wrong? It sure seems that way. Is that lamentable? Yes. On the other hand, we can look back and find multiple instances of either incompetence (Jim Joyce and the perfect game), malfeasance (the snow plow game in New England?) or outright corruption (Remember Tim Donaghy?) when fans and media reacted with far less bitterness, sanctimony and hostility. Maybe it’s just that it’s an election year. Maybe it’s the insufferable sanctimony and self-importance of “The National Football League” and those who discuss it on ESPN (Merrill Hoge, anyone?). Maybe it’s ESPN needing to fill a news cycle and our crippling addiction to Twitter. Maybe America is losing its sense of humor. Maybe you had money on the Packers.

We know this: Steve Sabol and NFL Films would have captured the moment with pitch-perfect tone.

And there were some funny tweets. Eric Hansen of the South Bend Tribune, who covered Tate in college, noted that it’s “Free Maple Bars for everyone at Top Pot Donuts” while Ralph D. Russo of the AP wrote, “Steve Young’s sanctimonious soliloquy about the greatness of all that is NFL kingdom is the reason why this mess is so damn enjoyable to me.”

Pray for us sinners, as these refs are out of their depth. Amen.

Forget the question of who caught the ball. Golden Tate’s offensive pass interference was ridiculously flagrant — it was so offensive that it was a fragrant foul — and that went completely uncalled. Kudos to ESPN’s Lisa Salters for asking Tate about the shove, to which he replied, “I don’t know what you’re talking about.”

Look at it this way: At least Golden Tate, Warrior didn’t teabag the Packers’ marching band after he scored. 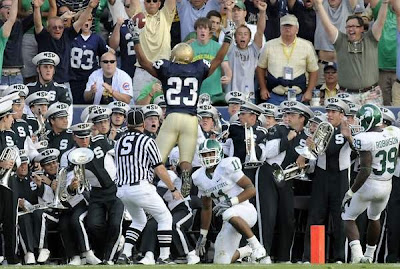