Great story, and I don’t know why I never heard this before this week: In 2004 a New Jersey billionaire real estate tycoon was arrested on tax evasion, witness tampering and illegal use of campaign funds. This same tycoon hired a prostitute to seduce his own brother-in-law, which she did, then sent the sex tape to her husband (his sister!) to keep her from being a witness against him in a civil interfamily suit.

Again, the year was 2004 and The Sopranos was in full bloom: this guy was just acting like Tony in real life.

Eventually, the tycoon goes to trail and federal prosecutor Chris Christie has him put away for a year. Here we should note that the tycoon was a major contributor to Democratic governor Jim McGreevey, who would resign in August of 2004 after announcing that he’d had an extramarital affair with a man. So here comes the future governor of New Jersey, a Republican, putting the screws to one of McGreevey’s major supporters.

Oh, and during the trial, though it wasn’t actually relevant, Christie made sure that the public knew about the ugly in-law hooker incident.

Christie: Cue, once again, the “Curb Your Enthusiasm” theme

That tycoon’s name is Charles Kushner. His son, who was 23 at the time of his arrest, is Jared Kushner. Over the weekend and on Monday, Chris Christie was dropped as the head of Donald Trump’s transition team and three men who are close to Christie and were thought to be shoo-ins for cabinet positions in the Trump White House—Mike Rogers, Rich Bagger and William Palatucci—either walked away or were told they were no longer welcome in what one source called “a Stalinesque purge.”

Jared Kushner has a long memory, and his father-in-law’s ear.

Meanwhile, in case you were wondering if we’re headed down a path, you should know that in 2007 Charles Kushner, a lawyer who was disbarred after this mess, bought a property not far from Trump Tower for $1.8 billion. Its address: 666 Fifth Avenue.

All class from Tony Romo yesterday—How ’bout that Cowboy!—in defusing a potentially volatile QB controversy in Dallas. Let the words speak for themselves:

One thing to consider: Romo still has that fire a burnin’ and he still wants to play. He’s going to be the backup on what is the best team in the NFL after having been the face of the team for more than a decade (13 years). He’ll ride out this rodeo, may even collect a Super Bowl ring, but don’t believe he’ll be watching from the sideline again next year. Romo, who will be 37 next season, has the best 4th-quarter passer rating of any NFL QB since 2006.

3. State of The Union 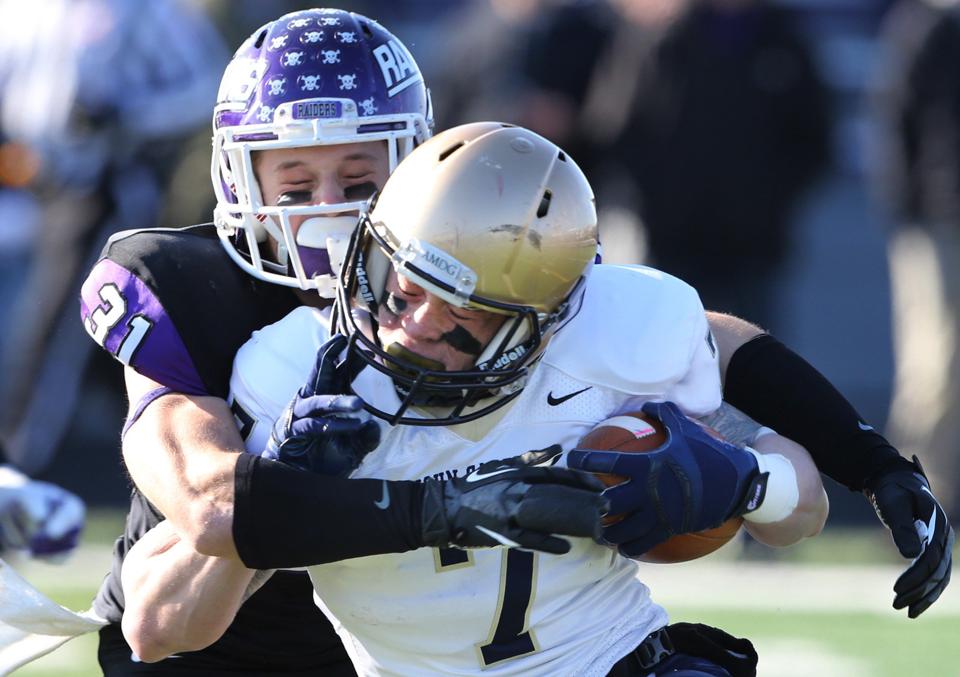 The game featured three lead changes in the final 6 minutes

Before last Saturday’s 31-28 loss at John Carroll, Division III Mount Union had not lost a regular-season contest since 2005. The defeat snapped an NCAA-record 112-game win streak and means that the Purple Raiders will need to play a true road playoff game this weekend—at Hobart—for the first time since 1996.

1996 was also the year in which John Carroll won their second of 12 national championships. To win their 13th, and return to the Stagg Bowl, they’ll likely have to play nothing but road games from here on out.

At 111 yards per game, Saquon Barkley is the Big Ten’s leading rusher

Four of the top eight teams in the country, according to the Playoff Selection Committee, reside in the Big Ten (and No. 15 USC would beat at least three of them). It’s way too early to worry about this (I can totally see Penn State losing to Michigan State), but you’ve got Ohio State and Michigan at Nos. 2 and 3, respectively, though if the Nittany Lions (No. 8) win out and the Buckeyes beat the Wolverines, neither OSU or UM would even advance to the B1G Championship Game. The Buckeyes have beaten four different teams, three of which were conference foes, by at least 58 points

Which is where it gets sticky. Assuming no upsets the final two weeks (a major assumption, by the way) and a Buckeye home win against the Khaki Kids, you’d have No. 7 Wisconsin versus No. 8 in the B1G title game. And would the winner of that game advance INSTEAD of Ohio State or in addition to Ohio State.

That’s the fun argument this week. Also, a reminder, that if Michigan wins out, with backup QB John O’Korn, it will render all this moot. My guess? Something unforeseen will happen to render all of this pearl-clutching unnecessary.

Finally saw Whiplash this weekend, and for all of the intense drumming scenes, as well as the martinet cruelty of Fletcher (J.K. Simmons, who deservedly won an Oscar), this dinner scene will stay with me longest. It’s something right out of Good Will Hunting. Crisp, fast, and funny. It’s like a tennis volley in which both players slowly approach the net and then it’s just quick back-and-forth, except that it’s four on one. Great stuff, if you’ve never seen it.

noun, “A member of a communist apparat, or political organization.” (has a derogatory connotation, or at least it did before a week ago)

Burning Down The House

The title comes from a Parliament-Funkadelic audience chant—Talking Heads drummer Chris Frantz had recently seen them play live at Madison Square Garden. The song and video were ubiquitous ( <–future “Word Up” term) in the summer of 1983, which was Peak MTV.  David Byrne & Co’s highest charting song, it reached No. 9 on the charts.

I saw this for the first time last winter, and it is a classic. This is the surfing doc on which all future travelogues were built. Remember that it’s late 1963 and early 1964. When these two surfers left the USA, John F. Kennedy was still president. And then they traveled to west Africa, South Africa, Australia and the Polynesian Islands. This was almost like going to the moon back then, which no one had yet done.