Castro is dead at 90

Stepping all over Florence Henderson’s moment in the sun, Cuban dictator Fidel Castro died on Saturday. He was 90. The former guerrilla leader took power on January 8, 1959 (just days after Michael and Fredo Corleone had fled on a plane to Miami) and ruled the island of 11 million with an iron fist as it languished economically via communist policies. 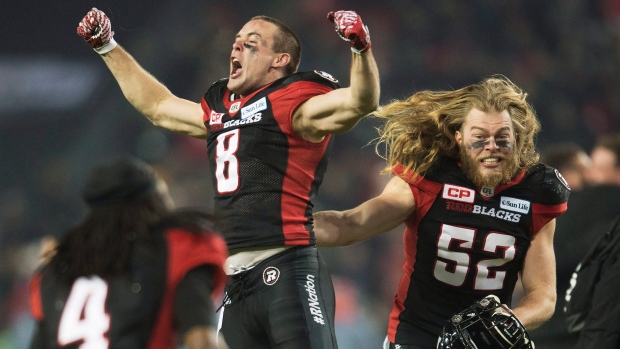 Calgary and Ottawa went into overtime at the 104th Grey Cup, but the Redblacks prevailed when 41 year-old quarterback Henry Burris (Temple grad) hit Ernest Jackson (Buffalo grad) on a post route for an 18-yard TD. Jackson bobbled it three times before securing the ball just as he crossed the goal line. For Ottawa, who finished the regular season 8-9-1 (Calgary was a league best 15-2), it was their first championship since 1976.

Burris completed 35 of 46 passes for 461 yards in the 39-3 win, even though he injured his knee in warmups and it was uncertain if he’d play. The trainer gave him a shot in the locker room just before kickoff to numb the pain. “They gave me some happy pills,” said Burris, a 17-year CFL veteran.

One big difference between the Grey Cup, which had 33,000-plus fans, and the Super Bowl. At game’s end they name a Top Canadian (Ottawa tight end Brad Sinopoli).

3. Raiders of The Lost Art (of Winning)* 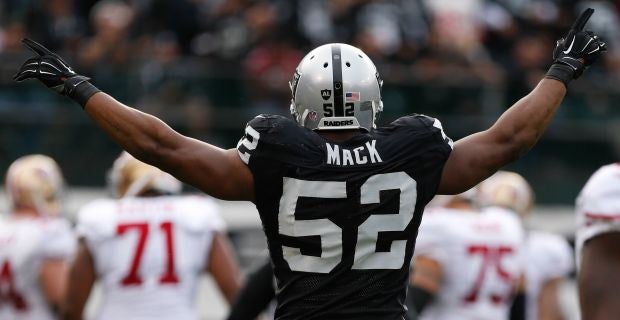 *The judges are cool with “Del Rio Grande”

With Sunday’s 35-32 defeat of the Carolina Panthers, the Silver & Black are 9-2. They’ve clinched their first winning record since 2002 (the year they lost in the Super Bowl to the Bucs) and became the second team this season (besides the Falcons) to defeat both Super Bowl teams from last February.

For years the Oakland Raiders bragged about “Commitment to Excellence” and that no other franchise had as good an all-time won-loss record. And that was true. But now they’re not even Top 10. It’s been a humbling 15 years, but with emerging stars such as QB Derek Carr and LB Khalil Mack, the team that wears the same uniform and plays in the same stadium as it did in its Seventies glory years looks as if it’s headed for a renaissance. 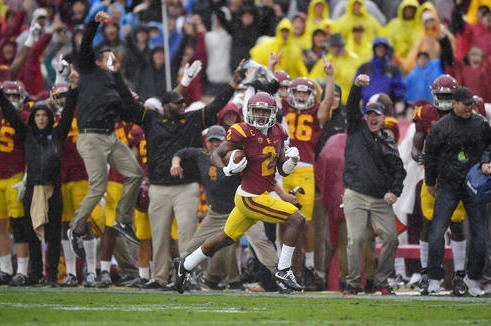 USC’s Adoree Jackson owned the Irish with a punt return, screen pass and kickoff return, all of which went for TDs and were longer than 50 yards

Donald Trump, who became famous for 3:30 a.m. tweets, has company: embattled Notre Dame coach Brian Kelly. After the Irish lost 45-27 at USC to end their sour season at 4-8, Yahoo! writer Pat Forde filed a story reporting that Kelly’s representatives were looking into other options. This after Kelly had definitively declared in the post-game presser that he’d return next season.

If you’re keeping score at home, both Kelly and Trump tweet around 3:30 a.m. Kelly just finished a week in which all of Notre Dame’s 2012 and 2013 wins (21 in all) were vacated, while Trump is now slightly concerned about a bigger win being vacated.

Friday’s and Saturday’s rivalry games were mostly anti-climactic, or just blowouts, save for one: Michigan at Ohio State, which went into overtime. With the Wolverines up 27-24 in the second overtime, the Buckeyes’ Curtis Samuel escaped a 10-yard loss (that would have put the ball on the 30 on 4th down, putting Urban Meyer in a pickle: try a 47-yard FG with a shaky kicker or go for it on 4th-and-15?) with some nifty reversal of field running to set up a 4th-and-1. On that play QB J.T. Barrett, barely, and I mean BARELY, pushed the ball to the 15-yard line for a first down (he landed at the 16). Like by the length of the pleat of a khaki.

On the next play Samuel ran around left tackle, the Wolverines over pursued, and he went in untouched for the win, the victory, and a highly likely playoff berth (with the added benefit of Ohio State NOT having to play this Saturday in Indianapolis). 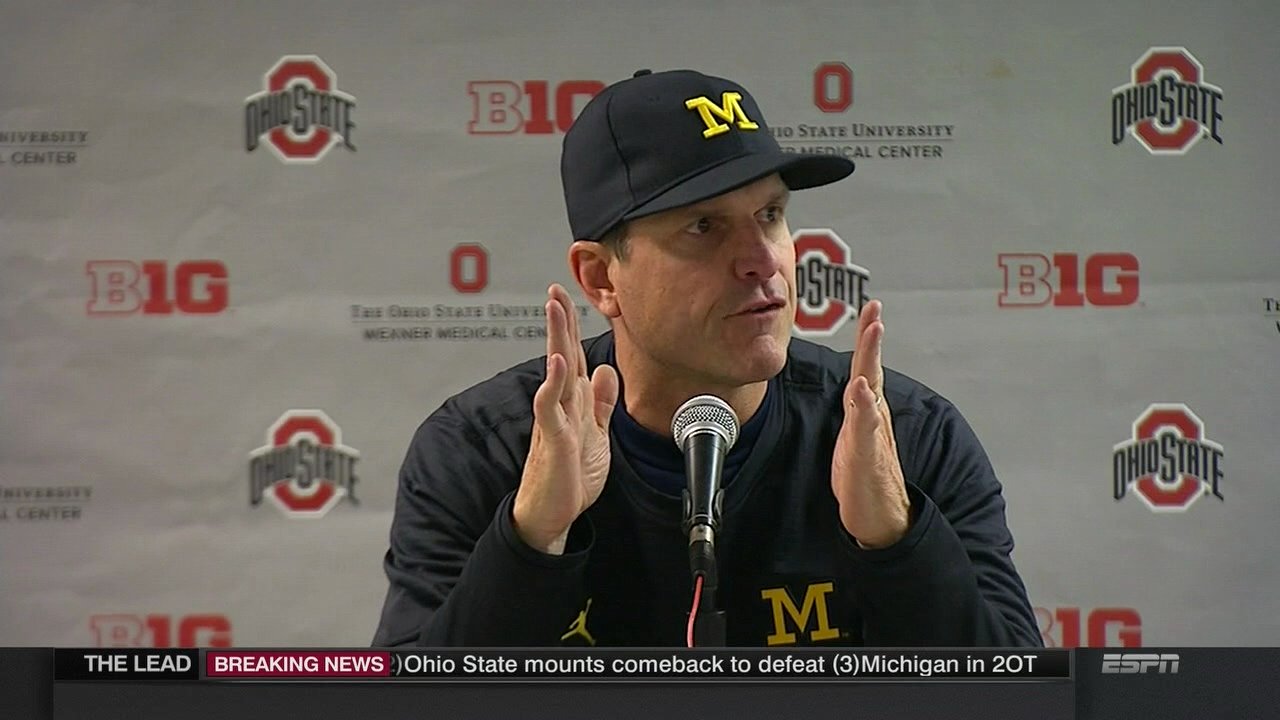 It was a lot closer than that, Jim.

The scantest of distances, inches really, and in overtime, separated a probable Michigan berth in the playoff from one for Ohio State. Jim Harbaugh complained in the post-game presser, repeatedly, that he was “bitterly disappointed” in the officiating (UM was flagged seven times; Ohio State, two) but that fourth down was too close to blame on the refs. Besides, Michigan returns to Ann Arbor cognizant that it went 1-2 in games outside the state of Michigan, its lone win being at Rutgers.

p.s. This was the most watched television game of the season, with nearly 13 million viewers, and it kicked off at noon.

Meanwhile, as Penn State waxed Michigan State 38-12, some fun angst is set up. The Nittany Lions, if they beat Wisconsin in the B1G, would be conference champs and own the head-to-head versus Ohio State. Those two factors purportedly matter to the SelCom. But unless U-Dub or Clemson lose, Penn State, with two losses to Ohio State’s one, will almost certainly be on the outside looking in. Then again, playing in the Rose Bowl is a decent consolation prize.

Like the band Talk Talk, whose hit single and debut album were also named “Talk Talk,” mid-Seventies British rockers Bad Company put a song on their eponymous debut album that was also eponymous. That’s Paul Rodgers, who also had a decent solo career in the early Eighties, with the searing vocals. Bad Company was managed by Led Zeppelin’s legendary manager, Peter Grant. The song never charted in the USA, though it is a staple of FM radio stations and can be found on juke boxes of reputable domestic dive bars. Also, if you pay close attention, the song uses the same progression as Joni Mitchell’s “Woodstock.” 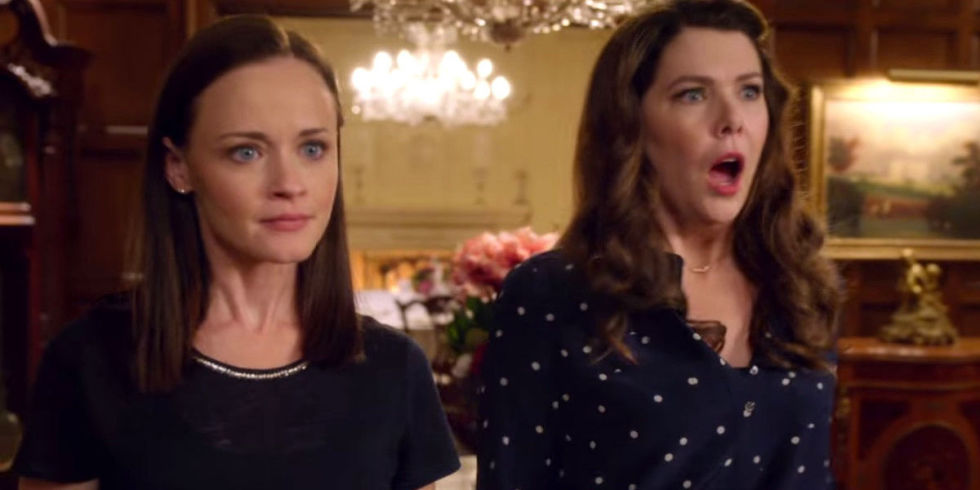 Emily Gilmore dropping a Llewyn Davis reference. Hep Alien covering Joe Jackson’s “I’m The Man.” Kirk dressed as Eraserhead. Luke giving out bogus WiFi passwords.  A town meeting in which it is pointed out that two episodes does not constitute an arc. It’s too good! I’m only two episodes through the four reunion episodes, but the Palladinos are showing no rust. If you were ever a fan, you’ll be pleasantly surprised at how seamless this reunion is nine years after they shipped Rory off on a bus to cover the 2008 election.