1. The Wisdom of Crowds

One day after Donald Trump‘s inauguration as our 45th president, nearly 3 million people peacefully assembled in Washington, D.C., New York City, Los Angeles, Chicago, Denver, Boston, St. Louis, Philadelphia, Phoenix, Atlanta and even Boise. There were similar marches (more like rallies; I spent three hours on 2nd Avenue between 49th and 48th Streets; we literally “took a stand”) in London, Paris and other parts of the globe. 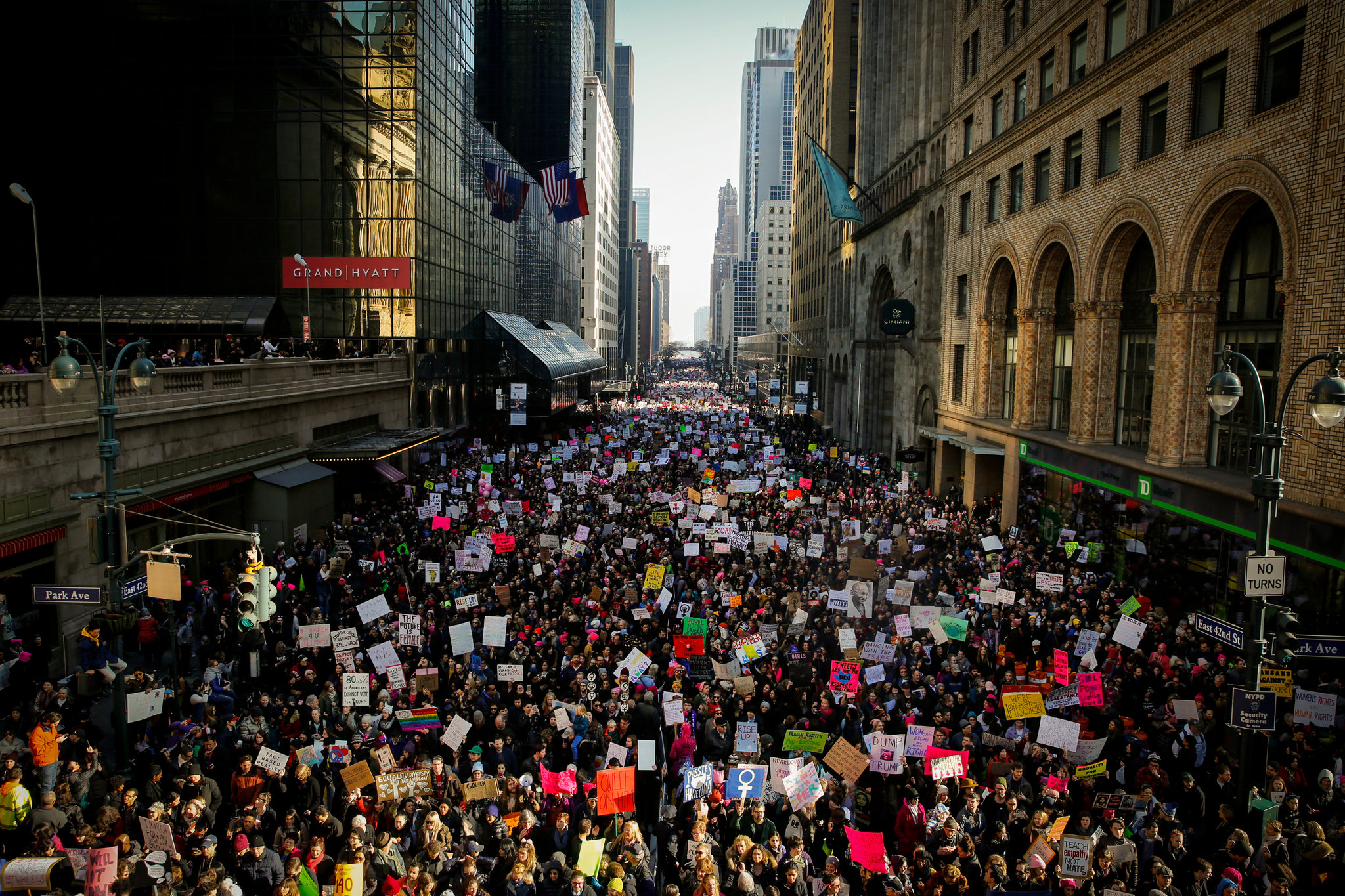 A University of Connecticut professor named Jeremy Pressman is keeping a running total of the crowd sizes in a Google Doc spreadsheet and estimated the crowd at 2.9 million, the largest ever protest in United States history. And if a guy named “Pressman” is not an experts on crowds, who would be? It’s like a library cop named Bookman. A mass protest in Paris!?! That’s nearly in Seine!

In Washington, D.C., an estimated 500,000 peaceful protesters marched without a single arrest (or punched-out Nazi). Of course, those numbers might have been different if Ricky Williams had chosen to join them.

Can’t a Heisman Trophy-winning brother even go out for a walk without the po po hassling him?

So what was it all about? A feminist guest on MSNBC’s show with Brian Williams got it 100% wrong when she said, “If it’s just an anti-Trump thing, it’s a missed opportunity.” No. Saturday wasn’t about finding tributary causes (pro-choice, equal pay, etc.), though those matter. Saturday was a call to arms (and legs) to stand up and be counted if you don’t agree with the direction in which this president and his cabinet seem intent on taking this republic. No more, no less.

Ashley Judd hit it out of the park here. Find Scarlett Johansson’s speech, too. She acquitted herself well. They could probably do without Madonna the next time. 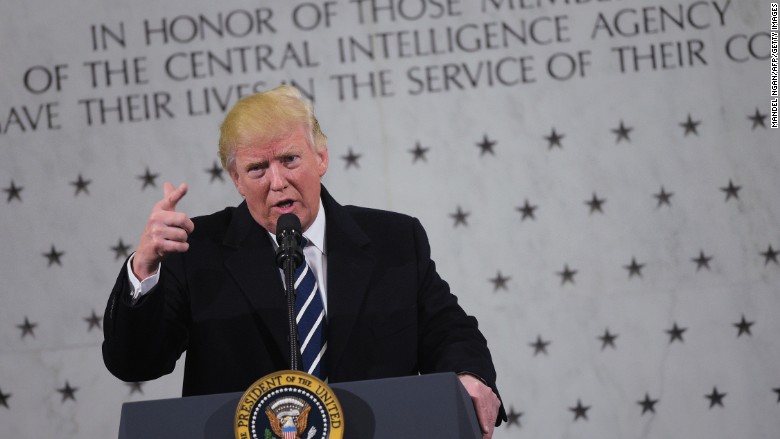 On Saturday Donald Trump crossed the Potomac into Langley, Virginia, to make the Central Intelligence Agency his first stop on his first full day as president. Standing in front of the Memorial Wall, whose 117 stars signify the sacrifices of agents who have lost their lives in service to the United States, Trump blathered on about:

–the media: “They are among the most dishonest human beings on earth” (only when discussing our bench press max)

–intelligence: (his, not the agency’s middle name): “Trust me, I’m like, a smart person” and ” Now, I know a lot about West Point. I’m a person that very strongly believes in academics.”

–support: “I am so behind you. You’re gonna get so much backing. Maybe you’re gonna say, please, don’t give us so much backing, Mr. President” and “There is nobody that feels stronger about the Intelligence Community and the CIA than Donald Trump. There’s Nobody. Nobody.”

I’ve never been more convinced than I am now that Donald Trump is a true danger to the Republic. https://t.co/ZtohQNGjgV

–as long as we’re here: “I wasn’t a fan of Iraq. I didn’t want to go into Iraq. But I will tell you. When we were in, we got out wrong. And I always said: “In addition to that, keep the oil. But, okay. Maybe we’ll have another chance.”

–crowd size at his inauguration: “The field was…. It looked like a million, a million and a half people.”

—Time magazine: “I have been on their cover like 14 or 15 times. I think we have the all time record in the history of Time magazine.” (Nope: Richard Nixon has it, but Donald will likely catch him)

–Truth (a.k.a. Non-alternative facts): “I love honesty. I like honest reporting.”

As Trump said all of this, he may have if he were so inclined, looked out to the opposite end of the building’s lobby. There he would have spotted a biblical verse from the Gospel according to John: “And ye shall know the truth and the truth shall make you free.”

You can’t make this stuff up.

Of the few Trump columns I read this past weekend, this one by a Republican, Pete Wehner, who worked in three GOP presidential administrations, felt the most insightful. 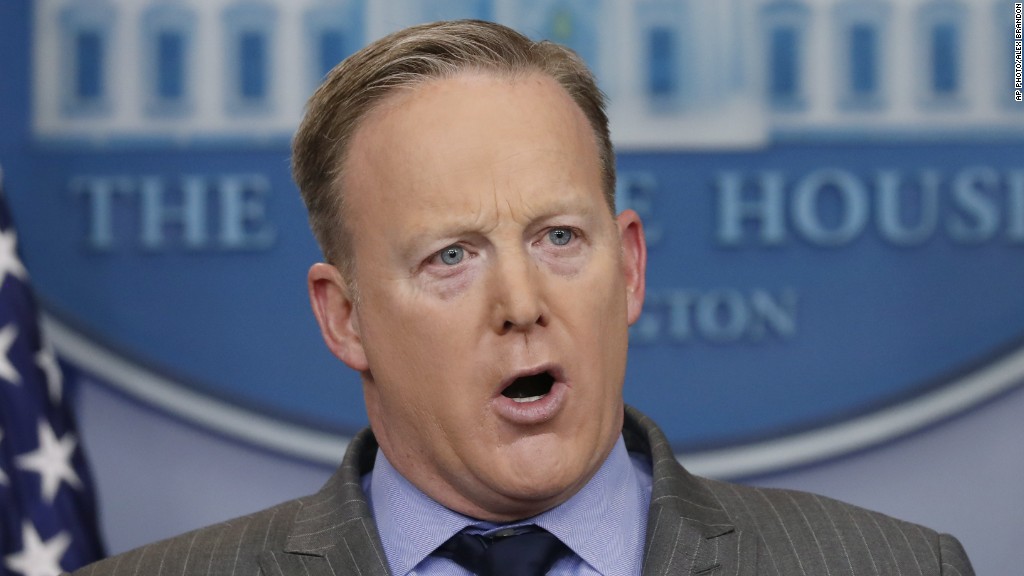 Spicer’s post-inauguration debut was simply a scolding of mean tweets.

A few hours later in the White House Briefing Room, the lies got bolder. White House press secretary Sean Spicer came out for the first time in that role since the inauguration and went gonzo Pinocchio.

Spicer: “This was the largest audience to ever witness an inauguration — PERIOD.”

These were simply inaccurate statements. The next morning a weary-looking Kellyanne Conway called them “alternative facts” in an interview with NBC’s Chuck Todd, who referred to them as “falsehoods.” Watch Kellyanne pause and look down, eyes closed, as if even she’s having trouble swallowing it.

Worrying about crowd size (or girth) one day into one’s presidency is inane, but what should sound off alarms is that the administration is willing to prevaricate over such a trivial matter when anyone with eyes can see the truth. On top of that, let’s remember that they chose to make this an issue on the same day that the largest single peaceful protest in American history took place.

Then again, maybe that was the point of it all. To take that off the top of everyone’s news feed.

Comedian Aziz Ansari was up to the challenge of hosting Saturday Night Live “the day after Donald Trump’s inauguration. His “lower-case kkk” monologue was as strong as Louis C.K.’s monologue a year or two ago, and his La La Land sketch was hilarious (loved the Black Mirror/Uber parody film, too). And if you missed Kate McKinnon just destroying Kellyanne, here it is (yes, the tribute to Obama at the end of the show was off-putting, but this show has never hidden its affection for 44; were you really that surprised?)

Coco is the niece of Kiki Vandeweghe and the granddaughter of a Miss America, Colleen Kay Hutchins

Down in Melbourne, both No. 1 seeds fell (how much farther can you fall when you’re that far down?) within hours of one another. Angela Kerber lost to “Team” Coco Vandeweghe while Andy Murray lost to Mischa Zverev. We still have a shot at the Williams sisters meeting and of Roger Federer taking an 18th Grand Slam singles title.

Another song from The Alarm, “The Stand,” might also have been apropos following the past few days. This early Eighties Welsh band fell under the New Wave umbrella, but they were really late-punk (their original name was “The Toilets”) who sounded a lot like U2 and Big Country. This song never even charted.

As you re-watch this gruesome classic, notice what a friend once shared with me: keep an eye on the different processes that Morgan Freeman and Brad Pitt use to find their assailant. Freeman is all about being methodical and using research; Pitt is far more impulsive. It’s what comes back to bite him, because Kevin Spacey sees the difference in the two men.