*The judges will also accept “Escape From Moo York” and “He Cud Go All The Way”, “Jamaica Run For It” 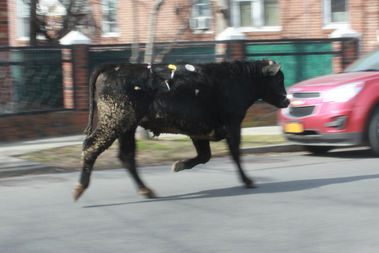 “Runaway cow, never going back/Not about to be product for Shake Shack,

Runaway cow, get away quick/Take Northern Blvd. to the on-ramp at Van Wyck”

Am I weird that the Runaway Cow story made me sad yesterday? Hey, I had a burger at J.G. Melon last Friday night, so that makes me something of a hypocrite (it’s difficult to be an idealist when burgers taste so good). This was a terrified animal running for its life with no real chance in an age of militarized police and overhead news copters. Also, we’re an increasingly scaredy-cat society that puts “keeping people safe” against real and more importantly, imagined dangers, above all else. I was rooting for you, Runaway Cow. And I’ll always admire your attempt: all any living creature really wants is to live free.

“Where’s the Kenyan manger where Obama was born?”

A dude whose entire grassroots movement was built on falsely accusing the first African-American president of being born in Africa suddenly cares about black people (and, as a two-fer, because who wants to walk all the way over to the Holocaust Museum, it’s so far? It’s next door? Oh, good to know….)? Ni**er, please.

Donald Trump, reading from a carefully worded script, never used the words “slavery” or “Holocaust.” He also had a big rally in Melbourne, Florida, on Saturday where he could have paid lip service to these same issues and took a hard pass.

Sorry. Not even close to buying it. You know what WAS real yesterday? This. Watch from 9:00 on. Chris Matthews kicks Ned Ryun’s ass here.

What’s going on? You’re so sick of your parents making you eat your vegetables and do your homework, so you go live with that fun-ass neighbor. Except after moving there you realize he doesn’t do laundry, doesn’t buy toilet paper, doesn’t buy milk or eggs and, well, it’s a heroin den. You assumed he’d be fun AND take care of the simple things you took for granted. Wrong.

Major League Baseball wants games to not eclipse 3 hours any more so as a stop gap measure (like saving a few hundred jobs at Carrier while ignoring the larger issues) it’s eliminating the intentional walk. Instead, a signal from the dugout will allow umps to direct the batter to first base.

Now, the IW isn’t my most hallowed baseball item, but I don’t like the spirit of this edict: In order to make baseball more palatable to the Snapchat generation, we’re going to eliminate things that make it baseball-y.

I’m kinda hoping pitchers defy this ruling by either pitching around hitters or plunking them in the side butt. Wanna make games shorter? First thing, allow no more than one tric to the mound in any game by a pitching coach or manager. And one more trip by a catcher. Two total. Any more and the batter takes his base. That’s number one…. There is no town of 500 or more people in the United States located farther west than Unalaska, Alaska. It’s more than halfway out on the chain of the Aleutian Islands, an 800-mile flight southwest of Anchorage. It’s also home to the state champion 2A basketball team. My story in Newsweek is here.

Let me take space here to thank school principal Jim Wilson, coach Kent Russell, deputy chief Jennifer Shockley, native Sharon Svarny-Livingston and a few others who helped with this piece. Unalaska is quite a noteworthy place. It’s the last piece of U.S. territory that was ever attacked by a foreign military power and it has been home to the Unangan, or Aleutian people, since the Stone Age. 4,500 people live on an island that is twice the size of Oahu

As isolated as this place is, the town and team are a model for what the United States should be. The starting five features two Filipinos, one Samoan, one half-Unangan, and one Caucasian. The top two reserves are Vietnamese. I hope you give the story a read.

Jeannie! Major Bellows is going to be furious!

*The judges will also accept, “I Scream of Jeannie” or “It’s not personal, it’s Showtime” and “Does This Buss Stop In Last Place?”

As my friend Chris Corbellini noted,

Jeanie Buss settled all family business. She may have sent Jim fishing in Tahoe for all we know: https://t.co/uvdibEYXxm

The fans will note that GM Mitch Kupchak (if you’re of a certain age, you instantly go to the movie Caddyshack when hearing that name) and designated Fredo (“I’m smart!”) Jim Buss are gone, but if you’re an old scribe you find it hard to believe they got rid of PR chieftain John Black, who’d been with the Lakers since the Showtime era. John Black (no, that’s not his spy name; that’s his real name) was as much a part of L.A. as the Hollywood sign. And the Hollyweed sign.

Hey, the Lakers have been awful for awhile and it’s going to take some time. Luke Walton is a good hire and while I really don’ t believe much in this current young nucleus (hell, the Suns probably have a better Under-25 nucleus), Jeannie had to do something. But haven’t we seen enough of Magic Johnson, on variety shows, as a studio analyst, as a coach, to know that there are two things he does well and neither of them involve being peripherally involved with basketball?

Eleven out of 10 people consider themselves too cool for Air Supply. I get it, but I love this song and have never hidden my unfettered love for Aussie schmaltz pop (hello, Little River Band). Go ahead and mock this flaccid rock group who met while performing in a production of Jesus Christ Superstar, but this 1980 hit is soft-rock perfection (unless you consider that an oxymoron, which, okay, I understand).

That two-day desert of horrid TV choices ends (so bad I almost found myself watching TV or worse, calling old friends). The last item on this list will feature a two-hour round table on The First Month of Trump featuring the MSNBC primetime hosts, and IMHO Rachel Maddow, Lawrence O’Donnell and Brian Williams have been better than anyone not named Jake Tapper since the election.