At the 89th Oscars, La La Land won Best Picture. Then it didn’t. Moonlight did. Putin’s all like, “Don’t look at me.” Finally, some actual fake news. Here’s the New York Times with the transcript of how it all unfolded.

Meanwhile, just another case of The Man trying to keep us down. The official explanation is that each side of the stage has a person holding every envelope for every award. There are two sets of envelopes. Apparently Leo entered from one side of the stage to present Emma Stone for Best Actress and then Bonnie & Clyde entered from the other to present Best Picture, and the person who handed them the envelope (either Brian Cullinan or Martha Ruiz) screwed up. And then you hand a red envelope that clearly reads “Best Actress” on it to a pair of septuagenarians who were too vain to bring their reading glasses onstage and voila (or Viola), this is what transpires.

(sorry about the language, but this pic, at the moment of realization, beats Ellen’s selfie pic from 2014; look at The Rock, at Ben, at Damon, at Casey. Great stuff.)

Biggest (known) gaffe in academy history, or at least since Shakespeare In Love beat Saving Private Ryan. And so, yeah, Emma Stone is involved with a bunch of hard-working  African-Americans being screwed and then redeemed. It was like The Help 2 up there.

The photo that launched the night’s best meme

Was it only a year ago that “Oscars So White” was trending? Three of the top five awards (Best Supporting Actor, Mahershala Ali; Best Actress, Viola Davis; and Best Picture) went to African-Americans and who knows, maybe Denzel Washington  beat Casey Affleck?

It’s funny, before the final moment, that cannot be forgotten, the show had been seamless and Jimmy Kimmel had done a wonderful job as host. His ongoing schtick with Matt Damon rose to new heights, hitting a zenith when he lampooned We Bought A Zoo as part of the inspiration package and then played him off stage as he was presenting. Sara Bareilles singing “Both Sides Now” should probably just be every year’s “In Memoriam.” Special props to John Cho and Leslie Mann, an unlikely pairing who were the funniest presenters. And Gary From Chicago didn’t seem overwhelmed at all by the moment. 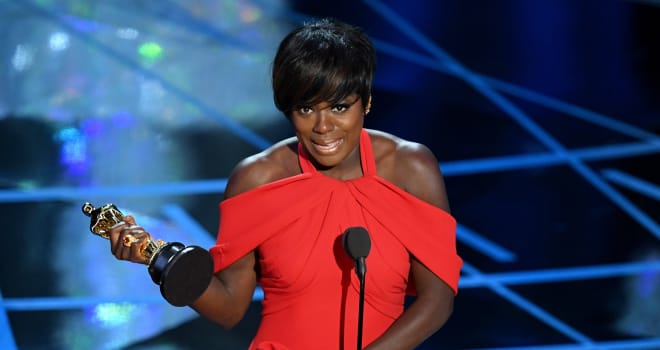 Viola Davis’s speech was its own August Wilson play

Here’s hoping Oscar invites Kimmel back, as well as Warren Beatty and Faye Dunaway, who don’t deserve any heat for the screwup, to present next year’s Best Picture. Oscar producers got it wrong; they didn’t.

3. Taking Out Stiles In Style

A humble 5’9″ lefty who is the greatest Husky never to play for Geno Auriemma, Plum now has 3,397 points. However, Plum’s feat was overshadowed when Baylor coach Kim Mulkey (confession: We’ve always adored this spitfire coach, right up until she opened her mouth on Sunday) won her 500th game on Sunday, and then stepped WAY DEEP in it when she decided to talk about Baylor’s massive sex abuse scandal. 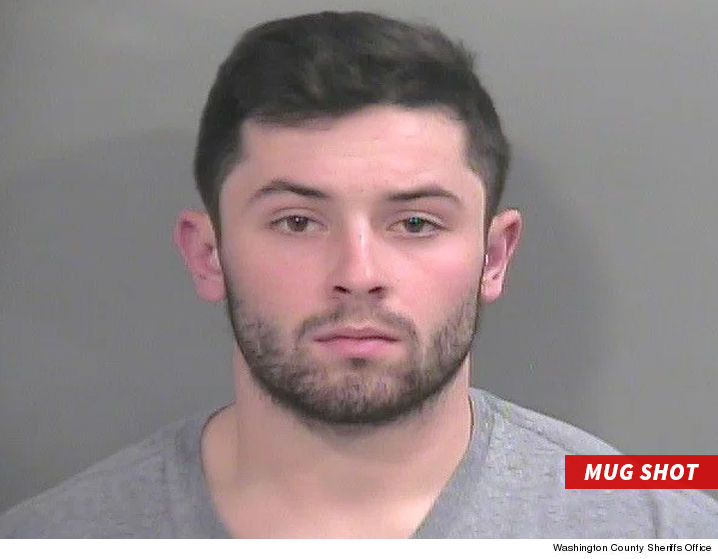 Does everyone in OU’s backfield get arrested?

Oklahoma quarterback Baker Mayfield waded into SEC territory (Arkansas) over the weekend and was arrested for public intoxication, disorderly conduct, fleeing the scene and resisting arrest but not for being covered in food. You have to imagine how drunk the famously on-field elusive Mayfield must have been to be chased down from behind and tackled by a cop. Somewhere Johnny Manziel is laughing.

Oklahoma visits Ohio State its SECOND game of next season, so expect Mayfield to get a ONE-GAME suspension.

Gonzaga has long been to college hoops what its fellow northwest USA neighbor Boise State has been to college football: a perennially dominant team in its class that always manages to lose one game late in the season that perhaps it shouldn’t have.

On Thursday the Zags won at the University of San Diego by 58 points to move to 29-0. Two nights later at home against BYU, a team they’d beaten on the road earlier this month, they headed into the half with a six-point lead. But the Cougars outscored Mark Few’s squad by 14 points after intermission to win 79-71 and end the Zags’ perfect season.

BYU helped its NCAA cause with the win, moving to 21-10. Cougar forward Eric Mika led all scorers with 29 points, none of them off three-pointers. He’s a modern-day unicorn.

Does Gonzaga still merit a No. 1 seed out West? Nope. I think it’ll go to UCLA, which beat Arizona in Tucson on Saturday night.

I was living in New Jersey in 1977 (and had never been west of Great Adventure in Jackson, N.J.) when this song and album were released. I don’t know how the rest of the country took to Billy Joel, but this album was every bit as big as Saturday Night Fever that year and Joel every bit as big as the Bee Gees. Joel is now the house band at Madison Square Garden, playing there once a month to packed houses. Meanwhile, his ex-wife is also aging well (this performance is from 1977 at Carnegie Hall).

Are the Tar Heels (23-5, 13-3 in the ACC) the best team in the nation? Or merely a No. 1 seed? Methinks if they win the ACC regular season title and at least advance to the conference final, they’ll be a No. 1 seed.