From The Snake to snake eyes. And, by the way, this is not the finger the Raiders are giving to their East Bay fans.

The Oakland Raiders are moving—again. That’s three times in the past 37 years. This time it’s to Las Vegas. I’ll have a Newsweek column on this to link here shortly.Viva Los Raiders! Napheesa Collier, one of two starters who was named a first team All-American on Monday, paced the Huskies with 28 points and 12 boards (though Geno told Holly Rowe during a break that she wasn’t playing defense)

*The judges will also accept “Huskiezzzzz” or “Husk Ease”

The Huskies down a decent Oregon team by 38 points to gain entry into yet another Final Four—their 10th consecutive Final Four, if you’re keeping score, and 18th overall under Geno Auriemma. You know me: I’m not a “UConn is bad for women’s basketball” guy. I just think what we have here is the case of a head coach who is two to three generations ahead of his peers.

On Monday night’s broadcast Kara Lawson, who is a pretty level-headed gal, repeated her assertion that she believes Connecticut, winners of 111 straight, will win 200 in a row. Barring injuries to at least two starters (something that happened the year I spent with them in 2000-01), I agree with her.

3. The Tomi Lahren Chronicles, a.k.a. “As Andy Warhol Checks His Watch”

Lahren will soon be running for a seat…at Soul Cycle

It seems like only yesterday—it practically was—when young, blonde and nubile Tomi Lahren was heralding the next wave of blonde Republican mouthpieces. Lahren, an anchor for some network called The Blaze, was appearing on The Daily Show and Real Time, and fielding compliments (and Lord knows what else) from afar from Donald Trump.

Then the 24 year-old UNLV grad appeared on The View and made the fatal mistake of being forthright. Lahren told the panel that she is pro-choice because it would be hypocritical to be in favor of limited government (which hard-line conservatives claim to be) and yet be in favor of the government messing around in our bedrooms (which hard-line conservatives love to do). “You know what?” Lahren said. “I’m for limited government, so stay out of my guns, and you can stay out of my body as well.”

Why do I get the feeling that Lahren will be covering the Red Sox for NESN soon?

Tomi, Tomi, Tomi. NEVER hit them with logic. What were you thinking? No, let me rephrase that: What?!? You were thinking?

Anyway, last week The Blaze suspended her show, Tomi. Then on Monday The New York Post reported that The Blaze had “permanently banned” Lahren from its air for voicing her opinion. The Blaze is a patriotic network that is here to defend The Constitution, even if it has to trample an employee’s First Amendment rights to do so (I know that they did not restrict her freedom to voice her opinion; it’s just funny that someone got fired and permanently banned for expressing an opinion by a network that claims to love The Constitution).

Not unlike Milo, Tomi is actually pretty bright and “libtards” who dismiss either of them simply because they defend, for example, Trump, do so at their own peril. LISTEN. Then judge. But what’s funny to me now is, I wonder what Lahren thinks of her party now that she’s seen the other end of that stick. You’re not allowed to disagree with any one of their platforms, even if your principles, values and intellect tell you otherwise. Disobedience is weakness. Loyalty is all.

WATCH: Kayleigh McEnany: Obama rushed off to golf after Daniel Pearl was beheaded.

Pearl was killed in 2002. Obama was a state senator. pic.twitter.com/5QkFRgjoR4

Now here is a blonde who should be permanently banned, from CNN. 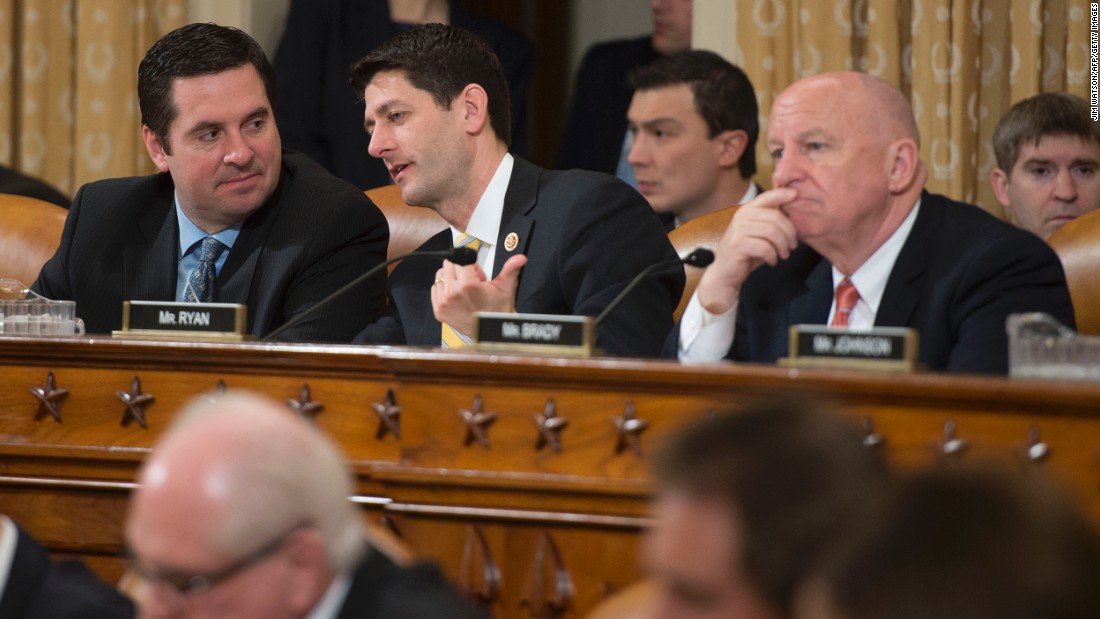 These two look like servers at the Steakateria where I worked, except the servers would be much smarter

Devin Nunes defending his potentially corrupt and inarguably incompetent handling of the House Intelligence Committee investigation of Trump and Russia by blasting his critics and saying, “It’s all politics here.” Dude, you’re in Washington, D.C.

Paul Ryan stubbornly refusing to surrender his good “Go ahead, neighbor, you can worry my lawn mower” facade as the president he has backed (after first not backing him) blames HIM for the repeal-and-replace rejection.

Sad! Meanwhile, watch this “A Closer Look” from last night if for no other reason than what Seth Meyers points out that Trump’s “Welp” face reminds you of the face a sitcom dad makes just before the closing credits roll (8:00 mark).

5. Baggy Pants and the Nitwit*

*The judges never thought they’d ever have the opportunity to name-drop this 1977 animated series.

Tucson goes Flori, Duh, as a prowler at Miles School on Friday attempted to make a dash and got caught by the baggy pants. Either that or this is the newest exercise in CrossFit. I dunno.

As we mentioned yesterday, today is the 25th anniversary of Christian Laettner’s shot. If you want to read an excellent story on that game, here’s one from one of the best writers whose byline ever appeared in Sports Illustrated, Alexander Wolff.

You know why this story is so outstanding? Reporting. Instead of just Hot-Taking his way through an event, Wolff talked to dozens of people to fashion a narrative. That’s journalism, kids.

Look! You get this fantastic Joan Armatrading song with the vintage MTV station identification promo. I didn’t become familiar with Armatrading until I heard her greatest hits album, Track Record, in 1990, but I wished I’d known about her when this single was released in 1983. Joan had some outstanding tunes (this one, “Call Me Names,” “When I Get It Right” and “The Weakness In Me”) and if she’d looked like Tina Turner or Whitney Houston, this Caribbean native would have been huge. She just happened to come along at the peak of MTV AND New Wave music. Bad timing. Earlier in the day (4:30 p.m.) on this same network there’s another Martin Scorcese film, The Departed, that won Best Picture and landed Scorcese his long overdue Best Director Oscar. But this 1990 film, which was nominated for both of those Oscars but won neither (thanks a lot, Kevin Costner: tatanka!), is far superior to both The Departed and Dances With Wolves. And I’d venture to say that without Goodfellas, maybe we never get The Sopranos, which launched the entire era of Peak TV.