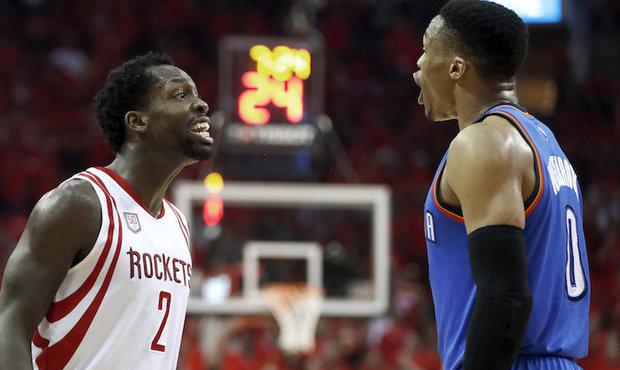 Russ got T’ed up for a yack fest with Patrick Beverley, too.

The Houston Rockets eliminate the OKC Thunder in five games, despite Russell Westbrook’s 47-point game in which he finished one assist shy of a triple double. For the series, Westbrook averaged 35 points, 12 rebounds and 11.3 assists per game. However, he also shot 25.8% from beyond the arc.

Houston versus San Antonio or Memphis next.

Epitaph on Russ’ historic year: He was magnificent, and while he may not be the NBA’s best player, he had the NBA’s best season. But he’s going to need help going forward and a lot of it. Victor Oladipo is a nice player, but he’s no second- or even third banana. If only Russ could get a team with guys like Kevin Durant and James Harden and Serge Ibaka. Oh, well.

Jim Miller, the dude who co-wrote Those Dudes Have All The Fun: Inside the World of ESPN, tweeted this morning:

John Skipper has just sent memo to all @espn employees. Layoffs announced today. Around 50 names you will recognize; another 50 you may not.

Having been laid off myself on the morning of a colleague’s wedding while at SI (Was I supposed to be the something blue?) and having to sit through the whole day keeping that to myself, I have tremendous empathy for these people. At the same time, most of them will develop a hard (harder?) outer shell that will only help them professionally in the years to follow.

No names yet and I won’t speculate. Kind of odd, though, considering how much emphasis ESPN puts on the NFL Draft, to do it one day beforehand.

*The judges will also accept “Miss Hissed” and “Fraulein Ivanka”

The first daughter appeared in Berlin yesterday and was jeered by the audience after she said that her dad has been “a tremendous champion of supporting families and enabling them to thrive.”

When the moderator, Miriam Meckel, asked her to react to that reaction, she calmly said, “I’ve certainly heard the criticism from the MEDIA,” who of course were not the ones booing.

The moderator also said, ““The German audience is not that familiar with the concept of a first daughter. I’d like to ask you, what is your role, and who are you representing, your father as president of the United States, the American people, or your business?”

Ivanka, who has been coached sooooo well, replied, “Certainly not the latter,” which displays a keen understanding of never using proper nouns in sound bites and also does that uniquely Trumpian thing of getting English language usage wrong, as “latter” can only  be used in a comparison of two items.

WATCH: Jesse Watters on Fox News re Ivanka Trump: “I really like how she was speaking into that microphone” pic.twitter.com/HoJHLpMtq1

She’s definitely his daughter, with the giant exception of that always cool (some would say icy) exterior. Meanwhile at Fox News, O’Reilly wannabe Jesse Watters made a crack implying that he thinks there’s one job he knows Ivanka could do well.

To Ivanka’s credit, she made no mentions in Berlin advocating the construction of a wall…

4. Could Marijuana SAVE The NFL?*

*The judges will also accept, “The Pot Thickens”

I was talking to a doctor who would know last night who told me about experiments currently being done with CBD (cannabadiol), which is the lesser-known chemical compound in the cannabis plant, which makes marijuana. Basically, and this is no big secret, both doctors and Phish fans know that CBD is able to “stop spasms, calm anxiety, and soothe those in chronic pain.”

And if you’ve spent any time around NFL players, you know how prevalent marijuana usage is, not as a facilitator to watching Seth Rogen films but as a pain reliever. Now comes the possibility that CBD may be the greatest weapon against long-term effects of concussions and CTE.

How funny and ironic would it be if the very drug against which the NFL has been so vigilant becomes the one that rescues The Shield from its CTE problem.

5. A Reason To Feel Good About The Coming Nuclear Holocaust

Great piece here in NatGeo.com about how, three decades following the Chernobyl nuclear disaster, animals rule there. Because no humans live there. So if a self-imposed genocide of mankind does happen, I’ve got that to look forward to and be happy about. Your mileage may vary (psst: this planet is way better off without us).

A few things you may not have known about British rocker Al Stewart, besides the fact that he is not related to Rod Stewart: 1) He played the first Glastonbury Festival in 1970, 2) He knew Yoko Ono before John Lennon did, though I don’t know what they mean by “know” and 3) he was the roommate in a London flat with a young Paul Simon.

Last September the extremely young and recently resurrected Yanks entered Fenway having won 8 of 11 and with a realistic shot at a wildcard slot, something that seemed ridiculous a month earlier. Then the Sawx swept them four straight after a 9th-inning gut-punch comeback on Thursday night. It’s a different year, and both teams are off to solid starts.