Why did Chris Cornell, lead singer of Soundgarden, hang himself after Wednesday night’s show in Detroit? No one knows for sure, but Cornell, 52, provided some clues during the show at the historic Fox Theater.

“I feel bad for the next city,” Cornell told the audience. And during the encore, he inserted lyrics from Led Zeppelins’ “In My Time of Dying” into the Soundgarden tune “Slaves and Bulldozers.” He knew. An hour or two later, Cornell was dead.

I invite you to put the earbuds in, tap the volume as high as it can possibly go, and taste the robust flavor of “My Wave” from the 1994 classic Superunknown.

And then there was the death of the Jabba the Hut of American media, Roger Ailes. The man who created the Fox News monolith, a man whom Matt Taibbi of Rolling Stone called “the Christopher Columbus of hate” died yesterday at the age of 77. Ailes once told an interviewer, “I created a TV network for people 55 to dead.”

Mission accomplished. And it’s nice to see you’ve reached the end of that sentence.

3. All Your Eggs In One Basquiat 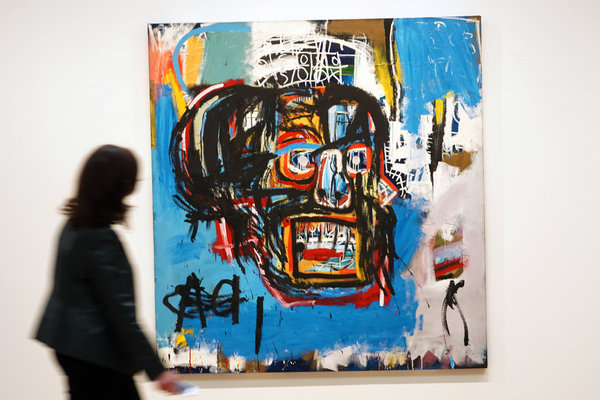 I once attended a party at the home of this man (as bloggers make for wonderful party guests) and overheard someone gush, “OH! You have a Basquiat!” I was certain it was probably some French toilet innovation. Turns out it was a painting by the Brooklyn-born artist Jean-Michel Basquiat, who died of a heroin overdose at the age of 27 in 1988. Last night the above painting by the neo-impressionist (of course I had to look that up) sold at auction for $110.5 million, the highest price that a piece by an American artist has ever fetched. It was purchased by a Japanese art collector and entrepreneur.

After nine seasons Bobby Moynihan will make his final appearance on Saturday Night Live tomorrow. In the last five years or so, his “Drunk Uncle” character (“You know what state I’m in? Denial.”) was the funniest recurring bit on “Weekend Update” outside of Kate McKinnon’s Russian peasant. Also, Moynihan co-wrote the David S. Pumpkins sketch, which goes down as a Top-10 all-timer. He’s headed to Hollywood, where he’ll co-star in a sitcom on CBS called “Me, Myself & I.”

*The judges will also accept, “This Is Your Majesty Speaking”

Well, this is rather disturbing. The King of the Netherlands, Willem-Alexander, recently revealed that he’d flown as a co-pilot on KLM (a.k.a. Royal Dutch Airlines) for two decades or so. The monarch, who flew twice monthly, did so to decompress. In the words of Tom Petty, “It’s good to be king.”

Sir Winston Churchill was a pilot, but he was never known to have flown commercially.

Germany’s top-tier league, the Bundesliga, has just installed its first female referee. Next season Bibiana Steinhaus, who looks as if she could play the role of a villainous femme fatale in a Bond film, will be doling out yellow and red cards to the likes of Arjen Robben and Thomas Lewandowski.

We’ve probably already run this song in this space, but it’s the tune that introduced its writer and co-lead singer, along with Eddie Vedder, to the MTV generation. A classic and the song that pretty much raised the curtain on grunge.

Two mega-stars in the twilights of their careers, Robert De Niro and Michelle Pfeiffer, portray Bernie and Ruth Madoff in this made-for-HBO production. Kids, Pfeiffer was the Charlize Theron of the 1980s and early ’90s. It’s kind of a nice book-ender for De Niro, who broke into the business playing NYC characters who knew how to make a buck the wrong way in both Mean Streets (Martin Scorcese) and The Godfather 2 (Francis Ford Coppola). Barry Levinson, another heavy hitter, directs here. Here’s the NYT review.

Or you could tune into Showtime Now and catch up on Billions.