Just before a NATO photo op, President Donald Trump realizes that AMERICA FIRST!!!!! is in peril and pulls a Frank Constanza on Montenegro prime minister Dusko Markovic, who seems to have recovered nicely from his underwhelming career with the Detroit Pistons. 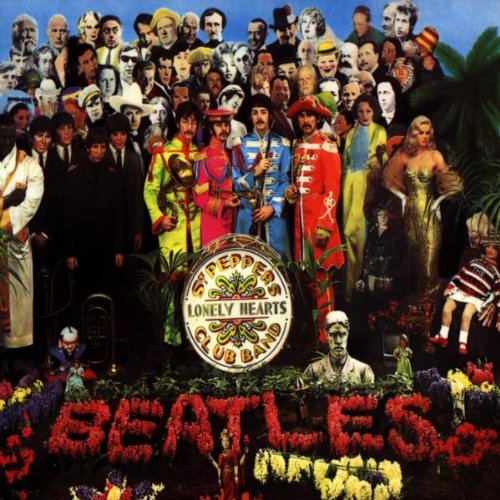 ….Sgt. Pepper taught the band to play. Yes, the album that Rolling Stone calls ” the most important rock & roll album ever made” and lists No. 1 on its “500 Greatest Albums” list turns 50 years old today. At Newsweek, we ranked all 13 songs, Zach Schoenfeld, Ryan Bort and I. For what it’s worth, my five favorite songs on it:

—A Day In the Life

—Lucy In The Sky With Diamonds

Two incredible facts you may not know: 1) As great as this rebuttal to Pet Sounds is (I mean, lots of music experts agree with Rolling Stone‘s assessment), it should have been even better. The first song that the Beatles wrote for it, Strawberry Fields Forever, their label, EMI, liked so much that they pressured the band to release it as a single while the band was still working on the album. The B-side? Penny Lane. Those two classics could have been, should have been, on this album but were not. 2) Paul McCartney wrote She’s Leaving Home after reading about a 17 year-old girl from a good family with good grades who had just vanished. Turns out the girl, Melanie Coe, had actually met the band as a teen dancer on Ready Steady Go! (the British American Bandstand) and at the time of the song’s release was hiding out at the home of her girlfriend who just happened to be married to legendary Deep Purple guitarist Ritchie Blackmore. And now you know…the rest of the story.

In one week Wonder Woman will make its world premiere and most likely be the top-grossing film of the weekend (the kids may be excited about Gal Godot in the lead role, but I’m all about Robin Wright as the age-appropriate aunt of Princess Diana).

But as far as ranking Amazons, I’ll take the company over the princess from DC Comics fame. Yesterday shares of Amazon (AMZN) were up nearly 2% as the stock reached an all-time high of $998. The $1,000 mark could be eclipsed today…not bad for a company that celebrated the 20th anniversary of its IPO 11 days ago, when the stock first sold for $18 per share. In 2004 General Electric had the world’s largest market cap and Amazon was not in the top 10. Today Amazon is ranked 4th in market cap (behind Apple, Google and Microsoft) and has almost double GE’s maket cap.

Amazon is on its way to ruling (or ruining) the world. Either way, you should own it.

4. LeBron Beats Celtics, Hot Takers Anxious To Declare Him Better Than Jordan While Leaving Wilt Chamberlain and Kareem Abdul-Jabbar Out Of The Conversation Entirely James is taking his team to a seventh consecutive NBA Finals, which Jordan never did. Jordan’s teams went 6-0 in the Finals, and never even needed a seventh game. James’s teams are 3-3 in the NBA Finals.

James has scored more points in the postseason than Jordan, thanks to last night’s 35-point effort. He now has 5,995 to MJ’s 5,987. But then again, it took LBJ 33 more games to do so. If you go by scoring average in the playoffs, Jordan remains the all-time leader (33.45 points per game) while LBJ is fifth at 28.28 ppg.

For me it comes down to how many time MJ made crucial plays, especially buckets, in the final minute of a game. He did it OVER and OVER and OVER again, from UNC to “The Shot” versus Craig Ehlo to his final bucket in a Chicago Bulls uniform over Bryon Russell. But I like to think we’re all self-aware enough to recognize that most fans under 40 are going to go with LeBron and most over 40 are going with Jordan. It’s who was the stud during your 20s and maybe 30s that you identify with most.

Not taking away a single thing from LBJ, but if forced to choose, for me, it’s no contest: Michael.

Kudos, for the most part, to newly elected Montana congressman Greg Gianforte for his apology after winning his seat in the House last night. He took responsibility for his actions the previous night against both Ben Jacobs and the Fox News team. But a few things that we shouldn’t forget:

They smile at your face/All the time they wanna take your place….

This album of the same name by the Philly soul group The O’Jays ended with all-time great tune “Love Train,” but this track, the title track, shot to No. 1 in September of 1972. The group had been together 14 years before they finally hit it big with these two songs. When I was a kid, this was actually one of the biggest sports events of the year. Top five? Top three? Times have changed, but it’s still a cool event. Your mileage may vary. Seven different former winners will take the starting line, as will Formula One god Fernando Alonso. The pace car driver? Negan, from The Walking Dead.