Hobby Lobby Gets Robby With Hammurabi

The evangelical Christians who run Hobby Lobby must forfeit 5,500 artifacts that were smuggled out of Iraq and they must also pay a $3 million fine (light) after prosecutors went after them. Turns out that they bought thousands of artifacts on the black market (you know who sells Middle East antiquities on the black market to raise money for their cause? ISIS) and had them shipped stateside labeled as “tiles.”

They really showed bad cuneiform on this one. If it’s sports figures in the nude creatively hiding their genitals and nipples, then it MUST be the ESPN Body Issue. That’s Joe Thornton and Brent Burns of the San Jose Sharks, above, and we could have suggested a more inspired way to hide their packages based on those beards. This shot of Caroline Wozniacki is one of the best this series has ever produced, if not the best.

In Hamburg, Germany, protesters dress as zombies in advance of the G20 summit (nothing draws protesters quite like the G20; the G19, not so much, but the G20, hoo boy!). When your international economic protest outdoes Comic-Con, you’re on to something.

4. The World’s Most Expensive Wheels This is the Bugatti from Chiron. The car, assembled in France, has a top speed of 261 m.p.h. and sells for just under $3,000,000. Only 500 exist and more than half have already been sold. The nice thing about this two-door coupe is that it fits snugly on the back of your yacht. 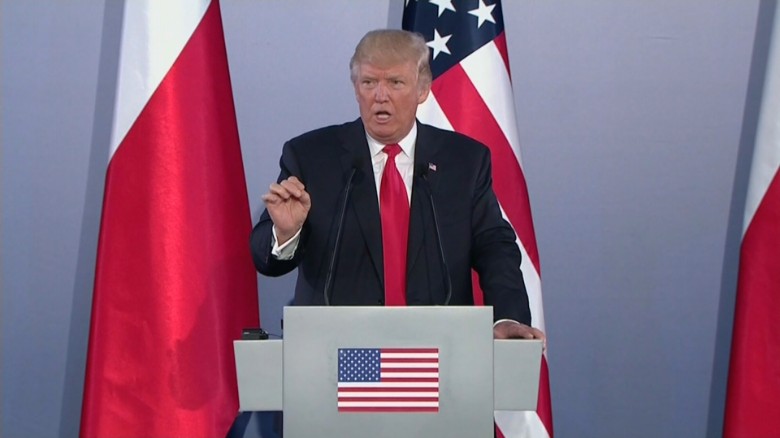 Speaking in Poland, President Trump, an absolute master of polarization, cast the West against Muslims (let’s be frank) by saying that the fight against “radical Islamic terrorism” is about “protecting our civilization and our way of life” (that way being multiple pieces of chocolate cake after dinner and more rounds of golf than visits with our 11 year-old son, one presumes).

He then said, ““I am here today not just to visit an old ally (Poland), but to hold it up as an example for others who seek freedom and who wish to summon the courage and the will to defend our civilization.”

You know, I had the courage and the will to defend our civilization, but then on four different occasions I found a doctor who told me I had shin splints and/or bad feet, something I thought about as I was teeing off from one of my golf courses.

Here’s the thing: Opioids will kill more Americans THIS YEAR than ISIS and Al Qaeda has ALL OVER THE PLANET in the past five. This isn’t about reality. This is about sewing fear in the minds of gullible Americans, which will help to keep the War Machine going as well as the GOP machine. It’s a con, people.

Does that mean there aren’t Jihadists who fervently hope for “Death To America?” Sure, there are. There are also gila monsters who will latch on to your limb and chew their poison into your flesh and you cannot get them off you unless you cut off their heads. Scary, right? But not an every day problem. Sorry.

I’d wager that in the summer of 1981 Phoenix radio stations KDKB and KUPD put no song on heavier rotation than this rocker from Long Island natives Blue Oyster Cult. The song hit No. 1 on Billboard’s Rock Tracks list. Note: no cowbell on this one.

An inexperienced person; a beginner