August and Everything After Edition

When the truth hits your eye like a big pizza pie

When u make your own warts using dopes like Art Schwartz

Don’t you open up and mope, you vile, profane dope,

The Mooch is out! He lasted less than four full days as the White House Communications Director. John Kelly, the new White House Chief of Staff, shitcanned the dude who forced Kelly’s predecessor to be shitcanned. The Worst Wing 30 for 30 will wind up being 18 hours long. 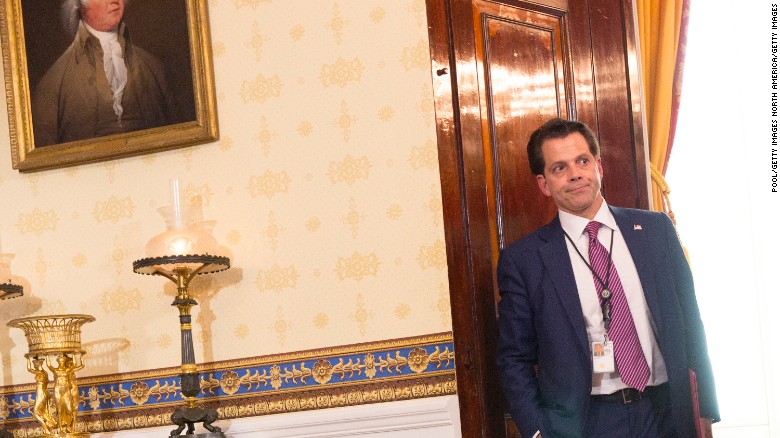 Mooch will presumably return to his old job of playing the villain in cheesy 1980s films set in NYC….

The world’s longest pedestrian suspension bridge just opened in Randa, Switzerland. The bridge, located in the southern Alps, spans 1621 feet (about 540 yards) and is at most points 300 feet above terra firma. Don’t you love when life becomes more like Lord of the Rings?

The bridge is slightly more than 2 feet wide and its grated surface makes it possible to look down beneath your feet. I’m just wondering how many dudes have already peed off it. Okay, and maybe how they built it.

On what would have been Jose Fernandez’s 25th birthday, the Miami Marlins hosted the Washington Nationals. Gio Gonzalez, a Miami native, fellow Cuban-American and good friend of the late Marlins ace, took the mound for the Nats…and threw eight no-hit innings.

Dee Gordon led off the ninth with a clean single to center and Gonzalez walked off to cheers from the home crowd and from the Marlins’ dugout. The Nats won 1-0.

4. If This Is True, Is THIS Enough For Impeachment? Rule No. 1 for Donald Trump, as I’ve said before, is, “Believe the opposite of everything he says.” So when he blasts the media for creating Fake News, as he does often, why would you be surprised that he is the one creating Fake News?

That’s what a lawsuit alleges, and then some. From The Daily Beast:

Rod Wheeler, the private investigator cited by Fox News for its retracted report claiming former DNC staffer Seth Rich was murdered for leaking emails to WikiLeaks, has now sued the network, claiming they: 1) Fabricated quotes from him to make the false connection; 2) Sent an article draft to the White House for review; and 3) Took orders directly from Trump to establish a connection between the DNC and Rich’s murder “to help lift the cloud of the Russia investigation.”

The question becomes when this suit would ever go to court. Also, because it’s not a criminal trial, what impact would such a trial even have? And wouldn’t Fox News simply attempt to settle? Is this yet another NothingBurger that is actually a SomethingBurger that nevertheless leaves your appetite unsated?

If you want to read more about the details here on Wheeler and the money maestro behind the scenes, Dallas-based Ed Butowsky, NPR has a detailed story.

Actor, playwright and all-around laconic handsome man Sam Shepard passed yesterday at the age of 73. Shepard wrote more than 50 plays, winning the Pulitzer for Buried Child, and appeared in more than 50 films, including The Right Stuff and The Notebook. He also had a long and tumultuous love affair with Jessica Lange, who was a knockout in her day (and still is). Do you believe in angels? Because I think I encountered one recently.

So I’m trying to take up golf (now that I’m an AARP member) and really haven’t played at all since junior high school, and even then not so much. Recently I was on a driving range, scuffing worm burners right and left. And all the other dudes in the lineup looked like captains of industry or CEOs or CFOs or…you know the type.

And then suddenly, out of nowhere, a short, schlubby, poorly dressed man who appeared to be in his mid-sixties stood behind me. “You’ve inverted your pivot!” he proclaimed, doing so in such a way as not to offend or upset me. There was no judgment in the comment, simply observation. He introduced himself as Frank and with a very brief motion explained to me that I needed to think of my swing more in the manner of a second baseman turning a double play. He swung his hips and moved his body in a far more horizontal manner that I had been doing.

I tried Frank’s way. The next ball I struck, to use a Dan Jenkins term, was dead solid perfect. Frank changed everything. I don’t know if I’ll ever see him again. I don’t know if he actually exists in the spatio-temporal world. All I know is that he changed my entire day, if not more.

Whenever you have the chance, be someone’s angel.

Few pop stars benefited from the advent of the MTV more than Aussie dreamboat Rick Springfield. If you know any woman between the ages of 45-55, chances are she’d still drop you in a hot minute for the singer whom General Hospital fans also knew as Dr. Noah Drake. The song hit No. 1 on the charts in August of 1981.