which pink floyd album is this pic.twitter.com/a0uQx6rsNp

On an otherwise sublime spring afternoon in Toronto, a white Ryder van jumps a curb and mows down more than a dozen pedestrians, taking 10 lives. That would represents one-sixth of all the murders in Canada’s largest city last year.

A funny thing happened, though. None of Canada’s news stations referred to it as “terrorism” and the police were able to apprehend the man, even though he appeared to be brandishing a weapon at them, without shooting him. How ever do they do it?

Gabriela Isler of Venezuela won the pageant, in case you want to win trivia at your local watering hole this week

*Of course, the judges will always accept “Pee: Did He?”

Donnie, you have some ‘splainin’ to do…Bloomberg News, which we predict will become the next news service to be referred to as “failing” or “lying” by an orangy septuagenarian, dug into the flight records and learned that Donald Trump arrived in Moscow on Friday, November 8, 2013, and stayed over two nights, leaving Sunday morning. That directly contradicts what he told James Comey privately on two different occasions, about not having stayed overnight in Moscow. Never mind what most innocent folks would have said: That’s ludicrous, man. I’m not about to soil good mattresses at a Ritz-Carlton and be charged a major replacement fee.

Why is this entire presidency always coming back to A Few Good Men? This latest episode has Lt. Weinberg running over to the Moscow Airport to retrieve the flight records and bringing in two Russian air-traffic controllers to sit in the courtroom as a bluff, no? And yes, Michael Cohen is totally the Kiefer Sutherland character. Or Lt. Markinson. We have not decided on that one yet. The Yankee rookie that generated all the print this spring was infielder Gleyber Torres (who collected his first Major League hit last night, a single). The newcomer the Bronx was  buzzing about was Giancarlo Stanton, who finally had a decent night at the plate last night in New York’s 14-1 victory (4-4 with a home run, although his most impressive plate appearance was rebounding from an 0-2, 2 outs count in the first inning to work a walk; three Yankee runs would follow).

But the BEST new player in pinstripes, the one who is about to Wally Pipp third baseman Brandon Drury, is 23 year-old Miguel Andujar. We’ve been tweeting about him in the last week as the right-handed hitter has consistently shown some pop in his bat. Last night he had a home run and a double, the seventh consecutive game in which he’s had at least one extra-base hit. Two other Yankees under the age of 24 have ever done that: Joe DiMaggio and Mickey Mantle. 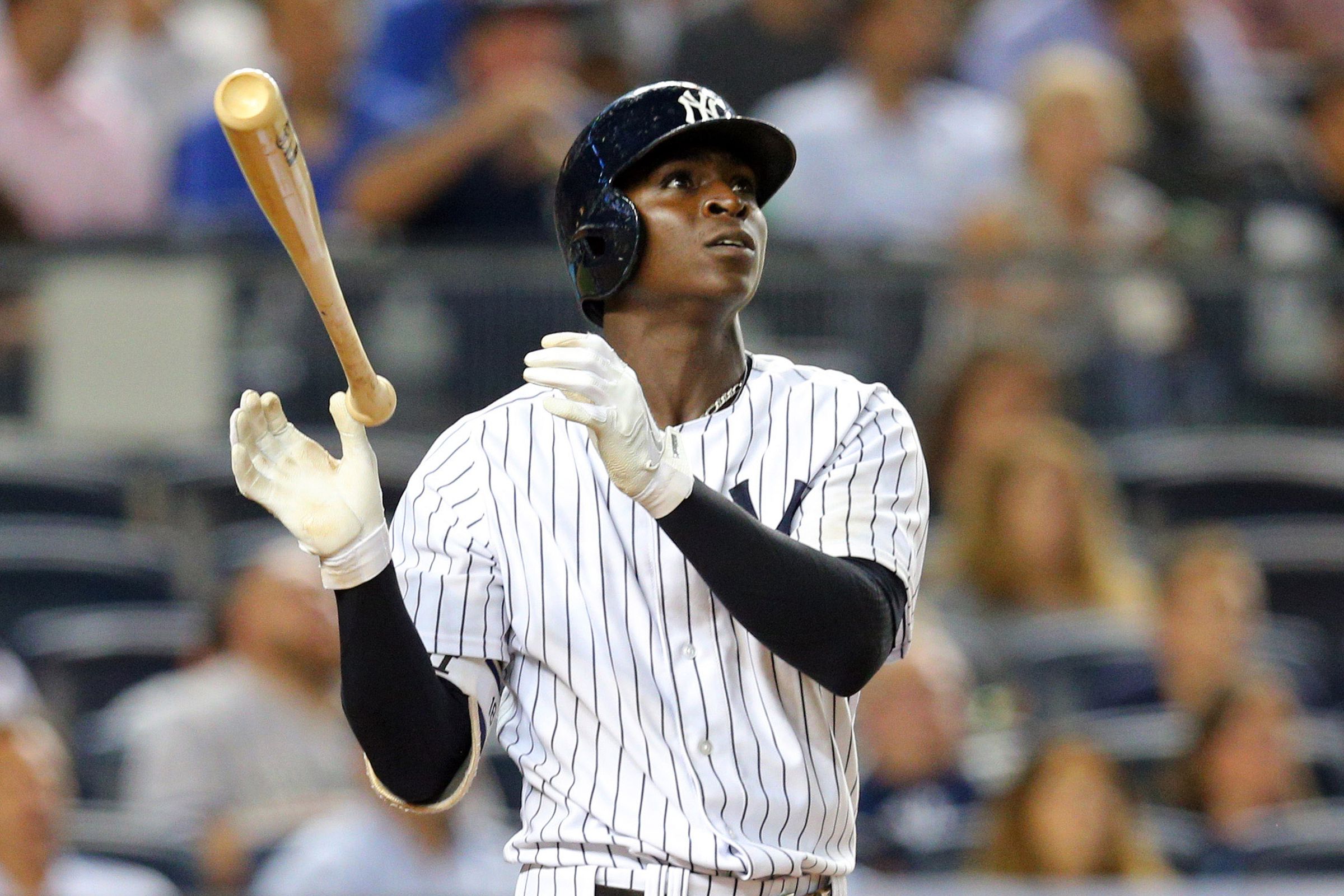 Didi leads the majors in RBI with 24, which is not a bad total after 21 games.

Since opening the season 0-fer-12, Andujar is batting .400 and tied for the league lead with 8 doubles. His 12 extra-base hits are just two shy of the league leader, Didi Gregorius, who, oh yeah, just happens to be his teammate and hit a grand slam last night.

The Yanks are only 12-9 and yes, we are waving the pom pons, but this lineup is going to be extraordinary (they still don’t even have Greg Bird back yet, although Tyler Austin hit a moon shot to left-center last night and has been filling in just fine). As I tweeted last weekend, I see Torres playing second in order to allow Andujar to stay in the lineup, so that you’ve potentially got a batting order of Brett Gardner, Aaron Judge, Stanton, Didi, Gary Sanchez, Aaron Hicks, Bird/Austin, Andujar and Torres.

When Gardner sits, the Yankees field a lineup of players all under 30. Have watched this team all our lives: this is potentially the most potent lineup of hitters they’ve ever had. They’re already six home runs ahead of Seattle’s pace that set the single-season home-run record of 264 in 1997. And anyone watching them this April will tell you they’ve been relatively cold, because it’s been unseasonably cold. Wait until these bats heat up. You’ll see them putting up 10 or more runs a game quite often.

Former Notre Dame and Seattle Seahawk defensive lineman Kona Schwenke, one of three Hawaiian islanders who were part of Brian Kelly’s first recruiting class (Manti Te’o and Robby Toma), died in his sleep this weekend. An autopsy is pending. He was 25.

To all who knew him, Kona was a gentle giant. My lone Kona Schwenke memory, from 2010, the last season I spent embedded in South Bend. It was October 27 in the early evening. A few hours earlier, during incredible gusts of wind, student manager Declan Sullivan had fallen from a hydraulic lift and died. Now it was about 7 p.m. and the night was actually quite placid.

THIS. I’m so in love with this. R.I.P. Kona pic.twitter.com/Y1WdDUjpiB

I was walking up the South Quad, having just returned from Fisher Hall (Sullivan’s dorm) in a failed attempt to speak with Sullivan’s rector. I’m pretty sure Brian Hamilton, then of the Chicago Tribune, was with me. Walking east, we passed South Dining hall and were approaching the little front porch at northwestern end of Dillon Hall (Kona’s dorm, and also mine). Standing or sitting there were three to four Notre Dame football players, saying nothing, just listening as Kona was gently strumming what I believe was a ukulele. As if he were playing a requiem.

Anyway, that’s what I’ll remember about Kona. Here are some other memories.

Meet Rob Pope, the real-life Forrest Gump. Pope, a British veterinarian, walked into a Mobile, Ala., barbershop on September 14, 2016, and from there he just started “ruh-NING.” Pope, 39, ran to Santa Monica.

From Santa Monica he ran to Maine. From Maine he returned to San Francisco. From San Francisco he ran to South Carolina. He’s had to return to England a few times, mostly to renew his travel visa, but on his next leg he plans to make it to Monument Valley.

Oh, and he can really run. This past weekend Pope ran a 2:36 at the London Marathon, which is an incredible time for a non-pro. Letsrun.com has the write-up. You’ll be seeing him profiled on the news shows before long.

Binge-ing our way through The West Wing has provided the ancillary benefit of reacquainting us with some long lost favorite tunes (and introducing us to a new one or two: tomorrow, more on that). This one is heard in the background at the opening of Episode 2, Season 2. It’s from Seventies one-hit wonders Hamilton, Joe Frank & Reynolds who might’ve enjoyed a more fruitful career if only they’d have thunk up a pithier band name. The trio of Los Angelenos had great success with this 1971 tune as it soared to No. 4 on the Billboard chart.

They’re actually very talented. Kind of reminds you of Blood, Sweat & Tears, no? (they’d have a bigger hit in 1975—look it up—but it’s not half as good as this tune)

*We need to create an MH Faves list. This one belongs. Few films inspired Mad Men as much as this 1960 Best Picture Oscar winner. Part comedy, part drama. Jack Lemmon, Shirley MacLaine and Fred MacMurray. Some Best Picture winners are snoozers. This one is not.

This is the undercard matchup of the Champions League semis (tomorrow you get the headliners, Real Madrid at Bayern Munich). Liverpool last won the CL in 2005. Roma never has but played in the final in 1984.