Lava gushes from an active fissure from Kilauea Volcano at extremely high speeds, flowing into the sea.

The lava has covered 9 square miles since eruptions started in May. https://t.co/N5JJiDbJAl pic.twitter.com/MBP3gQBn8v

In the first weekend of World Cup play, South American powerhouses Argentina and Brazil could only manage draws against Euro upstarts Iceland (at 335,000 citizens, the tiniest nation ever to play in the World Cup) and Switzerland. Meanwhile, defending champion Germany lost 1-0 to Mexico. Ronaldo scored a hat trick as Portugal gained a draw against finalist favorite Spain and Russia leads the tourney in goal differential thus far in plus-5. 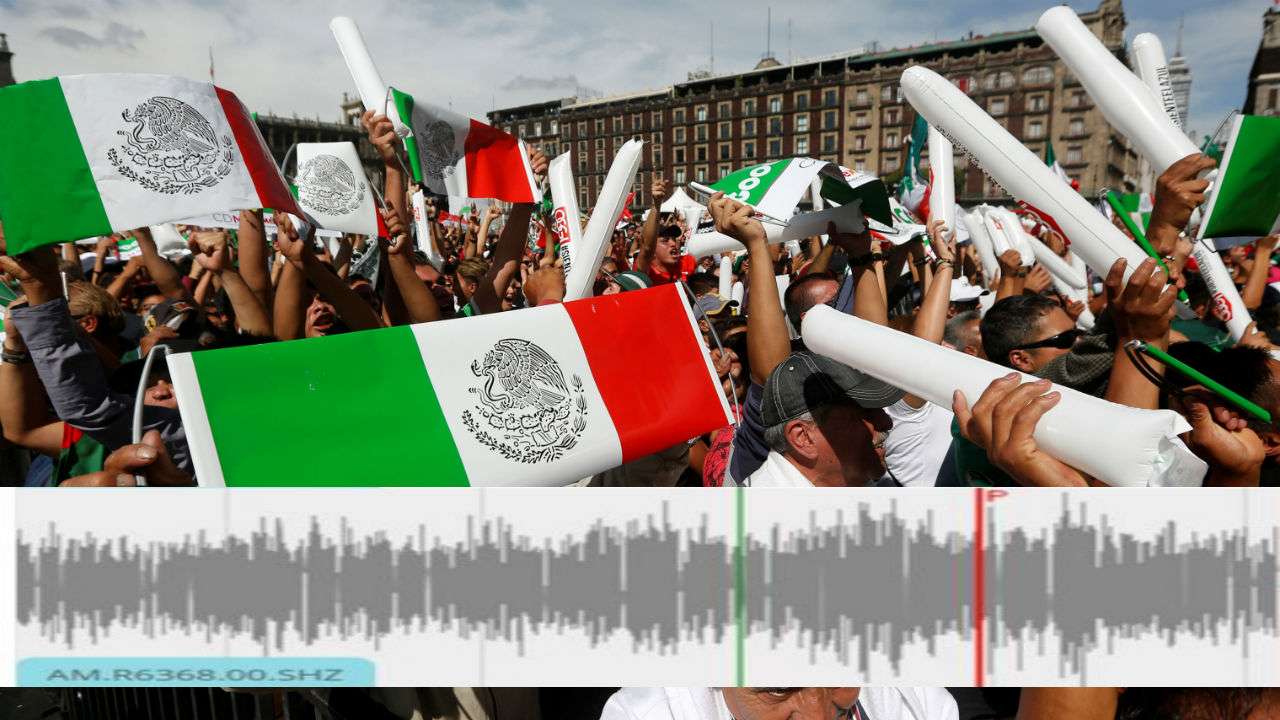 …and it triggered a “seismic event” in Mexico City, which knows a thing or two about them.

The biggest takeaway, with not all first round of games yet played, is the underwhelming play of the overdogs: Spain, Argentina, Germany and Brazil. But there are still two more matches for each of them in group stage. 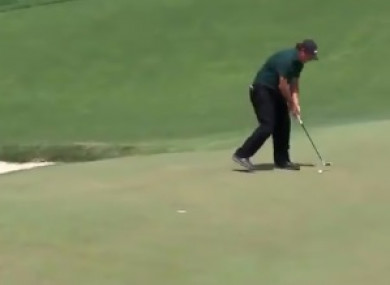 Who won the 118th U.S. Open? Who cares! Look what Phil Mickelson did on Saturday afternoon on the 13th hole during the third round. Anyone who has golfed even a little is able to understand this urge, and that it overtook one of the premier duffers of the past two decades, well, there’s a universal relatability to all of it.

We imagine Brooks Koepka will ring the bell at the Dow and be on a talk show or two. And he did become the first repeat U.S. Open champ since Curtis Strange in 1989. But on a course in which no one, not even Koepka, shot par all weekend, Phil stole the Open with this move.

We love it not because he broke the rule but because it was a spontaneous, instinctive act. Isn’t that why you fell in love with sports as a kid? Now if only he’d have buried that putt….

3. Meanwhile, Back At Shinnecock

We guess we were just wondering how necessary this story was. We’re almost annoyed with ourselves for giving it any more attention. The set-up: Dustin Johnson was the leader heading into Sunday and he’s married to Paulina Gretzky, who may have invented the Instagram bikini shot and is Wayne’s daughter.

She was out on the course, watching the final hole on Sunday with two friends and standing close to Koepka’s dad. When Justin holed in (he’d finish 3rd), Gretzky and her friends whooped and one of them asked, “Did Justin just win?”

The writer of the story is unable to identify who asked, but who cares? She’s a wife who, unlike almost all of us, is not watching it on TV with Fox graphics, but is just out on the course. At least she’s there. These are the kind of stories that slovenly sportswriters who’ve never gotten a date with any of the hot girls file because the 15 year-old in them is still upset.

4. The Daily Harrumph: Crossing A Line Do we really want to wade into this border mess? Okay. Sure.

The administration crossed an imaginary line (of public outrage) when it became apparent that it was separating children from their parents who were being detained for illegally crossing a figurative line (the U.S.-Mexico border).

Now, we will cop to this first and foremost: I am not a parent. But, just to be clear here, a few things to know: 1) I grew up in a border state (Arizona), 2) my dad was part of the Dept. of Corrections (yes, he had to work for Sheriff Joe) for nearly two full decades and 3) I currently work with a number of Mexican-Americans, many of whom are my closest friends (and while you can’t say that without sounding like, “Some of my best friends are black people,” the point is this: I doubt there’s another sportswriter in America, even a part-time one like I currently am, who works more closely with and has more Mexican-American friends than I do).

So, with all that said, I’ll say this: Not all illegal immigrants are MS-13 members but neither are they all doe-eyed dreamers. You can respect and admire their desire to give their families better lives, but do not for one moment think that most of them have not figured out that their best bet, their only bet, to gaining access to the U.S. is to cross the border illegally and then cry, “ASYLUM!”

They’re smart people. And they’re gaming the system. One thing my dear departed Dad taught us, without saying so in so many words, is to be a little skeptical. Not cynical, but to have a healthy dose of skepticism. And while I have plenty of skepticism about the Trump administration’s true motives here (red meat to their white nationalist base), I’m also skeptical of people who casually ignore that the pre-existing policy provided huge incentives for people to illegally immigrate here and that they’re shrewd enough to exploit it. Trump is absolutely right when he calls it “catch and release.” The worst penalty right now is you’re no worse off than if you never tried to cross the border and you’ll just do it again the first chance you get.

(This does not make you, an alien, a bad person. It just makes you a recidivist offender.)

So as a government your options are to either change the system or figure out a way to curb the influx. If it’s between what’s currently happening and a “Wall,” I’ll take this 21 times out of 2o. First of all, stop with the Nazi Germany references. No one’s being taken away from their dads and moms forever, no one is being killed, no one is being targeted for genocide and extermination.

These adults really are breaking the law, they are well aware that they are breaking the law, and they’re counting on a soft immigration policy to get away with it. Quite simply, the empire is striking back. And while no one likes to think of a suffering child, I don’t know why you reward bad behavior that is incentivized because of the very soft rules on ILLEGAL immigration we currently have.

You want more people from Latin American countries to be able to live in the U.S.A.? Fine. Change the law. But please don’t drone on and on about how the president does not respect the rule of law when it suits your purpose and then conveniently forget about law when it comes to this.

This has nothing to do with the character of the people who want to live here. Demonizing them (MS-13) is wrong, but so is beatifying them. It’s not about that. It’s about whether you believe the U.S. has a responsibility to its own citizens, its taxpayers, that trumps (pun unintended, but also, intended) the dreams of millions of people who WANT to live here and, unlike people in AFRICA or ASIA, are able to get here by foot. Because one of those sides will have to pay a price, at least short-term.

Why don’t the Democrats give us the votes to fix the world’s worst immigration laws? Where is the outcry for the killings and crime being caused by gangs and thugs, including MS-13, coming into our country illegally?

(This, for me, is where Trump blows it and is clearly only trying to be a fear-monger to aging white Americans, etc. Portraying them as gang members is not only inaccurate—are all white male teens school shooters?—but also beside the point.)

It’s funny how quickly liberals forget their adherence to law and the Constitution at the sight of a child crying. Yes, it’s awful. But it’s not what you base policy upon.

p.s. My great-uncle was put on a ship in Italy by his family and sent to the New World all alone. He was about 10 years old. After 2-3 weeks, maybe even a month, at sea, he landed at Ellis Island. No one from the extended family who was supposed to meet him there showed up, so they shipped him back to Italy. He spent probably 6 weeks on a boat at sea, back and forth, on a voyage all by himself. He’d eventually make it here and he turned out fine. Not equating his odyssey with what’s currently going on, but also trying to point out that the kids being detained probably don’t have gluten allergies and don’t throw a tantrum when they don’t get to play three hours of CandyCrush per day.

We were searching for a good example of improv this weekend and came across this long ago sketch involving Steve Carell. The actress, whom we don’t know, is fantastic. ‘nuf said. Enjoy.

How do you follow up the most transcendent American rock and roll album (Pet Sounds) ever released? You follow it up with a masterpiece that skyrockets to No. 1 in the U.S.A. and UK in the fall of ’67 (a pretty decent era for music) and, at 90 hours in the studio, was the costliest and most time-intensive single to that point ever produced. Architect Brian Wilson could have included this on Pet Sounds, but chose it instead as “B” side to a single. Even geniuses can be too smart for their own good (remember that, Susie B.). Wilson was inspired to write this tune after learning about how dogs respond to good and bad vibrations that other creatures emit.

If, like us, you’re sort of a B.B. groupie, this archival footage is pretty cool… Put on your Hazards

Jump back! What’s that sound? It’s Eden Hazard taking on the Panamanians, followed by Harry Kane and the Limeys taking on Tunisia. Belgium is the smart sleeper pick to advance to the final.