*The judges will also accept “Urban Blight” and “B1G Trouble,” but not “Fire Meyer!”

Here’s the problem with being sanctimonious (take it from a Notre Dame alum, we’re familiar with the syndrome): As soon as you stub your toe, the world is happy to tackle you.

Ohio State coach Urban Meyer, who fired wide receivers coach Zach Smith last week after unemployed college football reporter Brett McMurphy released some texts from Smith’s ex-wife, Courtney, about physical abuse, could have fallen on his sword and noted that he was too lax in taking action. Instead, he stood up at Big Ten media days and said, ““I got a text late last night that something happened in 2015. There was nothing. Unless… Once again, there’s nothing. Once again, I don’t know who creates a story like that.”

This was even worse than not using Ezekiel Elliott against Michigan State in 2015.

As soon as Meyer said that, he set himself up for yesterday’s avalanche. McMurphy releases a meticulously detailed and utterly convincing story—on Facebook!—with texts between Smith (who is not the same Courtney Smith as the one from Melrose Place, in case you were wondering) and Urban’s wife, Shelley Meyer, among others, dating back three years.

So now it’s either the coach’s wife knew and never told him (she’s a nurse with Ohio State, so this would make it a fireable offense for her) or, more plausibly, she did tell him and he did nothing. That’s before we even get into the tale of Urban’s hatchet man/lawyer Hiram de Fries persuading Smith not to press charges against her hubby six years earlier when all were at the University of Florida.

For us, this clip from 2009 or ’10 provided an illuminating window into Meyer’s sanctimonious soul. He berates beat reporter Jeremy Fowler for doing nothing more than accurately quoting one of his players and suggests that they’d be throwing down if the player were his son. Fowler, by the way, is a good guy. And when McMurphy left CBS for ESPN a few years back, guess who CBS hired to replace McMurphy? Fowler…who has since moved to ESPN.

What will forever link Fowler and McMurphy, besides the job-hopscotch, is that Urban Meyer publicly showed disdain for them. The reason? They were simply doing their jobs. And that compunction to humiliate the media (where have we seen that before?) instead of being forthright is what will cost Meyer his career. Worth it?

Sorry to drag politics into this, but Meyer reminds us much of vice president Mike Pence: humorless, rigid, judgmental, overly pious and more than just a little bit smug. I’ve never bought either man’s act. When you cannot have a sense of humor about yourself or compassion for the inevitability of human imperfection, we usually smell a hypocrite in the henhouse.

We’ll be surprised if Meyer, who has won three national championships at two different schools in the past 12 seasons and is now on paid administrative leave, survives this crisis with his job. 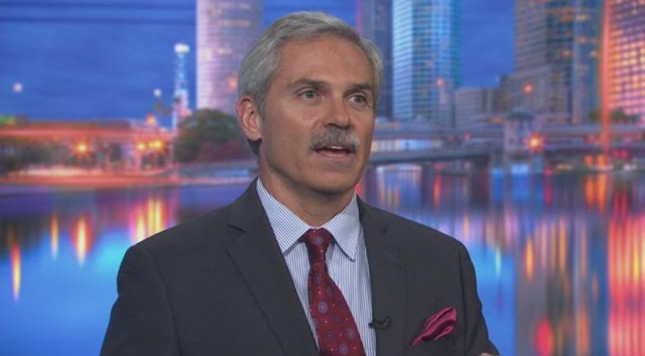 Meanwhile our old friend and former colleague at AOL Fanhouse, Brett McMurphy, had himself quite a day. By posting his story on Facebook McMurphy basically dunked on his former employer, ESPN, as well as on Meyer, of course, and really on every sports news outlet that exists. He broke the biggest college football story of 2018 and got paid in “Likes.”

Brett was one of 100 or so employees ESPN laid off in April of 2017, and while he is still being paid by ESPN through early autumn, it still was a major blow to his pride. Brett’s a bulldog of a reporter, the Woj of college football, really. ESPN just never figured out how to deploy him on TV (we loved Brett’s Saturday morning pieces with daughter, Chesney, but his true value is in breaking news before anyone else has it).

You can say what a sad state that sports journalism is in when one of its very best has to break a story on Facebook. Our reading of this is that Brett probably has a non-compete until the WWL money runs out and that he’s just too energized about college football to let a story worth pursuing go unchased. Bully for him. This was the best moment of vindication we’d seen since the final 15 minutes of The Shawshank Redemption. 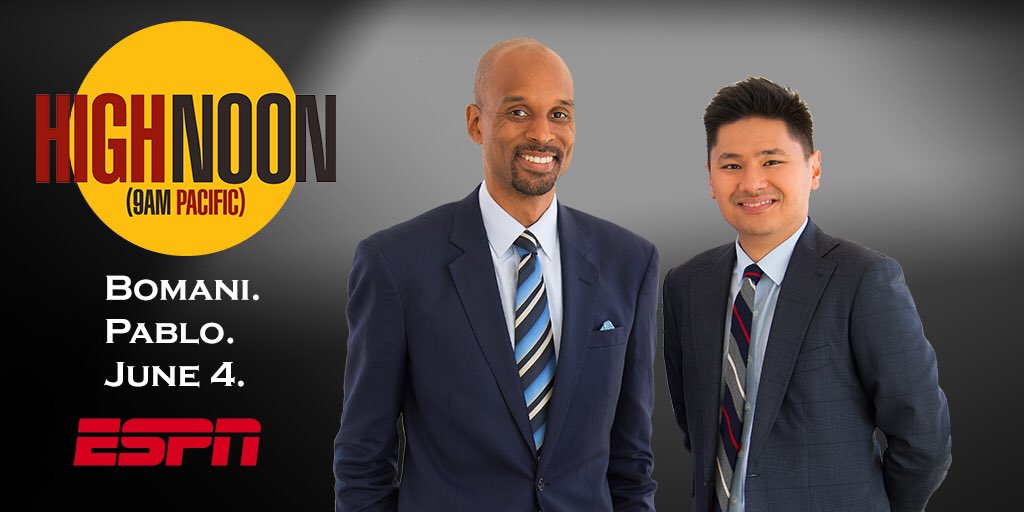 We were a little rough on our friends yesterday on the Twitter. But we do maintain that this was a moment that could have altered, for the better, the path of their program. Even if it required outright rebellion.

Brett’s story “broke” on Facebook shortly after 10 a.m. We tuned in to First Take about an hour later to hear a spirited debate (do they have any other kind?) on whether the Lakers would advance beyond the second round of the NBA playoffs next spring. Again, it was August 1st.

No mention of the developing Urban Meyer story.

We tuned into High Noon, a show that takes its name from an iconic movie in which the title character demonstrates uncommon courage, acting alone, even though the odds are heavily stacked against him (of course, but if he wins, he gets Grace Kelly, sooooo) because it’s simply the right thing to do, and again, no mention. Not even a drive-by such as, “There is a story from former ESPN reporter Brett McMurphy alleging that Urban Meyer knew all about the Smith domestic violence situation. This is a developing story that we have not yet vetted and we’ll have more to say about it tomorrow…”

That’s all they had to say. We were pretty rough on our friends Bomani and Pablo, and for that we apologize. Like other ESPN employees, they were acting under orders from higher-ups who put a strict ban on discussing this story until the news team had a chance to vet it (we suppose; even Bob Ley ignored it completely on OTL, and that must have killed him to do). We get it, but this is an extremely bad look for ESPN. You’re America’s sports channel, you have LIVE programming on a weekday, and you’re ignoring the biggest story of the day on an extremely slow news day….WHY?

It’s not even like you’re CBS being forced to report on the misdeeds of Les Moonves. Urban Meyer doesn’t even work for you (any more). By the time ESPN eventually acknowledged this story existed, after 2 p.m., they had nothing new to add to the story. They were just riding McMurphy’s wake.

What ESPN should’ve done: Report that the report is out there. Acknowledge that McMurphy, a former employee, broke the story. Provide the context of the Big Ten Media Days kerfuffle. Move on. The silence on this story was deafening. And because it wasn’t even personally embarrassing to ESPN (it’s not as if Chris Berman was accused of hitting his wife, for example), there’s no good excuse for not reporting it. Lord knows if some nobody even tweeted that Brian Kelly was covering for a coach that it would be all over SportsCenter. 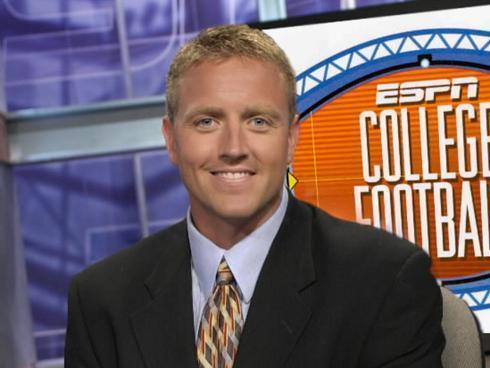 Where was Herbie? Where is Herbie? Will we see him today?

Lastly, ESPN needs to put Kirk Herbstreit, a former Ohio State quarterback, on TV to discuss this. I’ve attended one of those ESPN college football seminars (this is where the ESPN college football group apparently was yesterday, and for some reason last night Rece Davis was in Atlanta, so maybe they held it there?) and what I can tell you is that in that room, Herbstreit is the king of the jungle. He’s the voice of authority, the person the higher-ups look to for guidance and the lower-downs listen to with absolute fealty.

His input on this story is needed here. Like, yesterday already.

Press Sec. Sanders tells @CeciliaVega she’s “not sure” when Pres. Trump last went to the grocery store, following the president’s comment that “you need ID” to buy groceries.

“If you go to the grocery store and you buy beer and wine, you’re going to show your ID,” Sanders says. pic.twitter.com/cqcU2MtDKQ We don’t pretend to understand the stock market (okay, that’s a lie; but when situations like yesterday’s Tesla earnings report happens, we are at a loss). After the closing bell yesterday Elon Musk’s cool electric car company posted its LARGEST QUARTERLY LOSS since first firing up its battery-powered engines, and yet the stock has soared 10% this morning.

The company lost $717.5 million in the second quarter (will someone pay US to do that?), but the market liked that Tesla was able to meet its production goals of manufacturing 5,000 Model 3 vehicles per week. So they don’t mind the burn rate as long as the production rate matches expectations.

She Talks In Stereo

Early New Wave here with Gary Myrick and the Figures. That over-the-shoulder keyboard is all over the song. You could probably speed up the tempo, blast some guitar here, and you’d have a terrific punk song. From 1980. I hear a little Tom Petty in the vocals, no?

I Love You Again Smart, beautiful, funny and a redhead. Myrna Loy was never a Rita Hayworth pin-up type, but closer to Katharine Hepburn minus all the vinegar. She was the perfect complement to a leading man, from Cary Grant in the first film tonight to her frequent partner in crime (fighting) in the latter two films, the criminally under-appreciated and unknown (by almost anyone under age 50) William Powell.

Every wisecracking heterosexual crime duo (see: Moonlighting) should be paying royalties to this pair, who created the genre