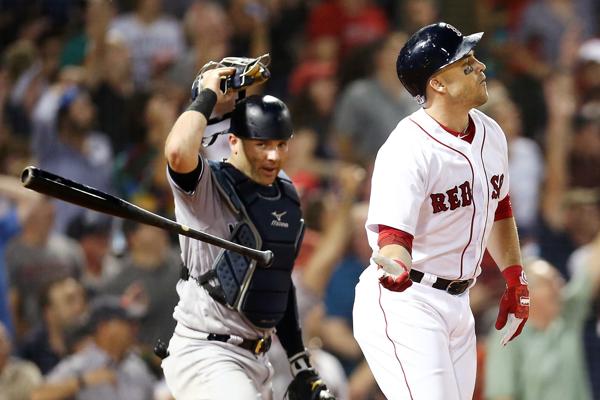 Bat’s Entertainment: Pearce had four home runs in the series.

The Yankees are swept in a four-game series at Fenway Pahk, and the only thing worse is knowing that Ben Affleck and Jeremy Renner are likely robbing the till this morning.  The Yanks lost in almost every conceivable fashion: an 8-run 4th inning on Thursday night led to a 15-7 blowout; a one-hitter on Friday (4-1); a listless performance on Saturday, where they went from down 4-0 with two outs and no one in the ninth to having the bases loaded and the go-ahead run at the plate, only for Greg Bird to send a lazy fly ball to center.

Finally, Sunday night: a 4-1 lead when closer Aroldis Chapman enters and promptly walks the number 9 hitter, then another one. Thirty-nine pitches and three runs later, it’s extra innings; and in the 10th the Sawx launch the winning rally with two out and no one on: single, wild pitch, seeing-eye game-winning single.

Just brutal. Boston now leads the Yankees by 9 1/2 games, and while the A.L. East isn’t over, the gravedigger just picked up the spade. No other division has as wide a margin between its first- and second-place teams.

p.s. The Bombers have not gone long in the past three games.

p.p.s. We wish George Steinbrenner were still around to witness this. He’d be going nuts this morning (“Costanza!”) and probably would have fired the bullpen. The back pages of the Post and Daily News would have his rage-quotes all over them. Are you really the Yankee manager if you aren’t required to answer George’s tirades to the press?

2. Oh, THAT Meeting With the Russians? His son and son-in-law attended, but how would you expect him to know anything about it?

In a stunning reversal—but not really—of posture, President Trump now admits that the June 2016 meeting with the Russians that took place in Trump Tower was about getting dirt on probable presidential election foe Hillary Clinton. This confession came via Sunday morning tweet.

Fake News reporting, a complete fabrication, that I am concerned about the meeting my wonderful son, Donald, had in Trump Tower. This was a meeting to get information on an opponent, totally legal and done all the time in politics – and it went nowhere. I did not know about it!

Donald, who just by osmosis should have earned three law degrees by now, added that it was “totally legal” (it’s not, because the people offering the dirt were foreigners) and “done all the time in politics” and how would he even know that, being the political outsider he claims to be?

And all those poor Russian children waiting to be adopted. How will they feel knowing the meeting (which, for now at least, Trump still claims he knew nothing about at the time, but it only took place a floor below his office and involved his oldest son and some of his closest campaign officials) was not about them? Guess they can feel some solace in knowing they’re not in detention facilities with no idea where their parents are. 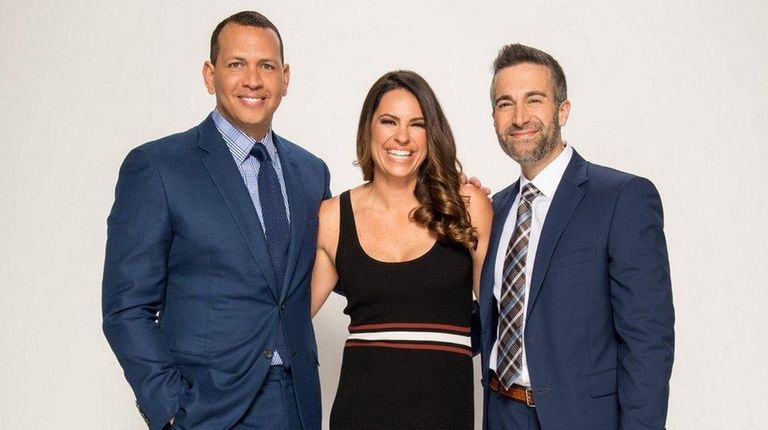 We only joined ESPN’s Sunday Night Baseball telecast—Matt Vasgersian, Jessica Mendoza, A-Rod—in the seventh inning last night, but here are the errors we picked up. We’ll begin with the most egregious:

–Top of the 9th, the Yanks lead 4-1 and have two runners on base and Vasgersian says, “Don’t look now, but the tying run comes to the plate in the form of Miguel Andujar.” Whhhaaaaaat?

–Vasgersian alluded to a scout’s mom as “being the woman behind all the men at the Padres for years.” A-Rod, to his credit, succinctly said, “Expand on that, please.” Yes, please do.

–In the top of the ninth inning, A-Rod discussed how the Red Sox were going to be very happy having won three out of four against the Yankees. He did not even place a conditional on that statement, even though he himself maintained more than once that “three runs at Fenway is like one run,” alluding to the Yankee lead. Of course, Boston would overcome its three-run deficit and win.

–Finally, on SportsCenter after the game, A-Rold told host Steve Levy that “the Yankees came to Boston trailing by 4 1/2 games and after being swept four games, leave trailing by 9 1/2.” If a first-ballot HOF’er can’t do simple Games Behind math, what hope do the rest of us have.

Let us say, though, that A-Rod’s an ex-ballplayer. His errors are somewhat more forgivable. Vasgersian’s gaffe is what happens when ESPN talking heads attempt to fill your living room with all the information they’ve digested in game prep to the neglect of discussing what’s taking place right in front of their eyes. It was the worst gaffe we’ve heard during a game in quite some time, not because it’s misidentifying a player or the score, but it’s presuming the team that leads by three runs is actually trailing by three. It’s like, Oh yeah, I wasn’t even paying attention.

We watch a lot of local Yankee broadcasts: Michael Kay, accompanied by a rotating crew of Paul O’Neill, David Cone, John Flaherty, Al Leiter and Ken Singleton. They do a phenomenal, and to Kay’s credit, highly professional job. They’re so much better than any ESPN crew we hear. Not knowing Kay but feeling as if I do (we’re the same age from the same area), I can only imagine he wonders how mistakes like the ones ESPN aired last night happen.

A 10 year-old boy from northern California broke one of Michael Phelps’ age-group swimming records (the 100-meter butterfly) by a whole second. His name: Clark Kent Apuada.

In the Swiss Alps, a vintage World War II plane carrying 20 passengers crashes, killing everyone aboard. As an eerie note, TCM was airing Where Eagles Dare that same night. Seventeen of the passengers were Swiss and three were Austrian.

If You Really Love Me

In the early Seventies, the dueling pianos of Elton John (ivory) and Stevie Wonder (ebony) ruled the pop music kingdom. This 1971 hit peaked at No. 8, so it is not one of Stevland Hardaway Morris’ (his birth name) ten No. 1 hits. What to remember as we prepare for the Season 4 premiere: Chuck’s dead, Kim’s injured, Mike and Gus are a team, and Jimmy’s on the path to breaking bad himself.