In the 1970s the first African-American cop in the history of the Colorado Springs police department successfully infiltrated the local chapter of the Klu Klux Klan, embedding himself so deeply into the hate group he actually had phone conversations with its top-ranking officer, David Duke. In so doing, the rookie detective helped prevent an attack on black activists.

The film based on that true story, BlackKkKlansman, has now been out for over a week as I write this, and now that its director, Spike Lee and its stars have done enough national press, it all sounds slightly less implausible. That cop, Ron Stallworth, did most of the legwork by phone, and his white partner served as his stand-in during meetings. OK, that makes sense. We like it when all the steps that led to a satisfying conclusion can be explained to us, from A to Z, especially at the movies.

And still … taking one leap back here … is this not the most amazing “truth-is-stranger-than-fiction” plot you’ve ever heard? When I first read what the movie was about on its IMDB.com page, I chuckled reflexively because it seemed so absurd. In a talented director’s hands, the script would have been the star. It could have played out as a police procedural sprinkled with moments of levity against all that racism and been a very good movie. Lee dug even deeper here, and after his A through Z, he does not give us that satisfying conclusion for very long.

Spike does this thing where he places his camera practically nose-to-nose with his performers, just his or her face in the frame. It could be in the middle of a thought or speech, and it forces everyone in the audience to PAY ATTENTION. That’s how he starts this movie — after a famous clip from Gone with the Wind — a close-up of Alec Baldwin as a narrator of a racist newsreel of a different era, at times fumbling his lines to comic effect but mostly just spewing all kinds of hate and misinformation. The short film sets the tone immediately – this is the thinking that Stallworth will be up against, and the buffoons that embody it – and it’s no accident that most of us now know Baldwin as the guy who plays our present-day President on SNL.

There’s a close-up of Stallworth soon thereafter, played with volts of electricity by John David Washington (Denzel’s son, as you probably already know), checking his Afro and then striding confidently into the Colorado Springs police precinct for the first time. You know then and there he would need every pound of that swagger in the days ahead. Then, once again, Lee shoots close on Stallworth’s face when the new cop is asked if he can handle being called the n-word by a fellow officer. He responds, “That would happen?” and the answer I won’t reveal except to say it should make fans of the HBO series “The Wire” happy.

The rookie finally gets out of the case file room when the force asks him to go undercover at a Colorado College event, where a man affiliated with the Black Panther party, Kwame Ture, is speaking. And man, that speech is a hammer. I watched the film in a packed NYC theater on a Friday night, and many in the crowd cheered along as the movie’s extras cheered along. And OK, again, there are tight shots of Ture (played by Corey Hawkins) as he motors proudly through his speech, with cutaways of close-ups of the faces in the crowd, at times floating on a black screen. Pay attention.

When Stallworth reports back to his bosses that while Ture’s words suggest a violent uprising is in the works, he believes it’s all just rhetoric. A white cop who would then be his partner/proxy for most of the film, played by Adam Driver, agrees. Driver’s character is revealed to be Jewish and he also gets that Lee close-up, halfway through a two-shot in the back of that file room (you knowthe director got the C/U take he wanted from Driver, a special one, as he may not have broken the continuity of the scene if he hadn’t). He explains to Stallworth that he never actually thought about being Jewish before until this assignment, and now, faced with the casual assholery and anti-Semitism of the KKK on a daily basis, he thinks about it all the time.

That’s a theme in this one. The KKK is shown as buffoonish and blind in scene after scene, with Stallworth on the phone and the Driver character in the field, always a step ahead to crowd-pleasing effect. And yet, the story explains, the KKK’s hate speech brings with it a devoted fan base capable of terrible things. In the film, David Duke, played low-key and milquetoast by Topher Grace, preaches white superiority almost casually to his devotees, as if ordering from a restaurant menu. The movie has a quick moment – almost stolen — where Stallworth tells a police sergeant he can’t believe such a hate-filled person could gain political power in the ‘70s. Then that sergeant warns if the country isn’t careful, and I’m paraphrasing, a person of that ilk could become the leader of the free world.

There are talented people out there who can write far more eloquently and forcefully about the current political climate, the fracturing of America, and how this movie ends, with Donald Trump front and center after the events of the white nationalist rally in Charlottesville. I will say in the year that followed so much horseshit has happened under this administration that there’s a real danger of becoming numb to the smell. Lee is one of those artists that will slap you out of that numbness. He’s been doing that to me since I first watched Do the Right Thing, on VHS, my jaw on the floor after Mookie threw that garbage can through Sal’s Pizzeria window.

By virtue of some filmmaking training, I now see Spike’s close-up shots when they happen, and I notice exactly when Terrence Blanchard’s score swells over certain moments. I understand how he made some scenes feel like a ‘70s exploitation film, and why he used his famed tracking shot in the epilogue. And how through editing and some fine writing he gave an epic and just middle finger to Birth of a Nation. Yes, I do see all of that technique and I respect it.  Still, Lee’s movies hit me harder in the gut. BlackKkKlansmanset out to make me uncomfortable, and succeeded. 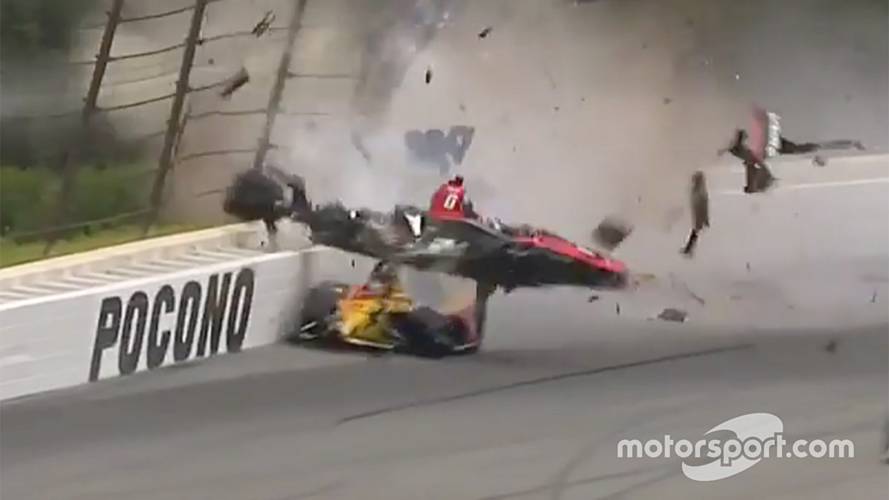 *The judges will also accept “Something Wickens This Way Comes…And It Appears To Be On Spinning” but not “Sunday Driver.”

Wickens was airlifted off the track and has injuries to his lower extremities and spine. After a two-hour delay, the race continued and Alexander Rossi won.

If you missed it, here’s Sister Mary Jo Sobieck of Marian Catholic High School throwing out the first pitch of the Chicago White Sox game on Saturday (True Confession: We had a crush on our 4th grade teacher, Sister Mary Jo, at St. James School; of course it would have never worked…the age difference and all; for all we know, this may be her).

You may remember that last April Sister Jean, the unofficial mascot of Loyola during its Final Four run, threw out the first pitch at a Chicago Cubs game. So of course the team from the South Side had to find a nun of their own. Breaking News: Sister Mary Jo will have to undergo Doubting Tommy John surgery.

4. An Inconvenient Truth Is Not Truth

Every time you think you’ve reached bottom with the clown show that is the Rudy Giuliani tent of The Worst Wing, the former mayor of New York City goes lower than the L train crossing the East River. Here he was on Meet The Pressyesterday, telling host Chuck Todd that “truth is not truth.”

Todd, to his credit, appeared to recognize that this was a new benchmark in prevarication for the Trump White House. Meanwhile on Twitter, Rudy’s boss referred to John Dean, the man whose testimony helped bring down the Nixon presidency, as “a RAT.” As someone on Twitter posited, “that’s kind of a tell.”

We’ll soon see the findings from Ohio State’s investigation of the Urban Meyer accusations, and emotions are high. Mine are too. Here’s why: pic.twitter.com/GVjC4KmGyb

Here’s ESPN analyst, human mountain and former NFL lineman Trevor Matich sharing his own story of growing up in a family of domestic abuse (you gotta think, HOW BIG was Matich’s dad and at what age was Trevor finally able to stand up to him?).

Ironic to see the #Vikings get bit by the Aaron Rodgers rule first. 15-yard roughing the passer penalty for using weight to drive QB into the ground pic.twitter.com/MmvwvINOPb

And here’s an outstanding sack by Minnesota Viking lineman Antwione Williams, who came off the edge unblocked, that was flagged as roughing the passer, a.k.a. The Aaron Rodgers Rule. This is ridiculous. Now the NFL doesn’t even know what a tackle is. They best get this straightened out before Week 1.

The best film we’ve seen at the theaters this year is not even a film yet: it’s the under-3 minute trailer for A Star Is Born, starring Bradley Cooper and Lady Ga Ga and directed by Cooper. The film itself premieres on October 5 and has thus far bypassed opportunities to be screened at major film festivals such as Cannes and Telluride.

Why? The studio, and Cooper, know that they have a monster hit on their hands and don’t want the hype to peak too early. We found this interview with Sean Penn, who has no connection to the film other than that he had a chance to screen it, telling. Penn doesn’t kiss anyone’s ass (unless it’s a Mexican drug lord).

This isn’t the first time we’ve hyped this film in this space, but we’re only doing so because we want to ride shotgun on this bandwagon. And, too, it’s rare that you watch a trailer that satisfies you more than most films do. Cooper is going to take home one, probably two Oscars next February. The film may also win Best Picture and don’t be surprised if Stefanie  Germanotta (Ga Ga) takes home a statuette, too.

Oscar Wins: Best Picture, Best Director, Best Actor, Best Actress and Best Song (with at least two being nominated in that category). Our only quibble is that 20 or more years after You’ve Got Mail, Dave Chappelle is still playing the black buddy/romantic adviser to the white dude in love.

They weren’t exactly the Go Go’s, but The Flirts had a hit with this song in 1982. The group was actually the brainchild of musician Bobby “O” Orlando, who wrote the songs, played the instruments and auditioned the ladies to carry out his brilliant scheme. The girls were interchangeable, as the The Flirts went through many incarnations as long as there was one blonde, one brunette and one redhead.

In the 1980s and early 1990s, this was a thing. A pretty big thing. Not anymore. But Ariana Grande and Nicki Minaj will perform from Radio City Music Hall, and Madonna just turned 60 last week, so maybe they’ll at least throw her a shout-out. She practically built that channel.