Week 3 Picks: When in doubt, don’t take your eyes off the QB

Example: Trailing the Packers 23-14 with 7:29 to play at Lambeau Field last week, Vikings QB Kirk Cousins faced a second and 10 from his own 25 and, at the snap, with Stefon Diggs running a go pattern, you could tell almost immediately that his throw would need to be Hail Mary-ish if he were to complete it to the streaking receiver. Diggs beat corner Davon House about 20 yards downfield, with House straining to keep up from there, and holy hell, Cousins uncorked a beauty. He let it go at his own 16, and Diggs caught it at the Packers 22 in stride. That’s a 75-yard touchdown pass on the box score, but it traveled 82 yards in the air.

Cousins is joining the immediate family of elite QBs

And it wasn’t even his best throw of the fourth quarter. That would be the 22-yard touch pass to Adam Thielen between two Packers defenders (Jaire Alexander and Kentrell Brice, who upon later review, may have held up a little because they knew they could hit each other) to cut the Pack lead to 29-27. The Vikings would then tie the game off a nifty pivot route by Diggs, who Cousins hit with ease for the two-point conversion. Cousins then had another impressive 25-yard completion to Thielen in OT, but it still wasn’t enough. The Vikings kicker missed a 35-yarder several plays later and the game wound up a tie.

We will need to wait until late November to see if Cousins can keep up with Packers All-Pro Aaron Rodgers once again. If he does, that may mean the division title and an automatic playoff berth. Maybe the Vikings sideline walked to the team buses numb and sore due to the 29-29 tie, and furious at the kicker (who was promptly released), but no question there’s an underlying confidence there due to Cousins. And it could carry them for months.

A good QB = hope. An amazing QB = swag. It’s a quarterback’s world, and the rest of us are watching it.

It’s soooo early, but to this point, here are the QBs that have impressed me most so far on film. Let’s see if these teams end up in the playoffs come January:

I’ll wait another week before I put the legend of Ryan Fitzpatrick and his chest hair on the list, and ditto with Blake Bortles and the Red Rifle, Andy Dalton. But I’m not saying it won’t happen.

And all of this is prologue to my QB-centric picks this week. When in doubt (and I’m doubting now, having gone 1-2 last week) … go with the QB who can make an entire NFL sideline believe.

You try to talk yourself into something, but the film shows you otherwise. I was ready to bury the Detroit Lions this year, and then I watched the second half of the team’s loss at San Francisco. There, Stafford completed the passes of a franchise guy who has reached his full potential athletically … and is now a smart QB to boot.

If I squinted Stafford looked just like Rivers against the Bills last week (a much-weaker foe than the Niners), a combination of hunger, a big arm, and brains. Perhaps the Lions will be beat down later in the season, privately griping about the system and the coaching staff with the playoffs out of reach. But Stafford found the right balance of experience and desperation in that second half. That should carry over if the Leos trail early against the Pats. I’m considering taking the over (53) on this game.

Still, the Lions defense has been a story this week in Detroit, and not a warm and fuzzy one. The safeties and linebackers look lost under Matt Patricia’s new staff, and the stats bear this out. According to Pro Football Outsiders, the Lions are ranked 32nd, 22nd, 31st and 27th against opposing No. 1-3 receivers and tight ends, respectively. That’s … not so good.

I see Patricia matching Bill Belichick move-for-move for a half, but in the fourth, Brady will hit tight end Rob Gronkowski over and over, and Gronk will go full barbarian. This will lead to an awkward Belichick-Patricia postgame handshake. And a Gronkowski bear hug that Patricia will want no part of. And that phony smile Brady trots out to any vanquished coach he already knows.

The ball sizzles out of Josh Allen’s hand. It’s so pretty on film. So pretty a pro scout might want to put a ring on his melt reel. But obviously the rest of his game needs work. Like a lot of rookie QBs, Allen looks like he’s playing waist-deep in mud. So, the Vikings D will mix it up — at times playing chess and other times just flat-out attacking the rookie — and Allen will react like DeNiro in GOODFELLAS after he finds out Tommy was whacked.

One thing I did notice of the Vikings D, that running back LeSean McCoy could exploit: Minnesota defensive end Danielle Hunter lines up so wide it’s like he’s covering a slot receiver … he’s consistently 7-8 yards away from the nearest defensive tackle. That’s a lot of cutback room for McCoy. And I noticed #29, Xavier Rhodes, can get beat consistently because he plays off coverage so deep and … oh, who am I kidding? This is a matchup between a Super Bowl-caliber defense and a rookie QB. Plus, Cousins is rolling. I won’t overthink this, even at -16.5.

For the second straight week I thought Arizona’s goal-line defense just gave up way too easy in a critical moment. In this case, it was a fourth-and-goal with :03 to play in the half, with Todd Gurley ducking his head a little and romping in to take a 17-0 lead, and then slashing inside for the two-point conversion (strange – the Cardinals D showed more pride on the 2-point try). 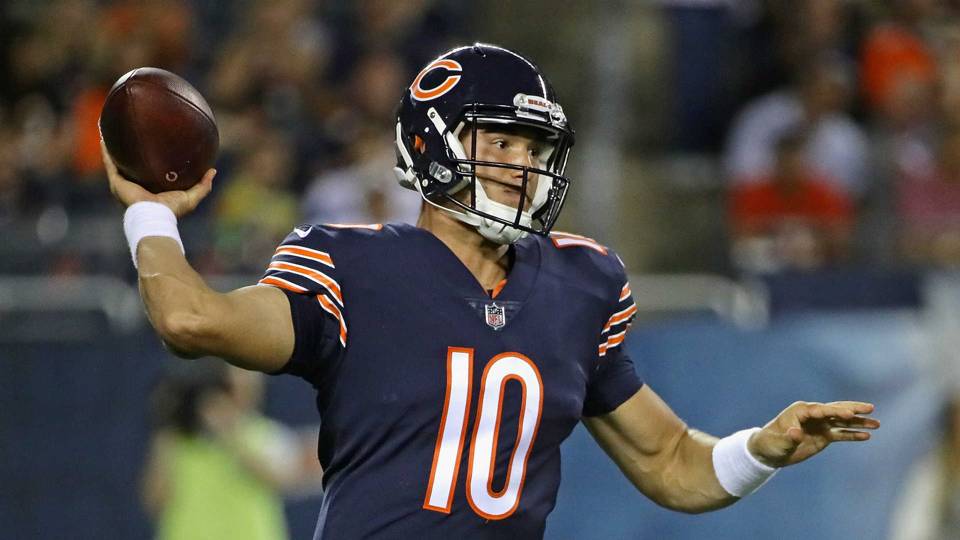 Bears at Cards once gave us Denny Green’s infamous post-game presser: “They are what we thought they were!”

There is no elite quarterback in this one. Sam Bradford is a flat tire at the moment (when did he decide Larry Fitzgerald is not their No. 1 receiver?) and Chicago’s Mitch Trubisky is still looking for his “This is my f-cking team” game. Maybe this victory is it. But I doubt it, simply because he doesn’t need to play like a Pro Bowl passer to win this one — more likely he’ll dink and dunk to his two running backs, Jordan Howard and Tarik Cohen, against a Cardinals defense that is ranked 31st against RBs in the passing game. That duo, and a hungry, talented defense should be enough for Chicago to win by a touchdown. Wait, did I write should? They *will* win by a touchdown.

Even at Arrowhead, even against Mahomes, I see the 49ers covering here. Of all the players I watched this week, besides Cousins, I was most impressed with Niners running back Matt Breida, mostly because he was such a surprise, especially on off-tackle runs (“Who is this guy?”). He’ll do well against the tissue-paper Chiefs defense, who forced Mahomes to play like a 21st Century Dan Marino over the first two games.

I don’t believe the hype yet. Show me something special at home, Kansas City. Go home and get your f-cking shine box.

Related: Picking games against the spread is extremely difficult (thanks, Captain Obvious!). If you take nothing else out of this post, it’s that I have been humbled by this experience already, and when you throw your own moolah into the mix, you will second-guess your logical, well-researched choices.