Week 14 Picks: The Dump Off Game

Forget Delta Airlines. The dump off is the only way to fly in the league. It’s about the running backs chipping, then slipping through the middle, and when the QB can’t find anyone else in 1.81 seconds, he dumps the ball off to the guy with his hands in the air.

Yes sir, yes ma’am, it’s all about the screens and dump passes now. High percentage, vanilla, easy-like-a-Prom-Date throws. Just watch this week, with playoff positioning at stake out there in all that December frost. Risk is a four-letter cuss word to a playoff contender. No, better to safely plop a 4-yarder to a talented back, and let him scamper off with it. Happens every minute of an NFL Sunday. 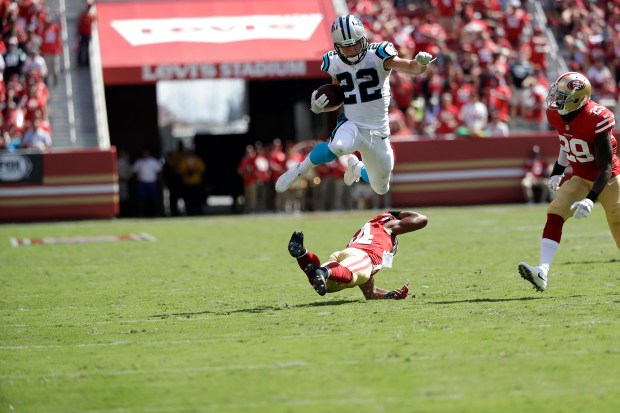 And yes, sure, I have angered the football gods by writing that, and in retaliation I expect at least a dozen 50+ yard touchdown passes in Week 14. But once I finally come out of hiding, right before the start of playoffs, I will revisit my dump-off theory by digging into the numbers of the playoff teams, to see if my eyeballs aren’t lying to me. Scouts will tell you it’s easy to pick up a back in later rounds and even in the undrafted free agent market each year, but still, runner-receivers like Todd Gurley, Christian McCaffrey, Saquon Barkley and The Ghost of Le’Veon Bell are changing the game as this is being written. That I’m sure of.

As always, home team in caps, with William Hill odds. I also added some percentages to correspond with the winners I picked – they represent the calculations made by The Quant Edge that those teams will cover the Vegas line. Full disclosure: I work at TQE as an advisor.

He was limited in practice on Friday, but the Giants downplayed it and it seemed like a non-issue. Odell even made headlines earlier in the week about ruining another team’s season. So, how did it all break bad? Why aren’t the beat writers being snarky about it? What happened?

Something’s up. Did Odell try bad peyote while on a wave runner with an Instagram model down in the Keys … and then told the Giants he hurt himself while getting treatment on his groin? WTF, OBJ? Is it that serious? The G-Men were starting to find a rhythm offensively.

Regardless, the Giants are facing Mark Sanchez. That defense will bottle up Adrian Peterson — who as a thirtysomething is pumping those legs like John Riggins 2.0 — and then let Mark get jumpy, which he is prone to do even behind the best of o-lines. That’s enough for a win by a TD.

What in the name of Dan Fouts and all that’s holy is this Vegas line all about? The Chargers win this one at home, of course. But even without A.J. Green, Cincy should move the ball and keep it within two scores. I see Giovani Bernard and Joe Mixon having big days catching dump-offs — that play *is* the offense of 2018. But again, LA should win it by a score or so, get to 10 wins before Christmas, and no one in Los Angeles will give a sh-t.

Put ‘em back in San Diego, NFL (Editor’s Note: Yes, yes, a thousand times yes! It’s okay to admit you made a mistake; build a new stadium, too!)  Announcers still say, “San Diego Chargers” by mistake, I still write San Diego Chargers by mistake, and besides, Philip Rivers commutes every damn day from SD, and he has eight kids that must toss him  a “Why weren’t you at my soccer game?” guilt locker every time he gets home. Let’s pretend the LA Chargers didn’t happen. Think of Papa Philip.

The Chiefs have scored 40, 45, 30, 37, 26, 51 and 40 points over their last seven contests (a 38.4 average). I love what the Ravens have done with Lamar Jackson amidst their three-game win streak, but they don’t have the firepower to stay with the Chiefs at Arrowhead. There’s a contrarian take here – with jackass Kareem Hunt out of the picture that offense is not nearly as dominant, and the Ravens D is ranked third in DVOA, according to Football Outsiders. But I’m not overthinking this one. Mahomes will move on up in the NFL MVP race if he smashes here.

Nah. Nope. No upset. The Panthers can still secure an NFC wild-card berth, and McCaffrey is the NFL’s best fantasy player, the most fun to watch, and a Hall of Famer at reminding you how old you are, because you watched his dad Ed play an eye-blink ago.